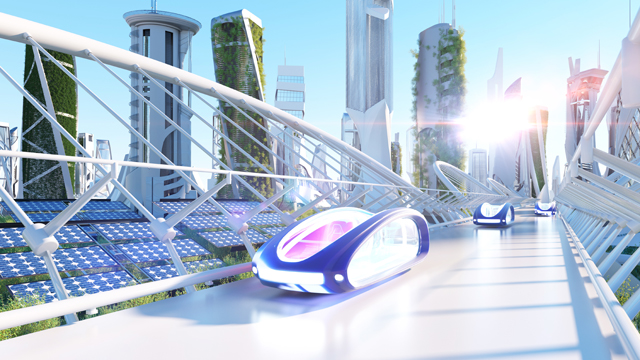 The future of transport: driving change in the next 10 years

This next decade transport will be revolutionised with radical new inventions powered by renewable energy, in response to the twin concerns of pollution and congestion.

Watch the video: The Future of Transport

Since the advent of commercial flights in the 1950s, transport hasn’t radically changed. Our cars, ships, trains, planes and even bicycles may have had their functionality improved over the years, but they have essentially remained the same since their invention. But we’re about to see the pace of change revving up dramatically.

Why transport needs to change

Now we have the speed and immediacy of the internet, it’s easy to forget how Henry Ford’s ‘car for the great multitude’ changed ordinary people’s daily lives. Cheap, attainable transport for the masses transformed our society, freeing us to literally widen our horizons and employment possibilities.

But the consequence of this mass adoption has led to pollution and city congestion, both unsustainable for the sake of our planet and human health and happiness.

Transporting people and goods is the largest contributor to UK carbon emissions, responsible for 28%. In the US too, transportation is the second-largest source of greenhouse gas emissions (after power generation) and accounts for 70% of all domestic oil consumption.

So, will we see Bladerunner-style cars skimming through the skies in the near future? Probably not yet, although imagining sci-fi modes of transport will always capture our imaginations.

Back to earth, here are some of the revolutionary carbon-reducing changes we are likely to experience in how we get from A to B in the next 10 years.

We’re already experiencing the beginning of a revolution in transport and these changes are likely to ramp up dramatically between now and 2030. E-hailing rides, car sharing schemes, electric vehicles (EVs), electric scooters, drones and even autonomous buses are already here.

Delivery by drone is one of the immediate next advances, intended to reduce delivery van congestion and pollution while allowing us to keep the convenience of home delivery.

The transition to EVs is also accelerating rapidly, with electric vehicles set to be the cars of our now and immediate future. Sale of new petrol and diesel cars will be banned by 2030 in the UK, with £1.3bn ($1.5bn) UK government funding to support smart charging infrastructure for electric vehicles.  New York has also announced that sales of nearly all gas- and diesel-powered cars and trucks in the state will be banned by 2035. The state says it will be spending about $1bn (£0.8bn) across all types of zero-emissions vehicles over the next 5 years.

National Grid has an important role in enabling the rollout of future clean transport, by ensuring clean power can be efficiently moved from where it’s generated to where it’s needed by the transport sector; for example, the EV charging infrastructure along the Strategic Road Network (SRN).

Fuels for the future

Petroleum was first discovered in 1859, but our reliance on this fossil fuel has to end if we’re to tackle climate change. Alternative renewable energy sources will continue to be investigated and implemented to fuel our transport. Electric battery-powered cars are currently in pole position in the fuel race.

But biogas, which is renewable and carbon neutral, and hydrogen are two petrol-alternative and revolutionary possibilities for the future.

Biogas provides an immediately available solution for HGVs and long-haul vehicles, which would also serve as a ‘stepping stone’ in the transition to hydrogen, as its infrastructure is adaptable for future hydrogen needs without the need for rebuilding.

Hydrogen is potentially and environmentally an ideal fuel. Current challenges for hydrogen at scale are manufacturing it into a useable form for transport.

We have two UK projects underway: FutureGrid, which is trialling hydrogen mixes in off-grid gas pipelines, and Project Union, exploring the development of a UK hydrogen ‘backbone’ joining together industrial clusters around the country.

In the US, we have the HyGrid Project in Point Lookout, Long Island, which will blend green hydrogen into the existing gas distribution system to heat approximately 800 homes and fuel 10 municipal vehicles. This project can potentially be applied on a larger scale, as we work toward decarbonising the energy system.

Hydrogen may well be the future solution for heavy goods vehicles and long-distance journeys, including transporting people and freight by rail. Early hydrogen hubs for transport can be expected by the early 2030s and we estimate that 50 hydrogen refuelling stations will be required in the UK by 2030.

There are currently 107 hydrogen fuelling stations in the US, most of which are in California as that’s where almost all fuel cell vehicles are currently. However, the US government’s goal is for there to be 200 hydrogen stations in California by 2025, with a total of 1000 envisioned by 2030. Once refuelling stations are then added in other states, the number of fuel cell vehicles will grow across the country.1

In the future, it’s possible we’ll see large-scale charging hubs for HGVs, buses and public fleet, such as council and blue light vehicles, all in one location to minimise disruption. We may see the end of bus depots in central locations and the opportunity for town and city planners to create pleasant, social spaces.

AVs combined with artificial intelligence (AI) will provide a future of convenience and comfort when it comes to future transport. Banished to yesteryears will be bus timetables and shelters, and nose-to-bumper stress driving. Self-driving public vehicles running on advanced algorithms will pick up people who are going in the same direction.

In the future, robot vehicles may look entirely different from the hands-free/big-screen version we expect. Envision a transport capsule that blurs the boundaries between home, car, entertainment centre, workplace and wellbeing hub – and a whole new in-car services industry.

The UK government’s Future of Mobility fund has already funded three self-driving pilot projects: DRIVEN, a trial fleet of fully autonomous vehicles in urban and inter-urban areas that will culminate in autonomous journeys in Oxford and London; RoboPilot, creating autonomous driving for an electric delivery van that could be adapted to buses and larger trucks; and, StreetWise, a demonstration of the technology, safety validation, insurance and service models for autonomous personal mobility to replace the urban commuter car.

In the US, Ford, Argo AI and Walmart are collaborating on a delivery service located in Austin, Miami and Washington. The service will use Ford's self-driving vehicles paired with Argo AI's self-driving system technology. According to executives, delivery capacity is projected to expand over time.

Autonomous ships are expected to be crossing seas in the near future. Advanced AI can calculate optimised routes and maximise speed by using weather and sea currents data. Using maritime data already produced through ships’ smart systems could be the biggest wave forward in commercial shipping since the introduction of containers.

Elon Musk called his open-sourced idea for a Hyperloop train system “a cross between a Concorde, railgun and an air hockey table”. By 2030, Virgin Hyperloop could be whisking people and freight from London to Edinburgh in 45 minutes, or between New York and Washington DC in just 30 minutes. Reaching speeds of up to 670 miles per hour, the futuristic pods in Virgin Hyperloop are powered by electromagnets that push them through a vacuum tube, which eliminates the air resistance experienced by other modes of transport.

Perhaps we really will soon be zipping through the skies above our homes in electric plane pods.