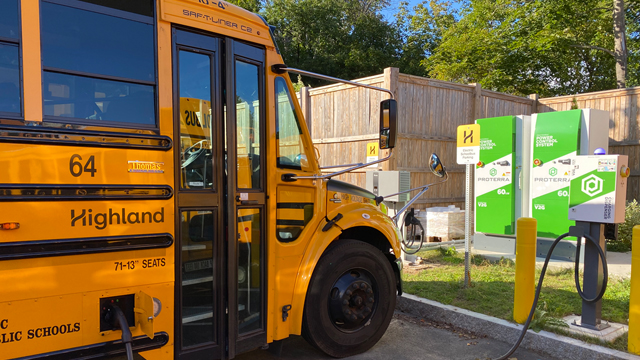 As of June 2022, U.S. school districts have committed to 12,275 electric school buses in 38 states1. Half a million school buses transport about 20 million children to school every morning, traveling about 3.4 billion miles per year.

This being said, school buses which run on combustion engines play a considerable factor in releasing carbon emissions. Electric school buses could offer a cleaner and cheaper way to help children arrive to school safely, while playing a part in the journey to net zero.

What are electric school buses?

As with other electric vehicles (EVs), electric school buses use electric motors to function, instead of an internal combustion engine. They use an internal battery to run, which can be recharged at EV charging stations. The typical charging time lies between 4 to 8 hours and the average starting range is about 60 to 70 miles2, which can safely serve more than 90% of bus routes in the U.S.3

Diesel buses can drive at 8.2 miles per gallon, while electric school buses drive at 20.87 miles per diesel gallon equivalent, making them 60% more efficient.4

Why are school buses in the U.S. going electric?

Implementing electric school buses in communities has the potential to make a positive impact in several significant ways:

1. Reducing carbon emissions on the road to net zero

Transport currently accounts for a significant proportion of global CO2 emissions, so electric vehicles are increasingly seen as playing a key role in helping to tackle climate change and reach net zero carbon emissions. Indeed, the U.S. is aiming for half of all new vehicle sales to be electric by 2030.

For the next five years, the US Environmental Protection Agency (EPA)’s Clean School Bus Program is offering up to $5 billion to replace older buses with electric school buses, through rebates and incentives. Directed by Congress, this program will prioritize low-income, rural and tribal areas.

Harmful emissions, such as the type produced by diesel buses, have a direct effect on children’s health and even academic performance. Children who are exposed to fumes released by idling buses have been shown to have a higher risk of asthma, decreased lung function, immunologic reactions and leukemia.6 A study conducted by Georgia State University shows that not only do diesel emissions affect students’ health, but it could also decrease test performance. Test scores among students who used electric buses were slightly higher when compared to students who used diesel buses.

How is electric school bus adoption taking shape across the U.S.?

Almost every state across the country is committed to increasing electric school bus use. Leading states include California, New York, Virginia, Florida, Maryland and Illinois.

Maryland’s Montgomery County Public Schools announced in 2021 that they have committed to replacing diesel buses with electric ones, starting with 326 over the next four years.8 This is considered the largest purchase of electric school buses in North America. While this only replaces a fraction of the 1,400 bus fleet, it certainly is a great start.

In April 2022, New York Governor Kathy Hochul agreed a $220 billion state budget with legislators, which includes a plan to make the state’s approximately 50,000 school buses 100% electric by 2035. The State of the State Book – a document released by the governor – declares: “There are roughly 50,000 school buses on streets in New York State, polluting the communities they operate in with harmful emissions. It is estimated that fully electrifying school buses in New York City alone would be the equivalent of taking nearly 650,000 passenger vehicles off the road.

National Grid’s role in the development of electric buses

Leslie Vishwanath, Lead Project Manager for Electric Vehicles/Fleets in New York, explains her feelings towards the future of electric school buses and electric buses in general: “You don’t realize how many school buses go up and down your streets all day long. They are driving by and everybody associates the smell of a school bus from their childhood. And to think that suddenly, the future generations aren’t going to be associating that dirty fuel smell with their trips to school, that it’s going to be a quiet, clean ride.”

In Batavia, NY, New York Bus Sales LLC created a $4.5 million, 20,000-square-foot electric vehicle dealership, which will support school districts and bus operators across Genesee County, Western New York and Finger Lakes regions as their fleets are converted from diesel to electric. National Grid provided funding for multiple charging stations, which was made possible through our Electric Vehicle Make-Ready Program. This program provides funding for up to 100% of the electric infrastructure costs for approved projects. With nearly $7 million, the Clean Transportation team can assist lower- and middle-income communities in buying electric buses and charging stations.

In Beverly, MA, a school bus has delivered power back into the electricity grid in a partnership between National Grid and Highland Electric. During the summer of 2021, the school bus in Beverly provided approximately 3 megawatt hours of electricity back to the grid, as part of our demand response program.

While this is only the beginning, we’re on our way to a cleaner and brighter future, replacing one yellow school bus at a time.

Read more about our project to turn school buses green

1 Up to $5 billion is available for US electric school buses... | Word Resources Institute