Net Zero know-how: why the future’s bright for renewable energy in the US

Exploring how National Grid is working towards net zero, here we talk to David Reamer about battery storage advances and the increasing demand for renewable energy.

David is Head of Development of US Onshore Renewables for National Grid Renewables, our renewable energy business focused on accelerating the clean energy transition across the US by developing, owning and operating large-scale renewable energy assets – including solar, onshore wind and battery storage.

“I enjoy being part of a company that is full of engaged and passionate co-workers who build things that customers want and that make a difference in our world,” says David, who was previously President of Geronimo Energy and has a 25-year career in renewable energy and technology companies, as a founder, executive, board member and investor.

“The future for renewable energy projects and battery storage facilities is really exciting,” says David. “There are several factors that contribute to this positive outlook, including corporate and utility customer appetite for more renewables and increased sustainability goal setting, as well as the pure economic value these advancing energy technologies provide.

“We are seeing more and more states, corporations, utilities and organizations set ambitious climate change and renewable energy goals – and these targets are what will drive renewable energy procurement.

“And the impact for America’s farmers is huge – the income landowners receive from renewable energy projects provides stability and predictability in an industry that is incredibly susceptible to the ebbs and flows of the agriculture market and the unpredictability of weather conditions. Rural farmer-friendly states don’t need convincing that renewables make sense for local economies, offering affordable energy and job creation.”

When asked if politics play a role in the future of renewable energy, David says: “Renewable energy, although traditionally thought of as a left-leaning topic, is actually a bi-partisan area of interest. Renewable energy policies are vetted and decided upon by constituents from both sides of the aisle and are oftentimes long-term and independent of an individual president’s administration’s view.

“For example, even though the previous administration wasn’t as outwardly supportive of renewables as perhaps other administrations, we actually saw significant growth during those years. The reality is that the adoption of renewables is at state level, not federal policy; local state offices and governors really drive renewable energy growth.”

In fact, according to the US Energy Information Administration (EIA), wind and solar will represent more than two-thirds of new energy production to come online in 2021, while battery storage capacity is set to quadruple over the next year. It’s predicted that, at current pace, wind, solar and storage could overtake conventional technologies as the leading source of energy generation by the early 2030s.

“As an established leader in the renewable energy industry, we’ll continue leading the way to a clean, fair and affordable energy future for all,” says David.

The US Bureau of Labor Statistics ranks ‘wind energy technician’ as the fastest-growing occupation in the country,” enthuses David. “From January to September 2020, wind power capacity jumped by 72% over the same period in 2019, and that’s not including the wind projects currently either under construction or in advanced development.”

‘Wind energy technician’ is the fastest-growing occupation in the US.

“Prairie Wolf is currently under construction and will be operational by the end of 2021,” he says. “A huge thank you goes out to our construction team and their dedication to ‘making it happen’ and keeping this project on schedule. Prairie Wolf will provide significant economic benefits for the local community and the carbon offsets we’re going to see from the project are extraordinary. 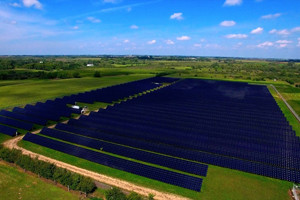 The outlook for solar energy projects is bright

Renewable energy growth is at an unprecedented rate in the US. Solar has grown nearly 50% annually every year for the past 10 years, according to solar industry research data.

David says: “The outlook for solar energy projects is bright. The cost of installing solar power has dropped by more than 70% over the last decade, making solar energy one of the cheapest forms of new electric generation available in the United States today.

“Additionally, Congress just passed an extension of the Investment Tax Credit (ITC), which combined with the advancements in solar technology and subsequent price decreases makes solar energy a very attractive and economic choice for many of our customers.

“Utilities and public power agencies are able to procure some of the lowest cost electricity for their rate payers and corporations are able to economically achieve sustainability goals.

David anticipates accelerated growth in battery energy storage systems, paired with renewable energy projects. He points to the US EIA 2020 Battery Storage Market Trends report, in which market growth projections are exceeding 30% annually over the next few years.

He says: “Rapid increases in manufacturing capacity are driving sharp decreases in energy storage costs and, simultaneously, customers are looking for reliability solutions as part of their transition to renewables. These two trends are creating a very promising opportunity for us to deploy energy storage in addition to solar and wind.”