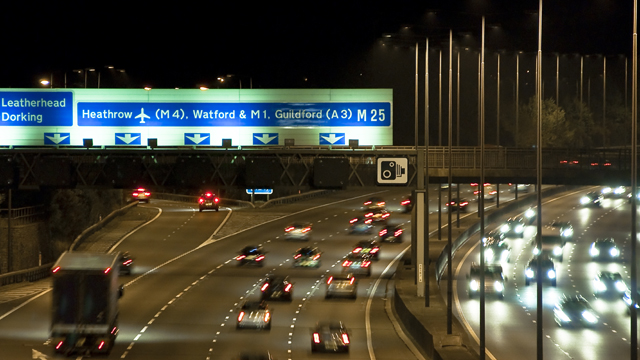 Dynamic charging could be the future for emissions-free driving. Innovation Engineer Mingyu Sun leads a pioneering project in our Innovation team, exploring the potential to charge EVs as they drive by installing electric layers beneath our road systems.

That rising feeling of panic when your fuel gauge is alarmingly low and you’re miles from the next service station could become something of the past. That’s the goal of a ‘dream solution’ dynamic charging project underway by our Innovation team.

Dynamic charging is when a battery-operated electric vehicle (EV) is continuously charged as it’s being driven, using electrical transmitter coils beneath the road surface.

Innovation Engineer Mingyu Sun has been working with Cardiff University, collecting data and running computer simulations for dynamic charging of electric cars and even heavy goods vehicles in a two-year study.

Their 20-mile test track is modelled on one of our most polluted sections of motorway – the London orbital M25, between junctions 10 and 16 passing Heathrow airport.

Transporting people and goods is responsible for around 28% of our carbon emissions in the UK, equating to 126 million tonnes of CO2. It’s clear that a radical change in transport – from carbon-free vehicles to a new green charging infrastructure – is essential if we’re to protect our planet from harmful greenhouse gas emissions and reach net zero.

The Government recently announced an end to the sale of new petrol and diesel cars in 2030, speeding up the changeover to electric cars by 10 years, so Mingyu’s pioneering project comes at a crucial time.

“We can see how many vehicles use this motorway every hour and every day, and multiply the energy consumption of each car to get the total consumption. Using desktop analysis and data from Highways England, we’re able to create different scenarios – peak traffic times, speed ranges, days of the week and even whether to use one slow lane or four lanes,” Mingyu explains.

After creating current ‘baseload’ power – a steady and controllable electrical output – Mingyu’s team then generates profiles for future loading, as we increasingly choose electric vehicles over polluting petrol and diesel cars. The team also makes an economic analysis of slow and rapid charging rates; a future project would include costs for drivers.

“The power for dynamic charging is provided by renewables, like solar power,” explains Mingyu. “Large-scale battery storage combined with renewable energy is also essential to enable a constant power flow day and night. They’re modular in design, the size of a truck, and can be stacked on top of each other, so space isn’t a concern.”

The intention of this dynamic charging project for Mingyu and his academic partners at Cardiff University was proof of concept. Put simply, would electric vehicles be able to continuously charge without emissions and is the infrastructure available to support dynamic charging? The answer is a resounding yes.

Road transmitters work in the same way as microwaves

“The idea behind this project is fantastic – a dream solution to pollution,” says Mingyu.

“The principle of dynamic charging is actually not modern – it emerged in the 19th century and there was actually a patent to power trains from 1894 in the US. But then combustion engines took off so quickly, with no concern for the environment.

“The circular coils work in the same way as a microwave, but on a larger scale.”

And if all this sounds too sci-fi and not rooted in reality, a dynamic charging road near Stockholm in Sweden opened in 2018 and construction began this year to enable electric buses to dynamically charge on a busy route in Tel Aviv, Israel.

“The final stage is identifying next steps and how to implement prototype trials,” Mingyu explains. “We will be sharing our knowledge at conferences and to utility companies, including publishing our findings on Energy Networks Association, from where interested companies can ask for a full technical report.

“As the transmission network, our interest is about how we create future operations to smooth the green energy transition already happening within the transport system. We’re at the start of a long journey – but it’s very exciting.”