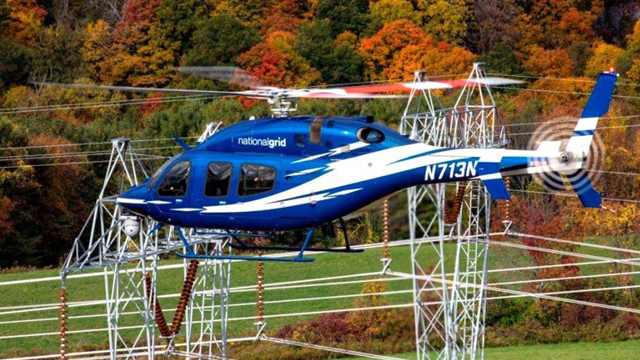 Our helicopters play a crucial part in carrying out inspections and repair work on overhead power lines in both the US and UK, and they’ve been used in parts of our business for decades now.

Find out how helicopters are making it safer, faster and more cost-effective for us to keep the electricity network maintained and operating effectively.

How many helicopters does National Grid have?

In the UK, we have a fleet of eight helicopters in total:

In the US, we run one Bell 429 helicopter of our own, alongside agreements with approved helicopter contractors.

What are National Grid’s helicopters used for?

Our Electricity Transmission business uses its helicopters to conduct inspections of power lines, providing imagery for the Condition Monitoring team. 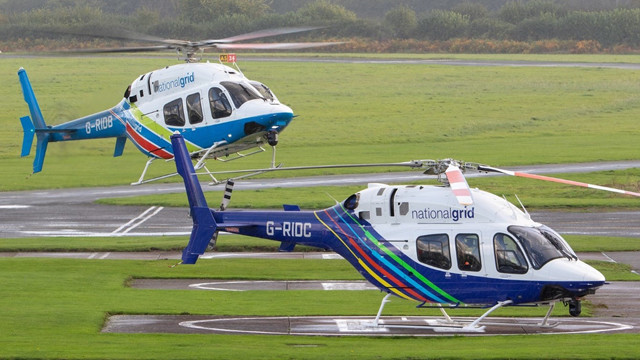 The team uses advanced electro-optics – such as HD video or thermal cameras – to get the best possible information about the safety and reliability of our overhead line network, as well as being used to evidence any investment requirements we put to Ofgem, the energy regulator.

In the past, we used to replace entire pylons but now, with the quality and detail of the imagery we can collect, we only replace the sections that absolutely need it. This allows us to save on costs and have less impact on landowners.

We also use our helicopters for emergency response for fault location, post-storm inspections and proactive patrols ahead of extreme weather. They’re sometimes also used to deliver linespersons to live conductors, for repair work using a specialised team and equipment.

Electricity Distribution’s helicopter unit, based at Bristol Airport, patrols over 45,000km of overhead network every year. Its main function is to proactively and reactively check the overhead line network and substations in our distribution region.

It also helps with lifting and patrolling support for projects, and dealing with the impact and aftermath of severe weather.

The helicopter unit is operated by 19 full-time staff, including the unit’s ‘accountable manager’, five pilots, observers, assistant observers and an in-house maintenance engineering team. The team will be celebrating its 60th year of operation in 2023.

National Grid’s helicopters in the US

In the US, our helicopter unit patrols over 21,000 miles of transmission lines per year. This includes performing annual regulatory inspections and, when needed, post-fault inspections of the transmission system. The team is able to assist with storm recovery activities too.

The US helicopter is also used in quarterly gas pipeline inspections and assessment of ‘Right of Way’. Patrols are performed visually and with onboard specialised thermal imaging equipment.

The helicopter is equipped to communicate directly with our Mobile Emergency Operations Center and, in the event of a major power outage, it’s even capable of providing live video and audio feed in real time for damage assessment.

Why do we need helicopters?

Helicopters allow us to view and inspect parts of our network quickly, safely and at a lower cost than would otherwise be the case.

… it might take three lineworkers one day to carry out climbing inspections of three towers, while an airborne observer can inspect six pylons in just one hour.

In the past, the kind of inspections that are now performed by helicopters or drones were undertaken by linespersons climbing up the pylons or towers. Inspections from the air have made the process much quicker. For example, it might take three linespersons one day to carry out climbing inspections of three towers, while an airborne observer can inspect six pylons in just one hour.

Electricity Distribution’s team provide another example; they can survey about 130-160km of power line in a normal five-hour flying day, split into two flights, whereas two linespersons and a Land Rover would take 10 days to cover this.

Helicopters have sometimes also allowed us to carry out live-line repairs to overhead lines. This involves suspending engineers in a basket underneath the helicopter and placing them alongside the lines. Such live-line work enables us to carry out critical repairs without taking electricity circuits out of service, so that National Grid can maintain an uninterrupted flow of electricity.

What happens if it’s not possible to use a helicopter?

There are some instances when using a helicopter just isn’t feasible, for example, they can’t get too close to built-up urban areas and in rural areas they can disturb livestock.

In many situations, only a linesperson physically performing an inspection will be suitable. For other situations, in both the UK and US, we also have a dedicated team to operate National Grid’s fleet of drones.

Our drones are typically equipped with high-resolution and thermal image sensors to capture still, video and infrared data from a variety of different angles, to get the best possible view. This helps us assess faults – such as damaged equipment, wear and corrosion on steelwork and fittings – or identify high-resistance ‘hotspots’ on high-voltage assets.

In the US, our Unmanned Aircraft Systems programme supports our US business units and has a fleet of eight aircraft/drones. These are flown by two-person crews and are regulated by the Federal Aviation Administration. They’re sometimes supplemented by the use of approved contractors’ drones.

All this said, helicopters can sometimes have advantages over drones; for example, they can cover longer distances and don’t require access to the land close to the powerlines we’re inspecting.

Our helicopters are flown by our experienced, commercially-rated pilots. When joining National Grid, they undergo specific training to learn the techniques employed as standard operating procedures. The pilots must meet a certain minimum amount of flight experience and flying hours, and also demonstrate proficiency prior to operating a helicopter servicing our powerlines and equipment.

5 ways we keep the electricity network protected from storms

Storms can mean disruption and unpredictability for our electricity system. We take the job of ‘keeping the lights on’ very seriously and we have a number of approaches in place to deal with potential issues that severe weather might cause – from power cuts to pylon damage.