Skip to main navigation
The project
The projectLandownersWhat happens nextDocumentsFAQsContact us

Our proposals are to create onshore underground pipeline infrastructure in the Humber region to transport captured carbon dioxide and hydrogen. Together, these pipelines will help the Humber region to decarbonise, supporting a low carbon future, the region’s economy and the UK’s vision for net zero by 2050.

Our proposed pipeline infrastructure will consist of two underground pipelines – one for carbon dioxide and the other for hydrogen.

The onshore pipelines would run between Drax Power Station and Easington on the Holderness Coast. They would connect with SSE Thermal and Equinor’s proposed Keadby 3 Carbon Capture Power Station, British Steel in Scunthorpe, the Humber Hub Blue Project at Uniper’s Killingholme site and Equinor’s Hydrogen to Humber (H2H) Saltend. Further connections could be made in the future.

This map shows the proposed route presented at the second stage of consultation (October 2022): 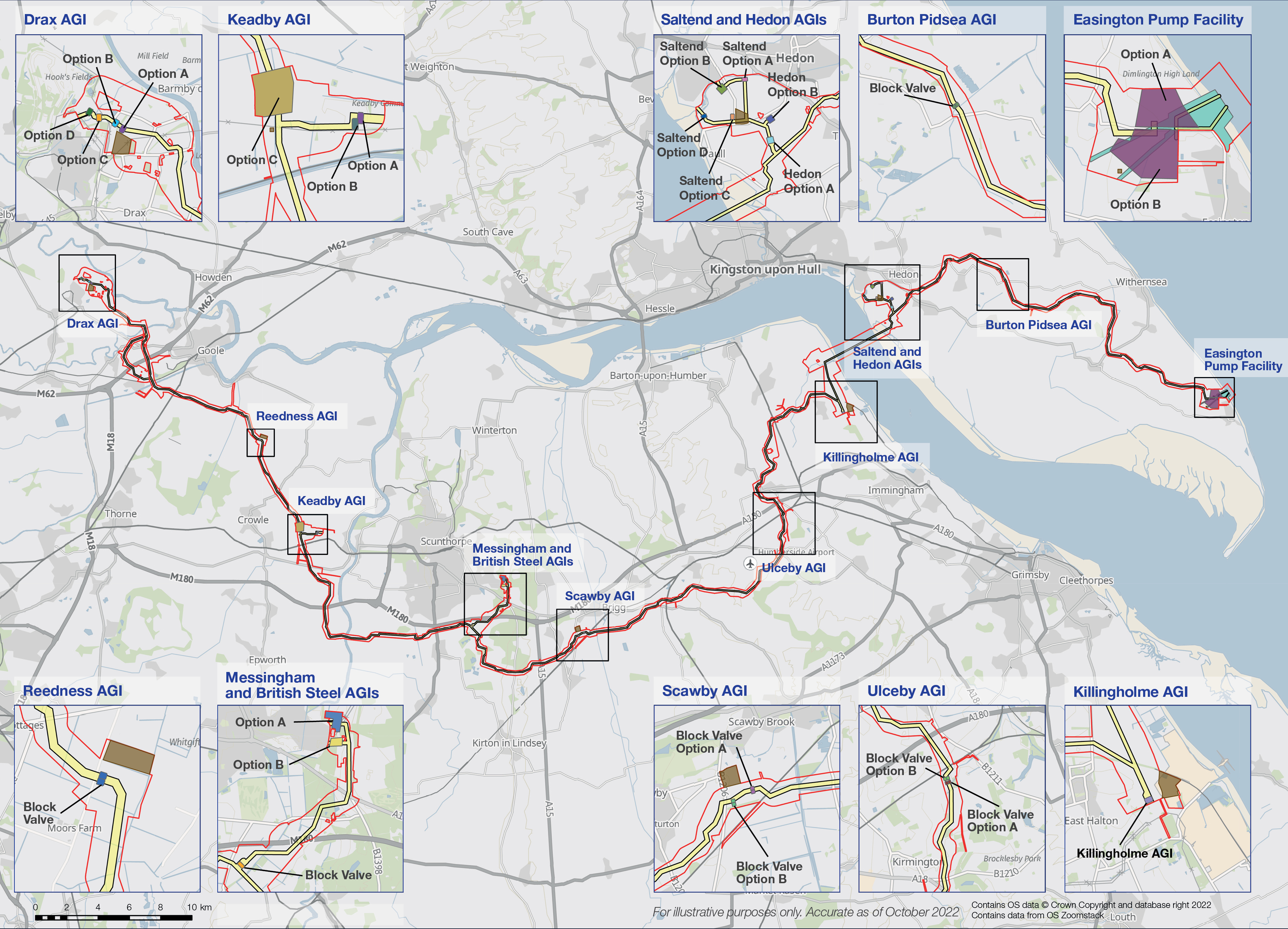 Maps of the proposed route are available here.

The pipelines will continue to a landfall point on the Holderness coast. The onshore carbon dioxide pipeline will then connect via an offshore pipeline to the Endurance offshore storage location.

The project will also include a number of above ground installations and a tunnel under the River Humber.

Developing this infrastructure is essential for accelerating the decarbonisation of industry and creating and protecting thousands of jobs in the region, as well as making the Humber a hub for clean energy technologies.

In October 2021, the government department for Business, Energy and Industrial Strategy (BEIS) confirmed the East Coast Cluster – which comprises Zero Carbon Humber and Net Zero Teesside – as one of the UK’s first carbon capture, usage and storage (CCUS) clusters for deployment in the mid-2020s.

Our initial appraisal started in 2019 when we identified a wide range of possible pipeline route corridor options and assessed the broad constraints across a study area spanning north and south of the Humber.

Through further analysis we identified physical, environmental and social features that could influence the routeing options, alongside technical constraints, the location of industrial emitters and consideration of other existing or proposed developments in the region. This led to the emergence of two potential route configurations:

Configuration A (including potential sub-options): this route would run underground from Drax power station to Killingholme, cross the Humber via a tunnel then continue from Saltend to a landfall location. 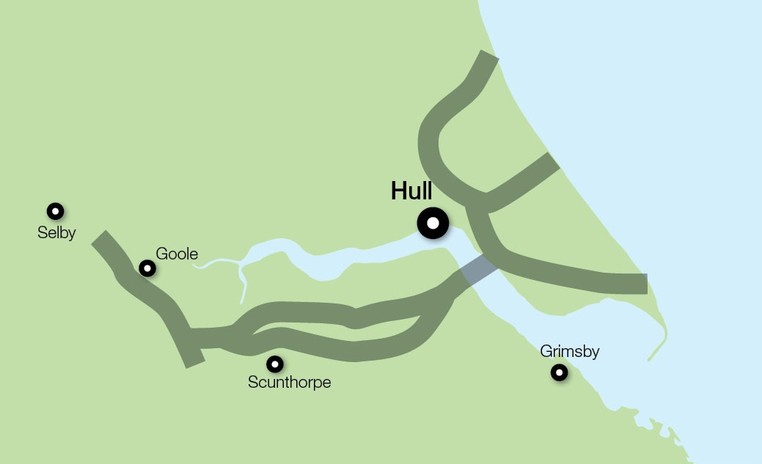 Configuration B (including potential sub-options): this route would run underground from Drax power station to Killingholme in the south of the Humber, cross the River Ouse, travel north of the Humber to Saltend and then continue on to the landfall.

In addition, we selected three potential route corridors to landfall from the various options identified in our initial appraisal. Further analysis allowed us to further refine this to two potential landfall options at that stage.

Following the initial appraisal, Configuration A was identified as the preferred option on the balance of environmental, social, technical and cost factors. Configuration B options were approximately 50 kilometres longer than the Configuration A route corridor options, with consequently greater impacts on environmental receptors, disruption during construction and cost.

Both Configuration A and B involve crossing the Humber Estuary, which benefits from the protection of several important biodiversity designations. A Habitats Regulations Assessment will be undertaken as part of the development consent order application to assess the effects on designated sites.

At our initial stage of consultation, held in autumn 2021, we brought forward route corridors and options based on Configuration A.

As part of our first round of consultation, we invited feedback from local residents, stakeholders and other interested parties on these route corridor options and any other matters relating to the project. The Consultation Feedback Report provides a detailed summary of all feedback received as part of this initial consultation, and explains how National Grid Ventures had regard to the comments. 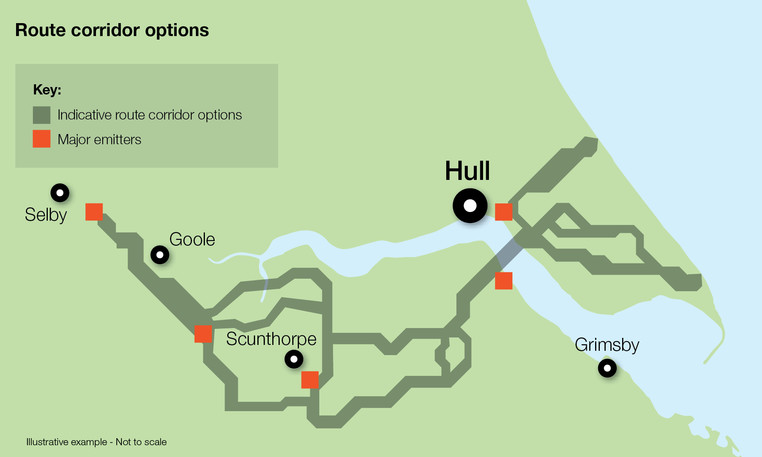 We would need to construct a number of AGIs at intervals along the proposed route including at the start and end of a section of pipeline. These will allow us to safely and efficiently operate the pipelines as well as conduct routine inspections and maintenance. The proposed sites for the AGI are marked on the section maps here.

There are four different types of AGI that are included within our proposal. Each AGI will comprise equipment and pipework, at least one small instrument building and a vehicle access point. Each site will be surrounded by security fencing of up to three metres (nearly 10 feet) high and if required, surrounded by a natural planting strip to reduce visual effects. Existing woodland will also be used wherever possible to provide natural screening.

A pipeline inspection gauge (PIG trap) enables internal monitoring and inspection of the pipeline. They will be required at points on the route, such as Drax Power Station, and also form part of other types of AGI. PIG traps will be approximately 120m by 165m. The maximum building height would be approximately 8m with a temporary vent stack height of up to approximately 5m. They will include a pig trap arrangement, pipework and valves which will be predominantly buried. This image shows a single pipeline system. 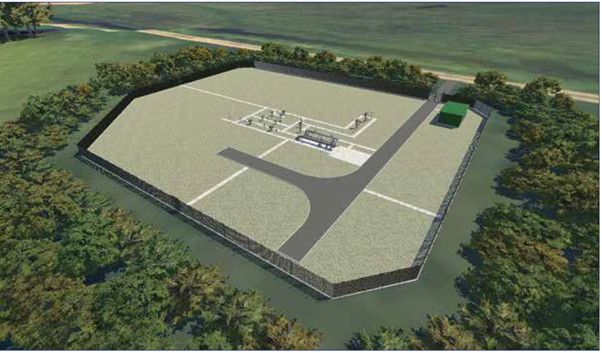 A block valve is required at regular intervals to enable sections of pipeline to be isolated for operational and maintenance purposes. They are required near Reedness, Keadby, Messingham, Scawby, Ulceby and Burton Pidsea. Block valve installations will be approximately 90m by 90m for the hydrogen and carbon dioxide pipelines separately. The maximum building height would be approximately 8m with a temporary vent stack height of up to approximately 5m. They will include pipework and valves which will be predominantly buried. This image shows a single pipeline system. 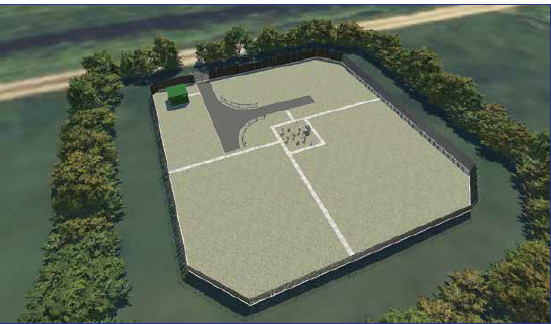 The maximum building height would be approximately 8m with a temporary vent stack height of up to approximately 5m. This image shows two pipeline systems, hydrogen and carbon dioxide. 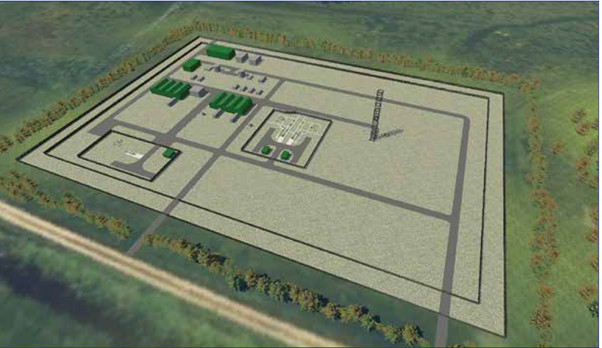 AGIs will not normally be occupied. AGI inspections would be carried out at regular intervals, with valves checked once a year and a visual check of an AGI being carried out on a monthly basis. The AGIs will include appropriate security measures.

Temporary vent stacks will be used at all AGI locations, with the exception of the Pump Facility, which will have a permanent structure. The carbon dioxide and hydrogen vented will be small in volume, short term and infrequent, taking place roughly every ten years.

Caring for the environment

National Grid Ventures has conducted extensive assessments of the potential environmental impacts of the project. This has informed the route selection and helped us to identify where we can eliminate or reduce a particular effect.

For the second stage of consultation, we published a detailed Preliminary Environmental Information Report (PEIR), and a non-technical summary. Please read these documents for more information on potential environmental impacts and mitigation, including through construction, operation and decommissioning of the pipelines.

National Grid has extensive expertise in designing, building and operating safe and effective high-pressure gas pipelines in the UK.

Our approach is to work closely with the local community and other interested parties throughout the planning and construction process. Through construction, we will manage environmental impacts and work to minimise any disruption caused.

How is an onshore underground pipeline built? 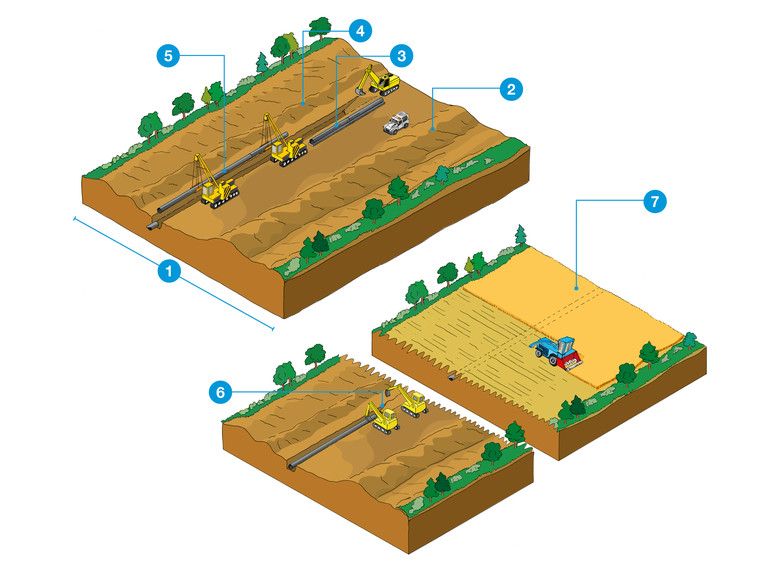 This is an illustrative diagram showing the construction process of an onshore pipeline. Please note, these images are based on a single pipeline. The Humber Low Carbon Pipelines project will involve two pipelines and will take a similar approach.

To build a pipeline, roads, railways and waterways will need to be crossed. We would use a range of techniques to cross these features to avoid disruption.

A long pit is dug on one side of the crossing with a shaft at the other side. A section of pipe is inserted with an auger – similar to the screw blade on a drill – inside it. This is pushed through to the other shaft, taking the pipe with it. Sections of pipe are welded together as they are pushed through. 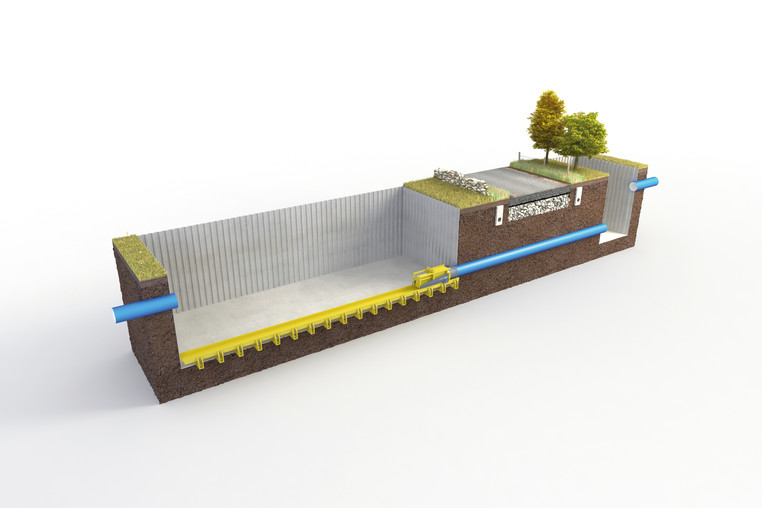 Shafts are dug at either side of the crossing. A cutting head digs a tunnel beneath it which is lined with concrete segments as it is dug. The pipe is then inserted in sections that are welded together as they are pushed through the tunnel. 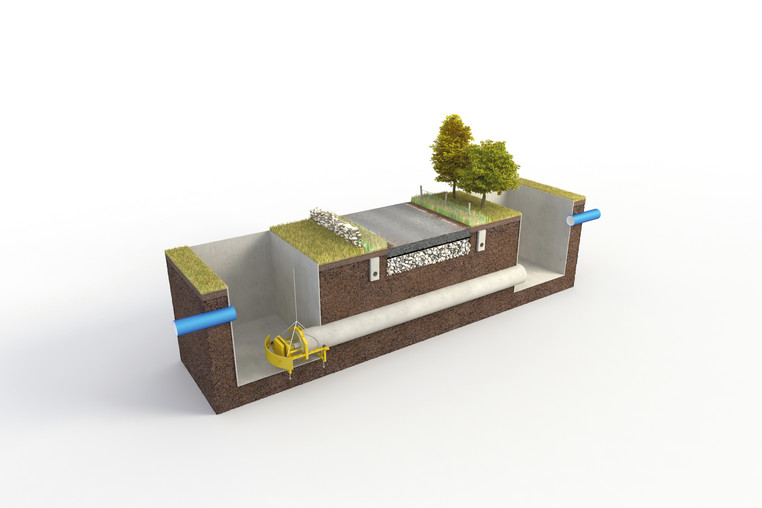 A special steerable drill is used to create an arced hole beneath the crossing, slightly bigger than the pipe. A winch then pulls the pipe through in a string – a long, welded section of pipe assembled on-site. 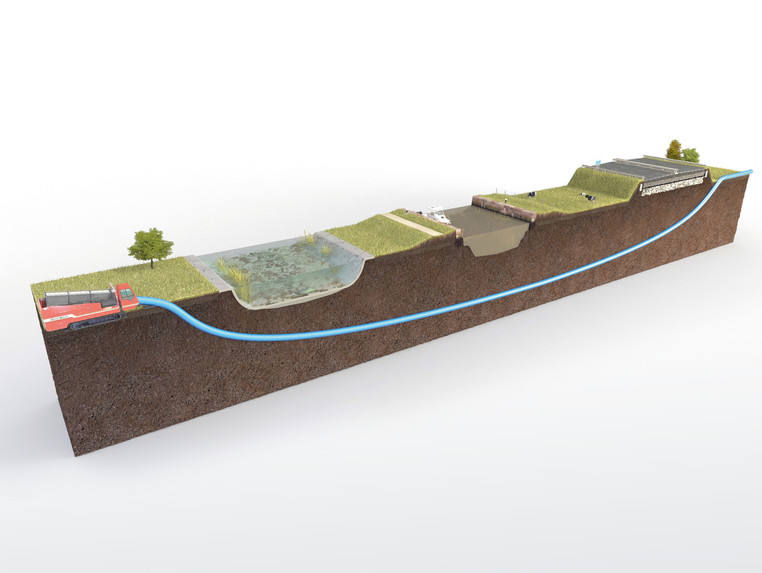 For narrow roads or tracks with a low volume of traffic, a trench is dug across the road, closing it for a few days. The pipe is lowered into the trench welded together in a string and the land is quickly reinstated.

*Please note, these images are based on a single pipeline. The Humber Low Carbon Pipelines project will involve two pipelines and will take a similar approach.

What happens at landfall and offshore?

The pipeline transporting captured carbon dioxide emissions would connect to a pump facility located near the coast. Here, the pressure of the carbon dioxide would be increased allowing for efficient transportation via a 103 km offshore sub-sea pipeline to the Endurance storage site beneath the North Sea for safe storage.

The storage site is known as the Endurance Store and is located approximately 63km from the nearest coastline, at a depth of approximately 1,020 metres below the seabed surface. The Store contains highly saline water.

The carbon dioxide will be injected into a Triassic-age geological feature, known as the Bunter Sandstone Formation. This means it was formed approximately 250 to 200 million years ago. 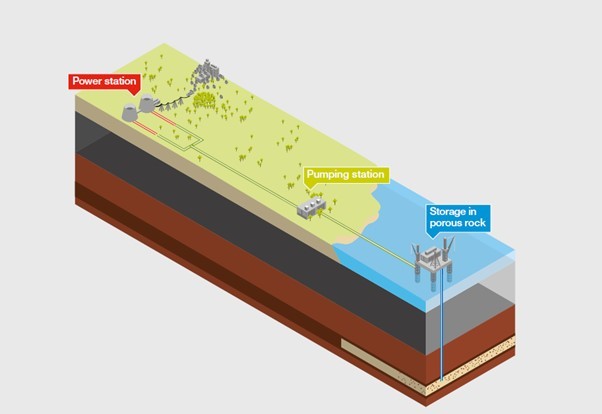 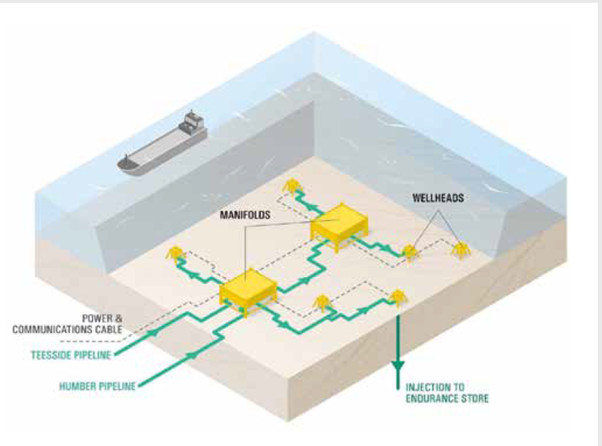 The plans for the sub-sea Transport and Storage facility and Northern Endurance Partnership (NEP) are being brought forward by BP as a separate project.

For more information on this, please contact BP at: www.netzeroteesside.co.uk/northern-endurance-partnership/