Hydrogen (H2) is a colourless and odourless, low-carbon gas which is found naturally in the atmosphere.

It can be used in power, transport and heating as an alternative to fossil fuels. For example, it has the potential to be a low carbon alternative to heat our homes and businesses and for use in industrial manufacturing where high temperatures are required, such as in steel and chemical production.

When we burn fossil fuels, we emit the greenhouse gas carbon dioxide (CO2). However, when we burn hydrogen the only waste product is water vapour. Therefore, production and supply of hydrogen could potentially play an important role in the UK achieving net zero in 2050.

What is carbon dioxide?

Carbon dioxide (CO2) is a natural gas that is produced by most living organisms, including humans and animals. It's produced when we breathe out and is needed by plants to aid their growth and development.

As well as being an integral part of everyday life, CO2 is a by-product of burning fossil fuels such as coal and gas for energy. This is one of the major contributors to global climate change.

In 2019, the UK committed to reaching net zero by 2050 and reducing our CO2 emissions will play a large role in achieving this target.

What is carbon capture, usage and storage (CCUS)?

Carbon capture, usage and storage (CCUS) refers to technology which captures harmful CO2 emissions and transports them to be stored permanently beneath the seabed in natural porous rock formations or depleted oil and gas fields or to be used in industrial or chemical processes for other products.

How does CCUS work? 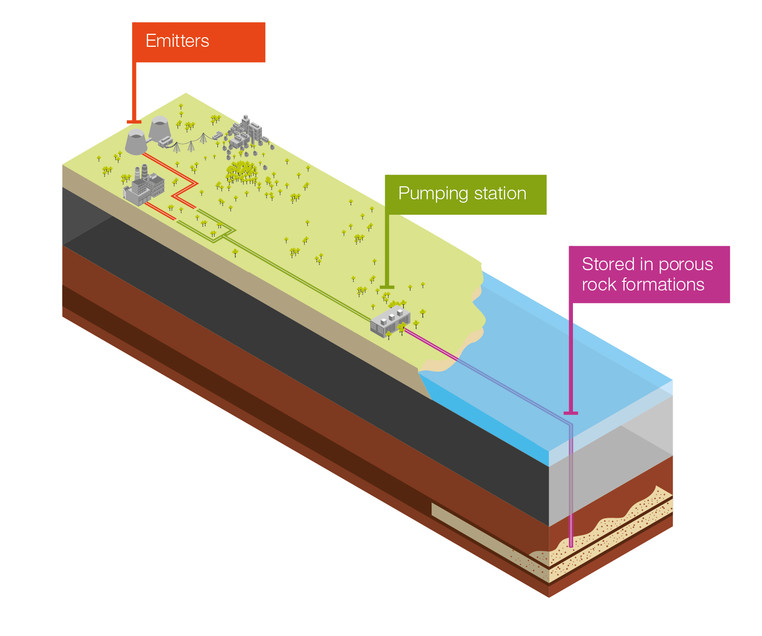 *Illustrative example – Not to scale

CCUS offers a means to retain the nation’s valued industrial powerhouses, while making a significant contribution to meeting the UK’s climate change targets.

CCUS systems have been in use for decades. According to the International Energy Agency, there are 21 CCUS facilities around the world. Some of these facilities have been in operation since the 1970s and 1980s. While the deployment of CCUS has largely been focused in the United States, the last decade has seen the emergence of new facilities in Europe, Australia, Brazil, Canada, China, Saudi Arabia and the United Arab Emirates.

The Humber Low Carbon Pipelines project intends to transport captured carbon emissions from energy-intensive industrial sites in the region to Endurance, an offshore storage location in the North Sea.