Electric dreams: The future for EVs

The UK Government’s announcement of a ban on petrol and diesel car sales from 2040 has thrown the debate on electric vehicles into even sharper focus. Market Insights Manager Russell Fowler examines the road ahead.

The momentum behind the shift towards electric vehicles (EVs) is now clearer than ever. The UK Government’s announcement to stop all sales of petrol and diesel cars by 2040 is the latest in a string of high-profile policy decisions in recent months.

France, of course, has already announced its own ban on petrol and diesel vehicles by 2040. Car manufacturer Volvo will produce only electric or hybrid vehicles from 2019. Meanwhile, BMW has announced that an electric version of the Mini will be built in the UK, with production starting in 2019.

These are seismic decisions, when you consider that at present there are only around 100,000 electric vehicles in the UK, which compares with a total car fleet of 31 million. The full details of the government’s announcement are still being studied, but the message is unavoidable – EVs are on the rise and it’s now a question of ‘when’ not ‘if’ the transition from the internal combustion engine will happen.

The future of EVs formed part of our analysis when we published the 2017 Future Energy Scenarios (FES) in mid-July. Of course it’s legitimate to ask whether that analysis has since been overtaken by the government announcement, but in fact high growth of EVs does fit within our scenario range.

So, what do our different scenarios say? In all scenarios except Steady State we see a dramatic rise in EVs, with sales being more than 90% of all cars by 2050. Two Degrees features the highest number of EVs, with 25 million pure EVs (PEVs), those that are 100% electric-powered, on our roads by 2050.

At the other end of the spectrum, Steady State sees the lowest growth, where both PEVs and Plug-in Hybrid EVs (PHEVs) each account for only 15% of car sales by 2050. The government’s announcement, if it becomes law, will clearly accelerate the move away from our historical reliance on petrol and diesel cars.

The potential effect on electricity demand

Our FES analysis paints a contrasting picture of future annual demand from EVs. Up to the late 2030s, the EVs in Two Degrees use the most power annually of all the scenarios. Beyond that point, the highest consumption is in Consumer Power, where consumers are driven by the desire for the latest technology. We estimate that by 2050, EVs in the Consumer Power scenario create an annual demand of 46TWh – or about 11% of 2050 national demand. 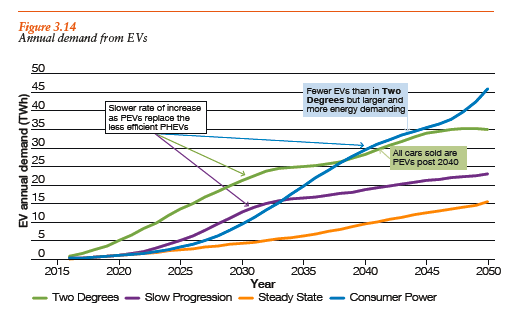 As the numbers of EVs increase, their peak time electricity demand is one of the challenges that will need to be met. For example, our Consumer Power scenario suggests that EVs will create an extra 18GW of demand by 2050 – that’s equivalent to an extra 30% on top of today’s peak demand.

You could argue that millions of motorists all needing to charge their electric vehicles would require lots of new power stations just to meet this surge in demand. But in fact this is where better consumer engagement and advances in technology both have a part to play.

Smart charging and switched on consumers

If every consumer chose to charge their vehicle after getting home from work at 5pm, as System Operator we would face runaway peak demand to manage. The consumer would still have the choice of when and how to charge. In reality, there is already diversity of demand. People arrive home at different times and have different routines, with only one in five expected to charge at peak times. It’s a little bit like every home having a kettle, but we don’t all make a cup of tea at the same time.

Solutions lie in a combination of incentives to encourage off-peak charging and smart systems that make the process of charging itself as simple and automated as possible Consumers would likely be just a couple of clicks on an app away from getting the whole thing done with the minimum of fuss.

Where and how we will charge in future

There is a lot of debate about different models for charging EVs in future. Half of households in Great Britain don’t have off road parking. This presents a very practical issue in terms of charging a vehicle at home!

In this year’s FES analysis, we have assumed that 7kW chargers become the standard in people’s homes, whereas in last year’s FES we focused on 3.5kW – this reflects the direction in which manufacturers are moving. We also assume that chargers will be smart-enabled – in other words they can talk to each other, helping consumers, if they would like to, and potential service providers manage demand in the most effective way.

The forecourt model is another option. We are all used to the concept of filling up the family car, even if the experience of negotiating the queue for the pumps is not always the most enjoyable.

Charging stations may well follow a similar set-up, although motorists would want to be able to charge their vehicles quickly and easily. Our recent thought piece explores the subject of mass fast charging of electric vehicles.

Meanwhile, several companies are investing in ‘flash battery’ technology that could allow a vehicle to run for a long distance from a five-minute charge. If successful, this super rapid EV charging could support the introduction of more forecourt charging sites. From a system operation perspective these super rapid charging sites would likely need some form of network reinforcement.

How quickly will technology advance?

If we take a step back for a moment and consider the speed at which the EV market is now developing, it’s quite telling. Who knows how much battery technology might have progressed by 2040? Certainly, motorists will expect electric vehicles to be capable of broadly the same range and performance as their existing vehicle as technology matures.

And about rural areas, which are currently under-served by rapid charging points? Clearly, there is work to do on developing more comprehensive charging infrastructure to meet the needs of a larger electric fleet.

So, as we digest the implications of the government’s announcement on a 2040 cut-off point for sales of petrol and diesel vehicles, there are many unanswered questions. We do, however, know the answer to one of them: “Are electric vehicles here to stay?” It’s a simple “yes”.

In July nearly 400 stakeholders from across the energy industry gathered in London to debate National Grid’s 2017 Future Energy Scenarios. Learn what was revealed at our 2017 day of insights.