Paving the way for women in engineering

When I first joined Grain LNG as its first female apprentice, I didn’t have any engineering experience, so there were a lot of different challenges to tackle. But it’s been such a valuable experience, providing me with a great foundation to build on that’s helping me forge ahead in a career that I enjoy.

As a hands-on person, I like to keep busy and have a variety of tasks to complete. I felt that an apprenticeship would be right for me, and the Grain LNG placement looked so different to anything else I saw. I just knew I had to go for it.

It was all out of my comfort zone at first – being the only woman on my apprenticeship course, adjusting to a different way of life and having so much to learn about the industry and how the plant works. But it was an enjoyable challenge. Before I started I didn’t know that I would be the only woman, but when I got into the placement it didn’t make any difference at all to me.

If you’re interested in an apprenticeship, give it a go.

I could easily have been put off my course as everything was so new to me, but it’s the best thing that could have happened and I’m now seeing the rewards that come with embracing the challenge. Earning while you learn is also a great way to start your career, while offering a valuable mix of academic skills and hands-on experience.

It’s really rewarding that I can tell my new apprentice I started out where she is and show her a career path that you can have as a woman in engineering.

For the past nine years, I’ve been moving up the ranks here at Grain LNG and I have my own team to look after now. It’s a good balance of time spent in the office and time out onsite with the team – we also have a new female apprentice starting, which I’m really looking forward to.

Last year I was voted Women in National Grid’s (WiNG) Female Engineer of the Year and I’m so proud of that. I want to help others get to that point too. It’s really rewarding that I can tell my new apprentice I started out where she is and show her a career path that you can have as a woman in engineering.

I wasn’t expecting the award at all – I didn’t even know there were awards taking place. I went to a talk at the company’s Warwick site and there happened to be a presentation ceremony at the end. There was absolutely no chance to prepare and I was completely surprised when they called my name. Later, I found out that my boss had nominated me and I was really touched by some of the things he wrote in the entry – really positive things about how I’d applied myself during my apprenticeship.

He highlighted the detail of my college log book as something that’s still used as an example of best practice. He also described me as a natural leader – someone who challenges, strives to improve, and is respected by their peers in a very male dominated environment.

That endorsement means a lot to me and, equally, I feel incredibly appreciated by my team and hope that my other female engineering colleagues feel just as valued. I believe National Grid is working very hard to encourage more women into STEM fields, and I hope the numbers keep rising. 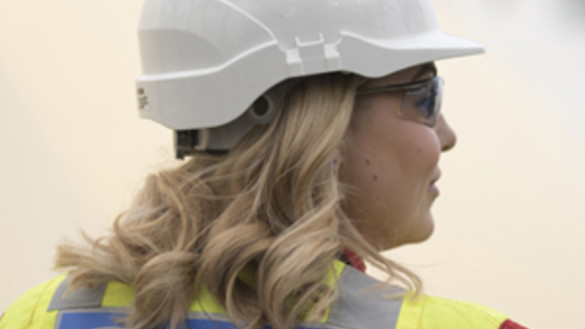 Chelsea Malcolm: Paving the way for women in engineering