Ian Plowright, Business Operations and Maintenance Manager at Sellindge Converter Station, learned what it meant to help people as a young child – and he’s been giving back to his community and good causes ever since. He shares his story of charity marathons, the joy of volunteering and why it’s important we get our priorities right in life.

I’ve worked for National Grid for more than 40 years. I try to be positive, friendly and helpful and always find the best in people. Because that makes life better for everyone.

My childhood played a big part in making me the man I am. My grandmother was always very generous. After the second world war, she built houses on her own land for all her family. My Dad was a big influence too. Whenever there was a job to do on the allotment, or even laying a concrete driveway, he’d always get me involved. When you do that as a child, you quickly realise what it means to help people.

In the past few years, my wife Catherine and I have been going a long way to help people with breast cancer – 1,000 miles in fact!

It all started when Catherine had a skiing accident and ruptured a cruciate ligament in her knee. During her rehabilitation, we were walking in the Lake District and did an arduous climb to see how her leg would cope without a brace.

Doing a challenging walk without any problems helped get her confidence back. The next thing I knew, she was suggesting we do a challenge called the MoonWalk, which supports breast cancer charity Walk the Walk. It was a particularly pertinent cause for us, after we found out our very good friend John had breast cancer a few years ago, but he is not in remission just yet. I was a little concerned at first about Catherine taking on such a distance, but she persuaded me it would be fine.

So we signed up for a MoonWalk event in Iceland – yes, Iceland – and raised £2,000 in sponsorship. It was a fantastic experience, but we were quite naïve about our nutrition and fluid intake and Catherine collapsed at the end of the race. Fortunately, it was nothing serious and, after meeting lots of friendly people during the walk, we really had ‘caught the bug’.

What’s the point of watching junk on the television when you could get up, get outside and do something useful instead?

This year, we stepped things up a gear and took on Walk the Walk’s Three-Land Challenge. This involves doing three marathon MoonWalks in two months – in London, Edinburgh and Iceland. It was physically demanding, but an incredible experience and we raised another £3,000. Across all our training and the three marathons we’ve done this year, we’ve walked more than 1,000 miles, which is actually the distance between London and Iceland!

One of the lessons I’ve taken from these events is there are an awful lot more nice, generous people in the world than bad ones. Around 15,000 people every year do the London MoonWalk alone. It’s great for the soul to spend time with such positive, like-minded people. Being helpful and volunteering your time can be extremely rewarding. Throughout my adult life, I’ve volunteered with the local Scout group and I always get my hands dirty if a neighbour needs help. It’s just the right thing to do.

After all, what’s the point of watching junk on the television when you could get up, get outside and do something useful instead? With the Scouts, you know you’re improving the lives and futures of young people, so I don’t understand how anyone could say no.

It’s important we get our priorities right in life. I have an ethic that says I look after my family first, my job second and everyone else third. It’s a system that seems to have worked! 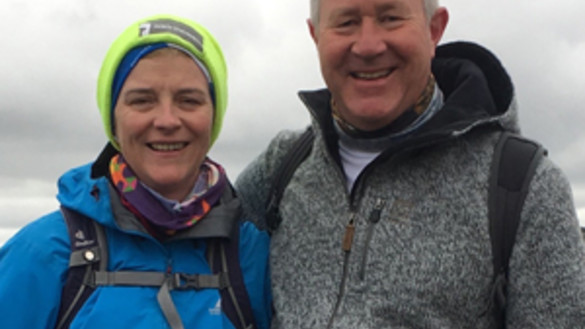