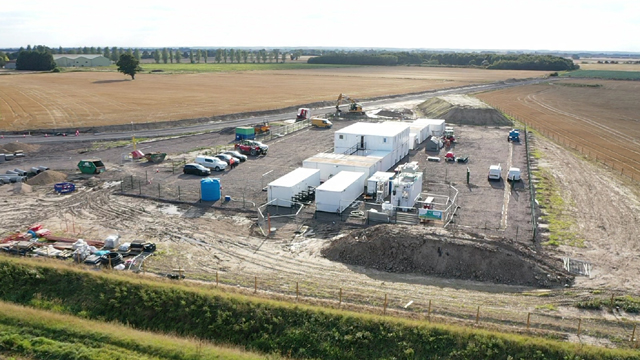 Helping to demonstrate how hydrogen can be the heating fuel of the future, our Viking Link project in Lincolnshire has become the first construction site in the world to use hydrogen cells for all its heat and power.

Our Viking Link project is leading the charge to show how hydrogen could become the heating fuel of the future. At the project’s site in Lincolnshire, our partner Siemens Energy has, with GeoPura, installed a hydrogen fuel-cell heating and power system; a world first of this type at a construction site.

Viking Link is a joint venture between National Grid Ventures and the Danish electricity system owner and operator, Energinet, to build a high-voltage electricity interconnector. The longest in the world when completed, it will stretch 765km between Bicker Fen in Lincolnshire and Revsing, Denmark, so that clean energy can be shared.

During the initial build of the interconnector, an ‘off grid’ solution to powering the site was needed, since there won’t be a connection to the national gas and electricity system for at least six to eight months. The way to provide heat and lighting would normally be to install diesel generators, but instead Viking Link’s team has opted for the cleaner alternative of hydrogen fuel cells. These will provide enough heat and power for all of the construction village’s 20 cabins.

The cabins, which contain offices and meeting space, will be used by Siemens Energy employees and contractors while work is carried out on an access road and then on the converter station for the new interconnector later this year.

It’s not just heating and lighting that the system will power – there will also be six electric vehicle charging points, so workers can ‘drive cleaner’ too.

From festival to building site

The fuel cell system was piloted by Siemens Energy at the Goodwood Festival of Speed in 2019 and has since been further developed by the company’s partner, GeoPura. It now uses the waste heat that is normally lost from the fuel cell’s cooling system. This waste heat is passed through a heat exchanger to warm up water, which is then piped through to heat two drying rooms for the site workers’ personal protective equipment (PPE).

The fuel cell system incorporates 216kWh of battery storage, which is used to smooth peaks in power demand and improve efficiency. This battery also means that, if the hydrogen supply is interrupted, the site can still have power for several hours.

Initially, the hydrogen supplied for the fuel-cell system will come from conventional sources, but this will move over to green hydrogen once a suitable supply has been confirmed. Projects like this will play a vital role in growing the green hydrogen market in the UK. By using green hydrogen, a tonne of carbon dioxide (CO2) will be saved each week – the equivalent of taking 20 cars off the road.

Another environmental benefit is that the only by-product of using a fuel cell to generate power on site from hydrogen is water. In contrast to diesel generators – the usual way of providing off-grid power to construction sites – this will eliminate Nitrogen Oxides and particulate emissions.

Energy Minister Kwasi Kwarteng said about the project: “Hydrogen has a key role to play in the UK’s journey to net zero carbon emissions and I’m delighted to see this innovative off-grid power source being installed at Viking Link. It’s steps such as this that will be vital in enabling a hydrogen economy to flourish in the UK, as we build back better with new low-carbon jobs.”

Find out more about hydrogen