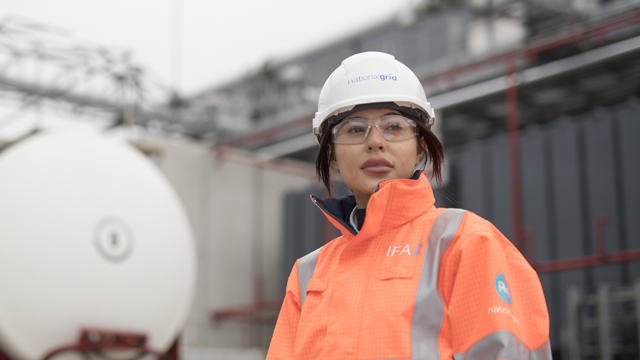 IFA2 is the latest addition to our portfolio of interconnectors. These giant undersea cables allow us to share clean energy with our European neighbours. Find out more about how IFA2 is playing a vital role in helping us to decarbonise the energy system.

Interconnexion France-Angleterre 2 (IFA2) is Britain’s latest interconnector, running for 149 miles under the sea and connecting Fareham in Hampshire and Normandy in France. Interconnectors are high-voltage electricity cables that allow us to share surplus clean energy.

This new interconnector is expected to deliver 1.2% of Britain’s electricity needs – enough to power a million homes with zero carbon energy. By the end of its first year in operation, this interconnector will have helped to prevent 1.2 million tonnes of harmful CO2 emissions – that’s equivalent to planting 50 million trees.

IFA2 is our second link to France, following in the footsteps of IFA, which runs from Kent to Calais and was our first ever interconnector, launched in 1986. The new 1,000MW high-voltage direct current (HVDC) cable is the result of a shared £700m investment with our French partners, RTE. Despite being completed during the COVID-19 pandemic, it has remained on time and in budget.

By adding to our family of interconnectors, IFA2 will play a part in helping the UK to transition to clean energy resources; and collectively they will enable us to benefit from clean nuclear power, hydropower and wind power. This means that when the wind doesn’t blow, or the sun doesn’t shine here, we can import zero-carbon energy from our neighbours.

The UK is committed to reaching net zero by 2050 and decarbonising the energy system will play a key part in helping us reach that target. There’s already been significant progress – since 1990, emissions reductions in the power sector have accounted for around half of the UK’s total emissions reduction. And 2019 was the first year that saw zero carbon power outstrip fossil fuels for a full 12 months since the Industrial Revolution.

But, to reach net zero, more needs to be done and interconnectors play a critical role in helping to cut carbon emissions. Our three existing interconnectors – IFA, Nemo Link and BritNed – already power the equivalent of 5 million homes with energy and this will increase to 8 million by 2024, when we plan to have six interconnectors in operation.

We anticipate that importing cleaner energy via our interconnectors will help the UK avoid 100 million tonnes of CO2 emissions entering the atmosphere between now and 2030, which is equivalent to taking 2 million cars off the road. You can see the real-time impact of green energy exchange by viewing our Power of Now carbon dashboard, which provides by-the-hour information on the CO2 emissions interconnectors are reducing.

As well as helping us cut harmful emissions by allowing us to import clean power, interconnectors like IFA2 also enable us to sell excess renewable energy; so when the wind blows here, we can export green power to Europe.

Completing IFA2 was a huge feat of engineering, which required the cable to be laid beneath the English Channel, the busiest shipping lane in the world. The project threw up some fascinating finds, including a 40- to 45-million-year-old fossils and the wreck of a WW2 Barracuda bomber. The historic plane is the most complete example in existence, and after being carefully raised from the seabed, it was sent to the Fleet Air Arm, which is working to preserve the salvaged aircraft.