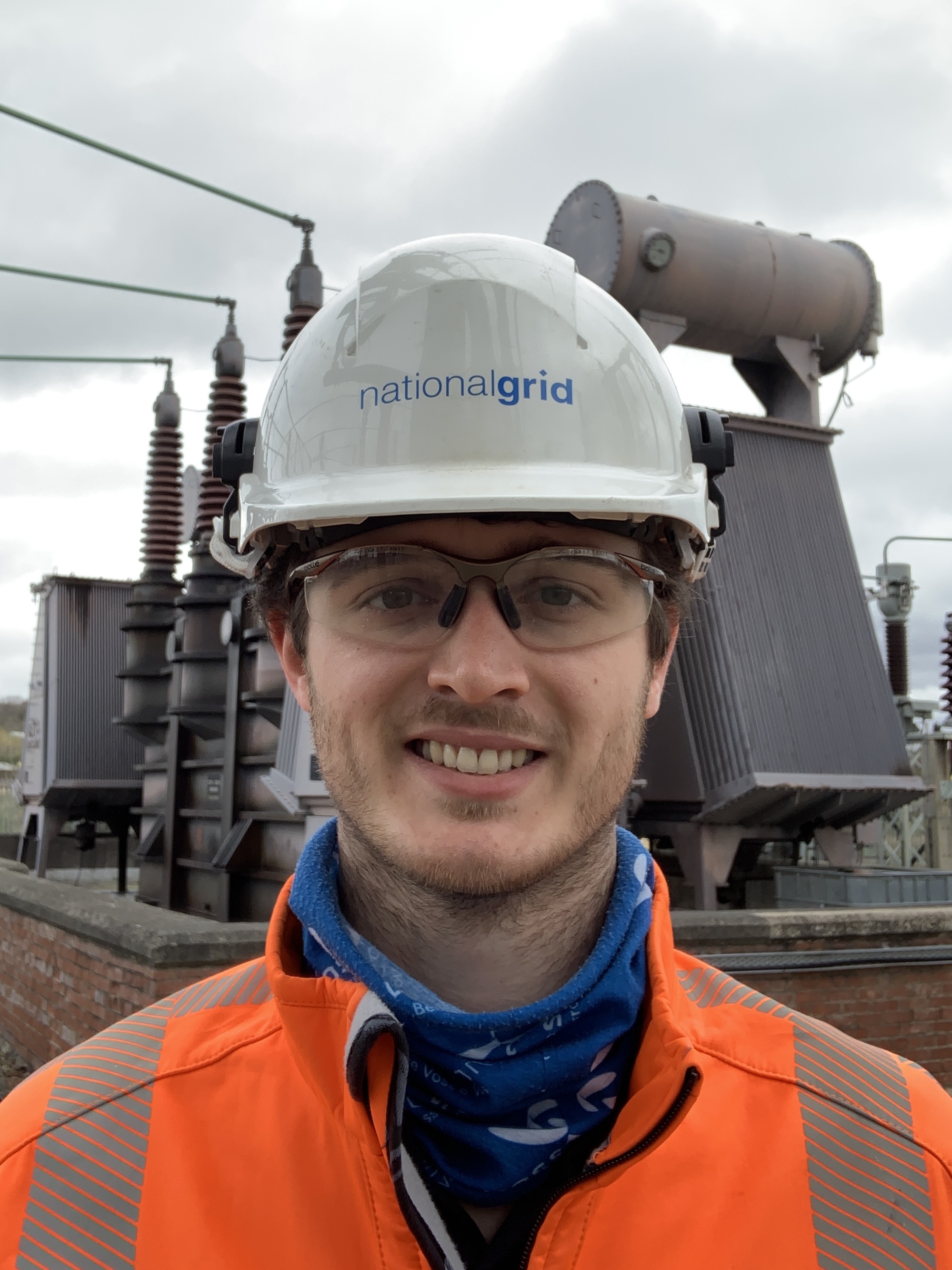 Green collar jobs: Joseph Harvey – the apprentice who switched from marine to green

Joseph Harvey's interest in net zero was sparked during his higher apprenticeship. Here he tells us about his ‘green collar job’, how he’s representing National Grid as a future leader on sustainability and his literally cool outdoors hobby.

In the latest of our Green collar jobs series, we talk to Joseph Harvey, a Trainee Substation Engineer in the UK's Borders team, which covers the region from Carlisle to Newcastle. As well as combining his ‘day job’ and degree level studies, Joseph is also representing National Grid on EY’s Future Leaders Board for their Climate Business Forum – a group of young professionals addressing long-term approaches to ‘prosperous decarbonisation’.

My role involves working on substation equipment, ensuring the safety of staff, contractors and the public around these sites, while delivering our projects to the highest standards.

My job contributes to net zero because, ultimately, substations facilitate the connection of green energy to the network. Many sources of renewable energy are variable in nature, meaning that when the wind stops blowing so does generation. Inconsistent supply leads to variation in voltage levels and power flow. Substations help smooth these peaks and troughs through the application of our compensation equipment, facilitating green energy’s flow around the network and ultimately to homes and businesses.

Joseph explains the role of substations: “They provide a connection point for generators, overhead lines supported by towers (commonly known as pylons) and to the distributors that supply energy to homes and businesses. They have equipment capable of stepping voltage up or down, disconnecting circuits and protecting the network to ensure safe and reliable operation.”

From marine to green

I’ve ‘earned and learned’ since leaving secondary school. It’s not easy to come home from a long day at work and, rather than flopping on the sofa, forcing yourself to pick up a textbook, but I know I‘ll look back on the sacrifices and feel it’s been the best thing I’ve ever done.

I completed my first apprenticeship as a marine electronics technician. I was responsible for installing, repairing and commissioning electronic equipment used for commercial vessels. I worked on- and off-shore, travelling the country while studying for a Level 3 Diploma and then a Level 4 HNC in electrical and electronic engineering part-time.

I felt my opportunities were limited in that role though and wanted a new challenge. I studied alongside a National Grid apprentice (little did I know he’d soon be a colleague) at college during my HNC, who spoke incredibly highly of the company. Once I read up and saw the training scheme, I knew in a heartbeat it was for me and I ended up joining their Substation Higher Apprenticeship.

I became more and more interested in clean energy during the training programme element of my foundation degree in engineering – part of the apprenticeship programme. At this stage, I completed a project on the installation of electric vehicle charge points within our substations and I began to study carbon neutral operations and what the energy industry is doing to reach this goal. My love for new technology and passion for the outdoors were combined at this point, and ever since I’ve been focused on what we can do as an industry to preserve the environment and minimise our carbon footprint, while meeting the demands of our stakeholders.

Busy beyond the day job

I’ve since taken on many voluntary roles and projects around this theme. I recently completed my university studies on sustainable and renewable technologies, developing a project that evaluated and suggested improvements for substation energy management systems, seeking to reduce carbon emissions but still being financially viable.

I’m also the National Grid Future Business Leader on EY’s Climate Change Business Forum, working with a team of passionate individuals to develop environmental commitments for some of the biggest companies in the UK, supported by their leaders and alongside the UK Government.

Proud to be on board for COP26

Being selected for the EY group was a massive moment for me. As someone whose experience in sustainability and green issues mainly comes from self-study, applying for the role I knew I was an underdog and was lost for words when I was offered a place. The opportunity to influence environmental policies that will be adopted by industry giants, before what is considered to be the make or break point of a carbon neutral future – COP26 – is amazing.

Hopes for the future

As someone driven by people and projects, once I’ve refined my technical skills I’d like to move towards management. I’d like to become an industry leader someday, promoting sustainable growth while tackling operational problems using my first-hand experience in the field.

More generally for the world, not all countries have acknowledged their commitment to sustainability, and without us all moving in the same direction, we’ll struggle to see real change and might never succeed. COP26 could be the turning point for this, with the movement towards the 2050 carbon neutral target becoming a common goal for us all.

Instilling eco-awareness in a younger generation

“A key lesson I try to teach is how small we are compared to the wider world and how we must respect and cherish the environment. I hope this transfer of knowledge will inspire some future leaders and activists.”

I’ve been in the Scouting movement since I was six, so at 23 I’ve been in the organisation almost three-quarters of my life. I’m now the leader for my original group, which gives me the opportunity to share my passion for the outdoors with younger people. A key lesson I try to teach is how small we are compared to the wider world and how we must respect and cherish our environment. I hope this transfer of knowledge will inspire some future leaders and activists.

A cooler way to camp (literally)

As a lover of all things outdoors, I decided to go one step further with camping and switch from tents to hammocks. I’ve been hammocking for six years now all over the UK, with a recent winter trip taking me to Galloway, in Scotland, where temperatures dropped to -5°C – not for the faint hearted!

My eco hero is…

Steve Backshaw. As an adventurer and conservationist, he’s dedicated his life to exploring the natural world and educating young people about the importance of sustaining it. Education is key to preparing young people for the future challenges we face in the fight against pollution and climate change, and what better way than showing them the beauty they can seek to preserve.

Can we achieve carbon-neutral construction by 2026?

The path to net zero isn’t just about the tools we use, but also the infrastructure we create to get us there. Our Net Zero Construction project is helping us to deliver our vision of a clean energy future, with a commitment to being fully net zero across all new construction projects by 2025/26.

The East Coast Cluster would capture, transport and store CO2 emissions across the Humber and Teesside regions – which account for nearly 50% of all UK industrial cluster emissions – and deliver an average of 25,000 jobs per year in the area up to 2050.

Transport makes up 23% of energy-related carbon emissions globally and businesses have a critical role to play in leading by example and encouraging an uptake of EVs within their own fleet. We’re doing this by joining the EV100 initiative.