Life as a lineworker

Lineworkers are the superheroes who keep the power flowing no matter how tough the conditions. We explore the crucial role of a lineworker and how in this job safety must always come first. 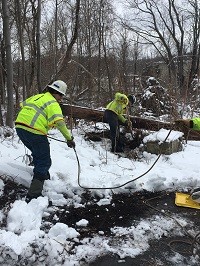 On a day after heavy rain, getting the bucket truck out across rain sodden land is problematic. Tyres whirr in the mud and the air fills with the smell of diesel as the wheels refuse to grind across the field towards the electricity wires that need attention.

There’s nothing else for it. A team of highly skilled National Grid lineworkers need to fix the fault to keep energy flowing, regardless of whether their vehicle can reach it or not.

The engineers stare up at the grey sky to check whether the rain will start again, and then, confident the threatening clouds are drifting south, pull out their climbing boots. There’s only one way up that pole, and that’s to fix themselves in a secure harness, grab their tools, and hoist themselves up. As well as their belt, hooks and pliers, they make sure their pouches have everything they’ll need once they’re airborne: a cable skinning knife, a ruler and a screwdriver. Then it’s time to get things fixed.

Being a lineworker is a tough but crucial gig. When former lineworker John Doherty started out as an apprentice aged 19, he realised that these guys were the ones with the capes. “I saw that these were the people running around during storms putting the lights on, and they’re making people happy. They’re our saviours during ice storms and other natural disasters, so I got some training sessions in and started there.”

“I saw that these were the people running around during storms putting the lights on... They’re our saviours during ice storms and other natural disasters.”

Ensuring the safety of our lineworkers

But how does National Grid guarantee safety for its lineworkers? Tim Horan is the Group Director of Global Safety, Health and the Environment at National Grid, explains: “These are individuals who work in our electric and transmission business. They’re hugely experienced in their trade. It’s not a walk in the park. For line workers to work at the company, they must go through testing and training every year.”

There are so many risks associated with being a lineman, Horan says. It goes without saying that the engineers are very high. Main risks include losing footing, being around live electricity, and falling. “This is why it’s so important to have such strict safety procedures in place.”

A head for heights and a can-do attitude are vital characteristics of a successful lineworker, but the reward is knowing that you’re keeping the lights on and the power flowing into homes and businesses for miles around.

Interested? Search for careers as a lineworker at National Grid.