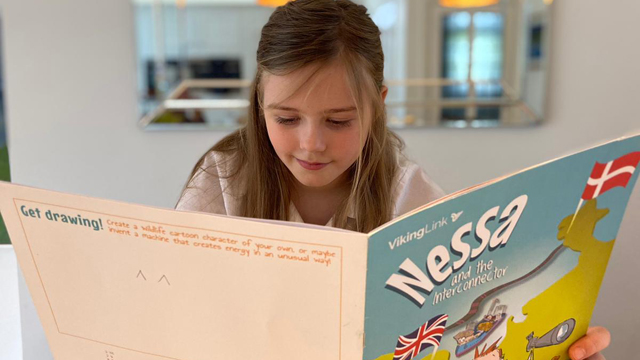 The story of electricity, interconnectors and a little girl called Nessa

How to make electricity more exciting for schoolchildren? Introduce 10-year-old Nessa and her quest to discover where electricity comes from.

Nessa is a character in a children’s book, the first of its kind created by the Viking Link team at National Grid Ventures.

The start of the story

Nessa and the Interconnector is the tale of a 10-year-old schoolgirl, who sets off on a journey to discover more about the new Viking Link interconnector and the role it will play in transporting renewable energy.

Construction on the vast electrical cable began in March 2020. Once complete, Viking Link will stretch for 475 miles (765 km) under land and sea between Bicker Fen in Lincolnshire and Revsing in Denmark; enabling the sharing of excess wind power between the two countries.

The workbook is part of the Viking project’s Community Contribution Programme and features real-life team members. 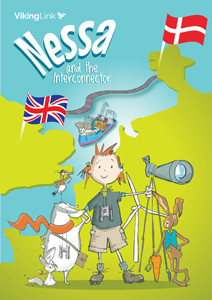 Nessa and the Interconnector includes fun illustrations, fascinating facts and educational activities around green energy. It’s aimed at pupils aged seven to 11 and supports the science national curriculum for year 4. One thousand copies are being given to schools along the cable route, to inspire the next generation of engineers.

The project team worked with former headteacher and author David Evans to develop and write the story, and create the character of Nessa.

He’ll be telling pupils more about the story in an introductory video, which will be delivered alongside the workbooks. He said: “I’m thrilled to have been involved in this workbook and to have the opportunity to teach pupils about such an exciting project happening in their area.”

Viking Link Project Director Mike Elmer said: “We are delighted to be working with local pupils to teach them about our project and the vital role it will play in bringing more green energy into the UK. Once it’s complete, the link will be the longest land and subsea interconnector in the world – providing enough energy to power 1.4 million UK homes.

“The book is fantastic and is just one of the ways we will be working with local schools to inspire them into careers in engineering.”

A downloadable version is also available for all pupils on our website.

As well as the books, the Viking Link team has also donated much needed stationery and PPE to the schools, to help with children’s return to classroom learning.

Viking Link is a joint venture between National Grid and Danish system operator Energinet, and will be the UK’s sixth interconnector. National Grid currently operates two links to France, one to Belgium and one to the Netherlands, with a new interconnector to Norway due to become operational later this year.