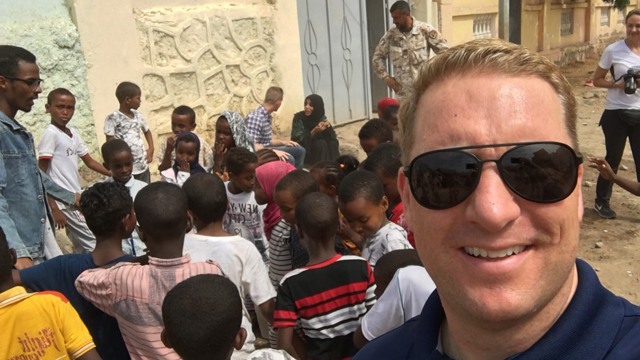 A second career for army veteran

Major Jason Uhlig, 40, left active military service in 2012 and has since worked for National Grid. He now works as a Lead Programme Manager in Electric Emergency Planning in Syracuse, New York, planning for and coordinating storm restoration responses. He remains a member of the Army Reserve, serving overseas when called upon and training at weekends.

Every year on National Veterans’ Day on 11 November, Jason, his wife and two children place flags on fellow service members’ graves alongside the Syracuse Valley America Legion. “Then we have a family dinner and share stories of my two grandfathers’ service in World War Two,” says Jason. “I want my children to know what service and sacrifice means to our freedom as Americans

“I believe it’s important to keep it at the forefront of the American consciousness that our freedom has come at great cost and unfathomable suffering by the families of those who have made that ultimate sacrifice for what they believe in – the American way.”

Jason knows first-hand what sacrifice means for his country. “I missed my grandfather’s passing and I made it home two days before my son’s birth, but then I was deployed for the first five months of his life,” he says. “I’ve missed my wife’s, daughter’s and other close family members’ birthdays and so many family weddings too.”

And he mourns people close to him. “I’ve had many brave fellow service members injured in the line of duty. I lost a very close friend to Post Traumatic Stress Disorder suicide following our combat tour in Afghanistan and another friend from service in Iraq.”

Jason joined the armed forces in 2003, in the aftermath of the 9/11 attacks. “I felt a desire to serve my country and I was raised in a military family – my father served in the Marine Corps and both my grandfathers in the Second World War.

“As a young man I had the desire to test my mettle. I enjoy challenges, travelling to foreign countries, creating lifelong friendships and the brotherhood that military service creates was also very exciting to me – and continues to be.” 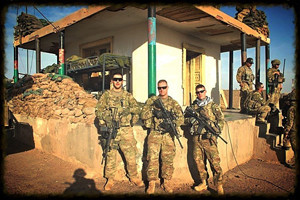 During his 17-year military career, Jason has served in South Korea, in Afghanistan in Operation Enduring Freedom and in the Army Reserve in Africa alongside Kyle Metzler, who also works for the company and is in the National Guard.

When Jason left active duty eight years ago, he transferred into the Army Reserve, with regular weekend training, and also started work as a supervisor in Electric Operations.

Jason admits moving from the military to civilian life came with challenges and some stress. He’s grateful for the support and encouragement he received from the 400-strong Veterans Employee Resource Group (VERG) at National Grid.

“As service members, we have been trained and taught techniques to adapt and overcome many of life’s challenges, but the transition is not without its hardships,” he says. “Having a Veteran support organisation like National Grid’s VERG helps bridge the gaps between military and civilian life circumstances.”

We know recruiting veterans is the right thing to do, but it’s also a smart business decision; for our company, our industry and our nation. Military service has given veterans the training, experience, discipline and leadership skills we need to help us succeed as a skilled energy workforce. We currently employ over 700 veterans in the US.

Jason was one such veteran recruit. “I attended multiple Syracuse University Veterans job fairs and, through the talents of the VERG organization, I was identified as meeting the criteria for the Electric Operations Supervisor Enablement Programme. I saw different opportunities for leadership development within National Grid.” 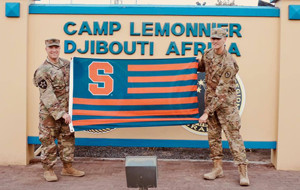 He says many of his skills have proved transferable to civilian success. “The US Military dedicates time to leadership and teamwork development, selfless service and dedication to the mission mindsets. Planning for Electric Operations requires the same skillset and the role continually tests resolve in the face of unknown natural and man-made contingencies. This also means my mind stays sharp for when I’m called back into active military service.”

Jason says the positives of civilian life are being fully involved in family life and rediscovering the comfort of sleeping in his own bed.

But, as for all Army Reserves and National Guard members employed by the company, Jason’s current challenge is juggling work with training and deployments.

“VERG’s leadership and membership have been a stabilising factor for me and I’ve been fortunate to be fully supported within the different Electric Operations departments,” he says. “My leadership has taken time to learn who I am and what service obligations I must carry out when I’m called on overseas deployments.

National Grid also works with veterans through the US Troops to Energy Jobs programme. This is designed to help veterans make the transition from military service to a second career working within the energy industry.

Read more about how our colleagues step up and serve in our Keeping it in the family: meet our volunteer fire fighters story.