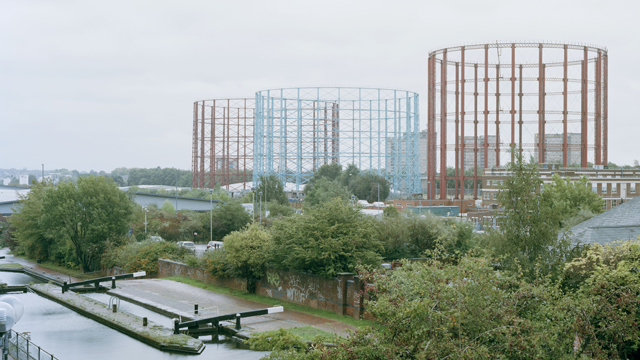 Who painted the gasholders?

Work to dismantle three gasholders at Windsor Street in Birmingham gets underway next week and National Grid is asking for help to solve the mystery of how the gasholders came to be painted in the Aston Villa Football Club colours.

National Grid is dismantling the gasholders as they are no longer used to store gas because improvements to the national gas network means gas can now be stored in the pipe system underground.

Gas production started at the Windsor Street Gasworks in the 1840s and the gasholders at the site date from 1885, where they have remained a feature of the Aston skyline ever since. They are painted in the claret and blue colours of Aston Villa Football Club and are the last remaining gasholders in Birmingham.

Sarah Rea, Land Regeneration Manager at National Grid, said: “We believe the gasholders were painted in the club colours in the 1980s and there are lots of theories about how this came about, but it would be great if we could solve the mystery once and for all. We recognise that these gasholders have been a part of the skyline in the area for many years and, as well as trying to solve the painting mystery, we’ll be making sure we undertake detailed heritage recording at the site as the work progresses. We’ve set up a website for the project where people can find out more about the history of Windsor Street and also download a booklet about the history of the gas industry in Birmingham.”

If anyone can solve the mystery, they can get in touch with National Grid on 0800 8199 071, email [email protected] or visit www.nationalgrid.com/windsorstreet

The project team is also calling for anyone who has a story to tell about life and work in the gas industry at Windsor Street to get in touch. Sarah explained: “National Grid is creating the world’s largest digital history archive of the gas industry, capturing people’s experiences through video and audio recordings. The completed podcasts and videos supplement the physical archives held at the National Gas Archive in Warrington and the National Gas Museum in Leicester.  We’ll also donate copies to national and local museums, archives and libraries.”

Work at the site is expected to be completed by spring next year.

You can watch a short film about the project here: