A woman who helped to put the first man on the moon and her parents’ love for nature inspired Project Engineer Lara Chilcott to study science. This early passion has now turned into a career where she can use her skills to protect the planet and play a vital role in our transition to a sustainable society.

I’ve always loved science. When I was a little girl, my mum and dad used to buy me home science kits – the kind where you put bugs into slides and look at them under a microscope. My parents were very outdoorsy and I often went walking with them. My dad would talk to me about nature, ecology and the environment. Science is just something that’s been part of my life from a very young age.

I went to a standard comprehensive school in South Wales, but never felt like science wasn’t something I shouldn’t, or couldn’t, do because I was a girl. That said, I did follow the same route as a lot of girls at school.

I liked science and took biology and chemistry at A Level, but I didn’t feel encouraged to take physics. In my year, there were no girls in the A Level physics class. It was frustrating that I didn’t study physics, as the degree I decided to pursue, and ended up studying at the University of Bristol, was heavily physics focused. The first year was a steep learning curve but I’m so glad that it didn’t put me off applying, as I loved my course and have absolutely no regrets on my choice to study Environmental Geoscience.

I chose Environmental Geoscience because of my passion and interest in the natural world and climate change. The course was a good mix of men and women and at university I never felt out of place as a woman studying science.

My inspiration (apart from my parents) was Katherine Johnson. She was an African American mathematician who helped NASA put a man on the moon. When she first applied for the job at NASA she was turned down, but she didn’t give up. She tried again the next year and was accepted. She always demanded a seat at the table in meetings when, at that time, it was not the norm for women to join in, let alone speak up. I admire her perseverance, which saw her promoted from a human ‘computer’ to part of the NASA space projects team.

I wasn’t nearly as focused about what I wanted to do. As a little girl, I wanted to be a teacher and while I was doing my degree I thought about joining the Met Office to work on weather forecasting. I didn’t know that much about careers in science. But finding a job after a science degree wasn’t difficult. I graduated in July and by September I was working full time at a consultancy firm in London.

That’s a real benefit of studying science – there are lots of routes open to you and a high demand for your skills. When you look at the learning principles of science – problem solving, creativity and strategic thinking – they’re useful for any industry. This is particularly true when so many industries are having to do things differently to be more sustainable and reduce our impact on the planet. This shift makes science skills even more critical to so many roles.

The work on my graduate scheme was very science based and involved a lot of site investigation and analytical work. Then I came on secondment to National Grid, where I was able to gain experience in project and contract management from the client side. I ended up really enjoying the work and, in the second year of my scheme, I applied for a full-time job. Although it was a very different to what I was doing at the time – and a big step up for me, because my degree was so broad – the team had the confidence that I could fulfil the role and learn on the job. 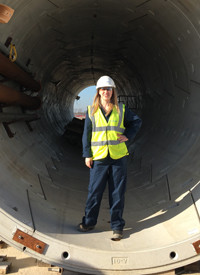 Since then I have moved on into my current job as a Project Engineer. I’m now responsible for the delivery of electricity construction projects in London, making sure work is completed on time and within budget.

Project engineering requires knowledge across a wide range of disciplines, predominantly project management, contracts, finance, engineering, safety and sustainability. I believe my environmental science background enabled me to secure the role I’m in today, as protecting the environment and sustainability is a critical element to the successful delivery of National Grid projects. At just 27, I’ve already had a varied career thanks to the skills I learned during my degree.

I’ve always felt as if the world of science was wide open to me and it’s also opened a lot of doors for me. If I had a daughter, I would like to give her the same curiosity about the world around her that my parents gave me. That’s what I love most about science.