To keep global warming to no more than 1.5°C above preindustrial levels, avert the worst impacts of climate change and preserve a liveable planet, the world needs to halve emissions over the next decade and reach net zero carbon emissions by the middle of the century.

In June 2019, the UK became the first major economy to pass legislation to end its contribution to global warming and bring all greenhouse gas emissions to net zero by 2050, putting clean growth at the heart of our modern Industrial Strategy and seizing the economic opportunities that transition to a greener economy creates.

2050 may seem some way in the future but work is underway to ensure we get there in incremental steps. The Climate Change Act introduced carbon budgets for the UK Government, which cap emissions over successive five-year periods.

The Climate Change Committee has developed a ‘Balanced Pathway’ as the basis for their latest recommended Sixth Carbon Budget. While it is not a prescriptive path that must be followed exactly, it provides a good indication of what needs to be done over the coming years.

How is the need for reinforcement identified?

With an ambitious target for net zero emissions by 2050, the National Electricity Transmission System (NETS) will need to transform rapidly while continuing to deliver reliability and value for consumers.

A part of the National Grid Electricity System Operator (ESO) role is to lead an annual cycle which assess and make recommendations to reinforce the NETS, in order to meet customer requirements economically and efficiently.

This is done in four stages:

What this means for the National Electricity Transmission System (NETS):

The Future Energy Scenarios sets out credible ways that the UK can achieve Net Zero by 2050, as well as the UK Government’s commitment to a decarbonised electricity system by 2035. Based on extensive stakeholder engagement, research and modelling, each scenario considers how much energy we might need; where it could come from; and how we maintain a system that is reliable.

In short fossil fuel-based generation is being phased out and will be replaced with renewable and low carbon generation that will be located elsewhere on the network, much is planned to be installed along the East coast. This will be coupled with greater consumer demand as other sectors of the economy move away from fossil fuels and increasingly rely on clean electricity. This will put significant pressure on the NETS which will need to be upgraded to cope and ensure reliable supplies are maintained.

Multiple significant reinforcements are needed to the NETS up and down the East coast:

How do transmission boundaries work?

The Security and Quality of Supply Standard (SQSS)

The network is planned and operated under a set of standards designed to ensure there are no widespread electricity supply interruptions, even if two circuits are out of service.

The SQSS is designed to ensure:

The need in East Anglia 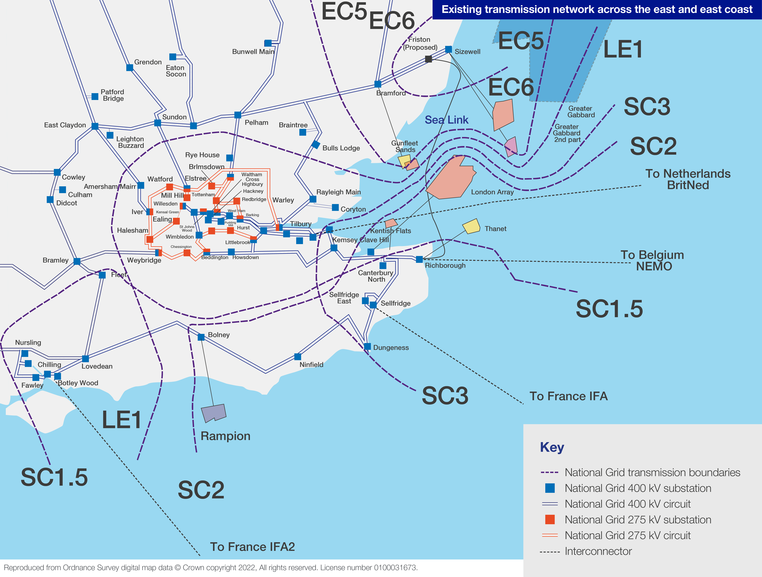 View a larger version of this image here

The national electricity transmission system (NETS) in East Anglia is encompassed by the EC5 boundary. The network in East Anglia was largely developed in the 1960s, built to supply regional demand, centred around Norwich and Ipswich. A large loop runs from Walpole in the north of the region to Pelham and Rayleigh/Tilbury in the south, via Norwich and Bramford.

The coastline and relatively shallow waters around East Anglia are attractive for the connection of offshore wind projects. The existing nuclear generation site at Sizewell is one of the approved sites selected for new nuclear generation development. New interconnector projects are also contracted to connect within this area.

The growth in offshore wind, nuclear generation and interconnector capacities connecting behind this boundary (a boundary splits the system into sections and shows where there are high-power transfers between parts of the network) greatly increase the power transfer requirements out of the region as local total generation will exceed local demand.

The existing high voltage electricity network in East Anglia does not have the capability needed to reliably and securely transport all the energy that will be connected while meeting the SQSS. Several network reinforcement projects are planned to address the shortfall of which Sea Link is one.

In addition to reinforcing the EC5 boundary, by connecting Sea Link into the NETS at the proposed Friston substation it also reinforces the Bramford-Sizewell radial circuits, which are due to carry additional power from offshore wind, new nuclear and interconnectors, so offering additional constraint savings to the consumer

The need in the South and East

The south of England transmission region includes boundaries LE1, SC1, SC1.5, SC2 and SC3. The LE1 boundary almost exclusively imports power from the north and west of England into the south-east.

Power flows in the region are determined by the need to meet domestic demand in the South East as well as imports and exports to Europe via interconnectors.

As more energy is pulled across London and into Kent, power flows across LE1 are set to increase.

Demand for electricity will grow; interconnectors will exchange more energy with European countries to help balance intermittent sources of power; and local generation in the region will reduce. As a result, the electricity transmission network in the South East will need to be reinforced to ensure it is able to continue operating safely and securely.

The network reinforcement needs identified in both East Anglia and the South East were reviewed together. A single solution which simultaneously dealt with both constraints was selected. The identified reinforcement that will help achieve this is an offshore 2GW HVDC link between Suffolk and Kent.

How we develop projects

We undertake a phased options appraisal and assessment process when developing proposals to reinforce our network.

The options appraisal process has been designed to meet our duties and also follows other relevant policy and guidance when making judgments and decisions on the project. This has included consideration of the relevant National Policy Statements, the Holford Rules (which apply to the routeing and design of overhead lines) and the Horlock Rules (which apply to the location and design of substations). There is no specific guidance regarding routeing of underground and marine cables, but we have applied the principles of the Holford and Horlock Rules where applicable.

Further details on these policies and guidance can be found in Corridor and Preliminary Routeing and Siting Study (CPRSS)8 report.

We are currently at the Options Identification and Selection stage of the process (step 2, as highlighted on our timeline) and we are seeking feedback during this consultation on our work to date. Your feedback will help to shape our project as we move forward.

National Grid employs two sets of rules and guidelines for the routeing and siting of new energy transmission infrastructure, which we have applied to this project where relevant.

The Holford Rulesprovide guidelines for the routeing of high voltage overhead transmission lines. These are important guidelines during the development of a preferred alignment and considerations of whether certain sections should be undergrounded.

The Horlock Rules provide guidelines for, the design and siting of substations and converter stations (in addition to cable sealing end compounds and line entries). When considering new electricity infrastructure, National Grid has regard to the degree to which options comply or deviate from these rules.

Please get in touch if you have any questions or comments on the Sea Link development.

Write to us: FREEPOST SEA LINK (no stamp or further address details are required)