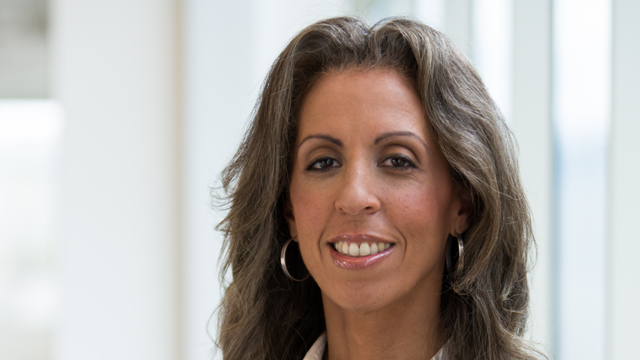 Lisa Lambert, National Grid’s Chief Technology and Innovation Officer, reveals the drive that turbo-charged her own career to become Founder and President of National Grid Partners (NGP) – the innovation and investment arm of the organization – and her practical advice for women to support each other and advance in the male-centric world of tech.

From her high school years, Lisa wanted to be general manager of a company. “I didn't have exposure to role models with professional careers, so I suspect that instinct came from a desire to work with people and to have an impact on society,” she says.

Lisa was born in Toledo, Ohio to an African-American couple, who were unwed. She was ultimately raised by her mom, the youngest child with four older half siblings. Her twin sister was stillborn.

“My family had a significant role in forming my character; just seeing how hard my mom worked in various jobs to support us, and how difficult it was for her to make ends meet, made an impression. Being a single parent and a person of color in those days had a taboo associated with it.

“My three sisters and my brother are all exceptional people, but they weren’t role models for me professionally. I was the first person to graduate from university in my family, so that was a big deal within our household.”

Lisa earned a full basketball scholarship to Penn State University, where she was elected team captain for two consecutive years. On entering college, she switched majors from business law – “too many volumes of uninspiring memorization” – to the entirely new discipline of management information systems.

The first to study information systems

She says: “This is back in the 80s before the dot.com boom. I loved the classes. It was a combination of computer science and business science. How do operations work? How do you use technology in a way that helps them work? So, accounting information systems and other functional applications of technology turned out to be exactly the right thing for me.”

After university Lisa returned home to be close to her family and worked for three years as a software developer for Owens Corning, the manufacturer of insulation, roofing and fiberglass composites. From there she moved into sales and business development within the same company.

Putting together a career roadmap

Next step in her career journey was completing a two-year Masters in Business Administration at the Harvard Business School, after which she headed to Silicon Valley and a new job in technical product marketing at Intel. She later moved to Intel Capital, the chipmaker’s investment, innovation, mergers and acquisition arm, where she worked her way up to become Vice President in 2010. She then co-managed clean-technology venture capital firm The Westly Group, from where she was recruited to National Grid to become Chief Technology and Innovation Officer and start National Grid Partners. She’s also mom to two sons, aged 10 and a half and nine.

Lisa says: “When I left college, I put together a roadmap for my career. I can still recall the details in the document. It was a forward-thinking plan, to acquire the experience and skills that I needed to get to be a general manager of a large product or technology company – my ambition at the time.

“I made adjustments as I went along, but staying with that roadmap was huge for me. It was specifically about developing functional expertise – from getting an MBA to working in sales, product, marketing and strategy. I did all those things because I wanted a broad experience.”

But Lisa admits that, for all her planning, her career took an unexpected swerve when she started working at Intel Capital. “That’s when my idea of being a general manager went to the wayside, because I started investing and I loved it; and I still love it as much as I did back in 1999 when I first started.

“I love the engagement with the start-up community; people who are really smart, ambitious, goal-orientated and risk takers, those are the people I love working with. And I think I have a natural aptitude for investing. It suits me.”

Lisa has four key pieces of advice for women like herself, who are working in traditionally male-dominated roles.

1. Focus on a specialism

“My practical advice would be to specialize in your career, do something that inspires you and that you are exceptional at. Spend time going deep in an area and becoming an expert, because you can always go broad later.

“Women tend to be generalists or behind-the-scenes people. Our natural orientation is to support. This is what we do in the family. We’re nurturers and helpers but you don't get promoted often for doing that in a corporate setting.

“Men may have 20% of the skills for a new job, but they believe they can learn the rest on the job. Women tend to be just the opposite, believing they need to have 80% of the skills to get the promotion.”

2. Create your own support group

Eight years ago, Lisa channeled her own frustrations during a difficult time at work to found UPWARD, a global network for executive women, which now numbers nearly 7,000 members.

“One of the reasons I started UPWARD was to create a community for executive women in the high technology and venture capital sectors, both of which are notoriously poor at promoting women. It’s difficult for women to make it to the senior leadership levels and it can be intimidating when there are no other women to use as a sounding board for your experiences.

“Being able to exert my disappointment into something constructive and outside my professional world helped me.

“You need to build a support system to help you through the times when you either are in doubt of your own ability or you're dealing with a difficult boss or challenging situation; or you're simply trying to balance life and work and manage those trade-offs.

“There is something powerful about being with a peer group of women, being able to share experiences and talk about how you resolved problems and issues, coming together and supporting each other. And for younger women, it’s helpful to have a support network of women who will tell you how they did it.

“When I think of mentoring and role models I think of a composite of people, because there are different skills that you’re looking for over the course of your career. I’m particularly impressed with people who had a rough start in life and managed to overcome difficulties, because I can relate. You need a lot more grit to succeed if you’re coming from poverty.”

“I do think grit is important. It’s not just believing in yourself and your own personal ambitions; it's about valuing your contribution to the world and believing that’s worth fighting for and expressing. When you face opposition, whether it’s bureaucracy, politics or a competitive environment – all of which are present – you persist. When you fall, dust yourself off, get back up and go at it again.

“I’ve seen it with young students who have the skillset to be great engineers, but they decide to do something else because they are not accepted in that male-dominated culture. And I've seen it with professional women, who just hit a wall and decided to pursue another career that's less competitive or raise a family.

“Women need to see that they can do it, but they need to have support on how to navigate the rough terrain and the confidence from seeing other female role models.  It’s a matter of believing in yourself and never giving up – if we do that, we will eventually win.”

“The numbers of women doing STEM subjects have dropped dramatically since I was at university. Back then women weren’t encouraged to be out front, to be leading, to be movers and shakers. We didn’t have those role models. But doing a respectable research or technical job in a science discipline was a good opportunity for a woman.

“Today, technology is at the center of everything, so the culture of engineers and computer scientists has dramatically changed, with more capital accumulated in the sector and people pursuing it with vigor.

“The exclusively male environment is very strong, so women often don’t feel comfortable. It’s not one that supports them and encourages them to participate. Today there’s so much capital attached to the digital world, it’s made it more difficult for women, so you really need to persist and have a support group.

“But it’s a tragedy, because women are naturally gifted at programming. It’s a lot about structured and analytical thinking, and myself and the women I know have that in spades. And secondly, technology needs more representation of women and people of color.”

Where do we go from here?

“We’re at a pivotal time in the world today. Our modern-day culture often encourages women to focus on what we don’t have, rather than celebrating what we possess. I believe that we each have an assignment to fulfil on earth that is uniquely ours. If we don’t pursue it with all our might, the world may never see the intended benefits. So, let’s throw caution to the wind and pursue our dreams – we’ll be glad that you did.”