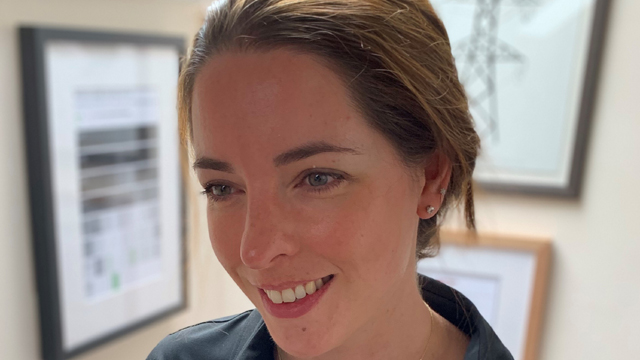 We can be HERoes: Why role models matter

Relatable role models helped to shape Head of UK Strategy Claire Dykta’s aspirations in the early stages of her career. Now that she’s been recognised as a role model herself, she talks about why they matter and how she hopes to inspire others.

Recognised in this year’s global HERoes Women Role Model list of 100 leading executives, our Head of UK Strategy Claire Dykta talks about why role models matter and the particular importance of diversity as we work towards achieving net zero.

Inspired by role models from the start

I studied Managerial and Administrative Studies at Aston University and graduated in 2004. I actually joined National Grid before that, in 2002, on work experience at Transco (which later became National Grid) as part of my degree. I expected it to be just for the year, but I then joined the graduate scheme because I’d enjoyed my placement and could see the possibilities for career progression.

At first I found it hard coming into an engineering company as a non-engineer. But even early on, I could see role models who demonstrated that it was possible to do things in a different way and that varying perspectives are valuable. As a result, I really care about making sure we have diversity of thought in the energy sector.

I’m now responsible for corporate strategy for the UK regulated business. My role is to look outside of National Grid at what’s happening in the energy market and beyond, and to then answer some of the critical questions that will impact the future of the business. Questions such as ‘what are the opportunities and challenges that net zero will create for us and our stakeholders?’.

I really enjoy being in a role that is about taking a step back, looking at the big picture and thinking about the impact of this. You don’t get time to do this so much in the more day-to-day operational roles that I’ve held previously.

Role models for everyone

It’s beneficial to have people around you who you can see succeeding and who you can relate to. If you’re male you can look around our industry and a high proportion of your senior colleagues will be men, so it is easier to identify a role model. With a smaller pool of women, it’s harder to do that – to find someone you can relate to who has similarities to you, whether that’s caring responsibilities at home or someone with the same career specialism or background as you.

We need a diverse set of role models to allow others to look across and see that success is achievable.

In the early stages of my career, there were a handful of very senior women in the energy industry who were inspirational, but when you’re in your twenties they’re not relatable to where you’re at. It can be helpful to also have role models who are closer to you in their career progression or age.

There were some senior women who had a huge influence on my early career and I believe they’re partly responsible for where I’ve got to. This is why I feel an obligation to give something back – I’d like to do the same for others.

That said, there were some senior women who had a huge influence on my early career and I believe they’re partly responsible for where I’ve got to. This is why I feel an obligation to give something back – I’d like to do the same for others.

I now mentor others – men and women who are both at National Grid and elsewhere. Sometimes this has come about after I’ve spoken at a conference and someone has approached me afterwards, and we’ve messaged informally to talk through a specific issue. Some have gone on to become longer-term coaching and mentoring relationships.

I’m pleased and proud to be part of the HERoes list that recognises the efforts of so many females who are working to increase diversity in their sector. I hope it will highlight the opportunities for women in the energy industry across a real diversity of roles.

I’ve also become part of an informal support group for young, relatively senior women working in energy. We’re all in our thirties and are a group of friends who originally met through social media.

There’s a gap in role models who are quite senior at this age, when we’re often going through life challenges and changes in responsibilities outside of work. We’re now looking to set something more formal up to widen that support and make it available to others.

Through my role in the energy industry, I’d love to be recognised as someone who helped lead the transition to net zero and who, on the way, contributed to diversity and inclusion in the industry. The two are inextricably linked; we won’t achieve net zero without making sure we have diverse minds leading the way.