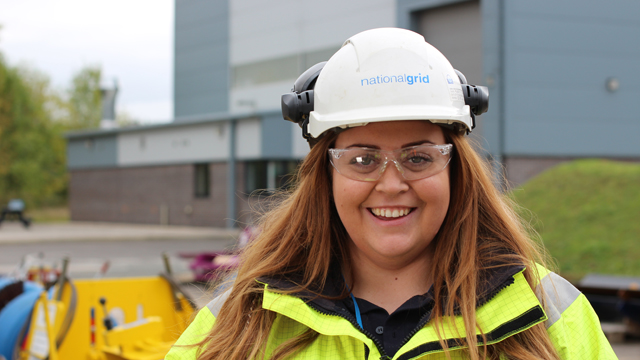 You can be whatever you want – look at me!

Senior Engineer – Welding may not be a job title traditionally associated with women, but Kirsty McDermott has been a trailblazer for women in engineering since she started her career at the age of 16.

In her first job, Kirsty was the first ever female apprentice to be employed alongside 200 men welding bus chassis. Now she’s the only Senior Engineer – Welding in National Grid Gas Transmission. Stereotype-smashing Kirsty is also studying for a Masters in Welding Engineering.

“I wish I could say I’d never experienced any issues as a woman in engineering, but in the early days of my career I did,” says Kirsty, 31, who’s based in Warwick. “When I was 18, I told a manager I wanted to be a team leader and the response was ‘you’re a little young and you are a girl’. And at a conference six years ago, on being assured I was the lead engineer, one man insisted ‘How can you be? I can’t talk to you.’

“That sort of attitude has always made me want to prove myself to others even more – I love challenging stereotypes. I love eyelashes, hair extensions and painted nails, and the usual reaction to hearing I’m an engineer is surprise.

“I often get comments like ‘you don’t look like an engineer’. I have no idea what an engineer is supposed to look like then. It’s getting better though. I don’t know if that’s because this company is so inclusive or that attitudes are changing generally.”

Discovering engineering as a career

After doing well in her GCSEs, Kirsty started A-levels but swiftly discovered that lessons bored her. A college careers advisor suggested a series of aptitude tests, which pointed the 16-year-old firmly in the direction of engineering.

“At the time I was loving helping my stepdad do up my car, but I’d always thought engineering was all about maths equations or men in hard hats and high vis,” says Kirsty. “So I did an apprenticeship in welding and fabrication.”

Kirsty’s first job was as a welding apprentice working on bus chassis in a Blackburn factory. “After my interview the foreman said, ‘You do realise we’ve never employed a female apprentice before.’ There were no ladies’ toilets, so I got my own key to the foremen’s one and they had to go in with everyone else.

“I loved the work ethic on the shop floor – they were all so supportive and encouraging of me.”

At the age of 21, Kirsty moved to a management role in a Lancashire steel fabrication factory. “I was telling blokes who’d done the job for 30 years that they could do it a bit better with different processes,” she says with a wry laugh.

In September 2012 she joined National Grid on the Gas Transmission Engineer Training Programme, now known as the Higher Apprenticeship.

“I wanted a job making a difference with one of the big companies; being the change whether in innovations or climate change,” says Kirsty. “I started as a Higher Apprentice, moved up to Project Engineer and now I’m Senior Engineer – Welding. I’m also doing a Masters at Cranfield University in Welding Engineering. I’m the only woman on my course, with people from all over the world.

“I’ve always found physical welding really therapeutic and creative. I did an evening course a couple of years ago, just to keep my hand in, and helped a farmer build a wheelbarrow.”

But Kirsty is keen to point out that she does no welding herself in her job. “In my current job, I’m responsible for all welding work on the gas transmission pipelines. I’m constantly reviewing procedures, construction processes and quality assurances,” she says. “I work on industry policy reviews and standards too.”

“I love seeing where I fit into the bigger picture and I feel a real responsibility. There are over 7,500 km of gas transmission pipelines across the UK to keep the gas flowing and homes and businesses warm and cosy. Each pipe is 12m long and the welding is what keeps it all together. It’s a real skill, with teams of around only eight welders working together on projects like pipeline diversions and compressor upgrades. I have a lot of respect for what they do.”

In 2019 Kirsty was named one of the Top 50 Women in Engineering by the Women’s Engineering Society and in February 2020 she was invited to Houston, Texas to receive a Young Achievement Award at the Pipeline and Pigging Integrity Management Conference.

“I was really proud of that, because it was recognition of the work I’ve done, not because I’m a girl” says Kirsty. “But I wish I hadn’t worn heels on stage. I was so nervous, it was a big audience!”

Her advice to young women who are interested in following a career path into traditionally male dominated roles is simply ‘aim high’.

“You can do whatever you want,” she says. “Your age or gender should never define what you want to do.”