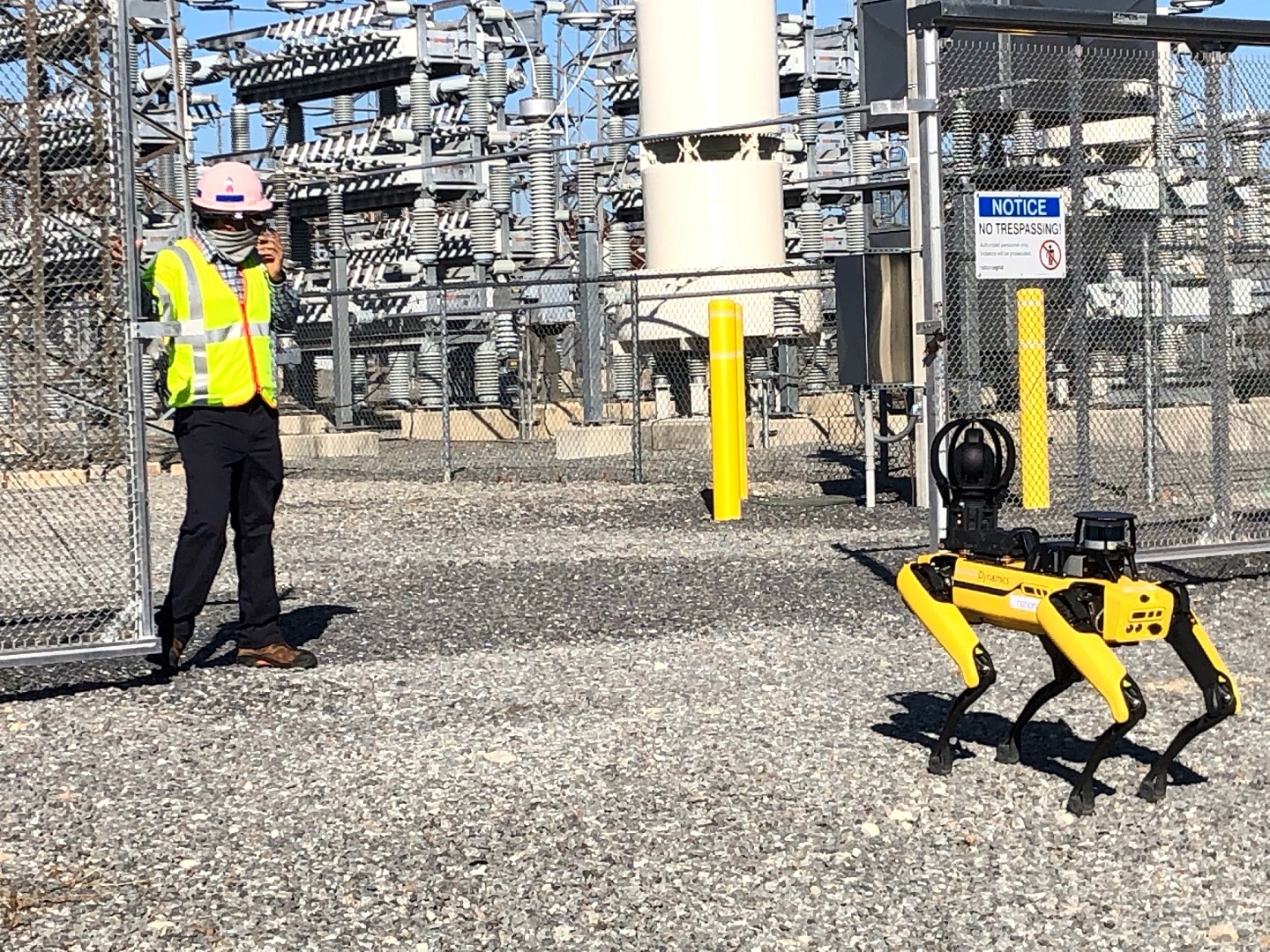 At National Grid we’re always looking to the future, exploring new innovations and efficient ways of working, while ensuring our employees stay safe. Spot the robot dog is part of the new guard, conducting essential safety inspections at one of our US electricity substations.

Spot the robot dog is not like any dog you’ve seen before – he has a shiny yellow coat, is bandy legged and has a zoom camera for a head. But he’s most certainly working like a dog, carrying out critical safety inspections at the high-voltage Sandy Pond electricity substation, without the need for lengthy shut-downs.

Dean Berlin, Lead Technology Analyst has been exploring all Spot’s new tricks that will keep staff safe. He explains: “The Spot robot allows us to collect better information about our equipment, while also keeping our employees out of harm’s way. Its panoramic tilting optical camera allows us to zoom up to 30 times on any of our assets or gauges we need to see.

“It also has a thermal infrared camera, which produces thermal imagery of what it’s seeing, allowing us to look for any hot spot or thermal anomalies in the equipment.

“Spot allows us to complete our inspection tasks regularly and repeatedly, while keeping our employees further back from the equipment.”

And Spot’s not difficult to take for walks. “It’s pretty easy to use, kind of like a video game,” says Berlin, of the robotic dog created by Boston Dynamics. “There’s a tablet controller and it has plenty of safeguards.”

The Sandy Pond substation is the terminus of a 930-mile high-voltage, direct-current overhead transmission line, bringing hydro-electric power from the north of Canada into north eastern United States. The transmission line is one of the main sources of clean energy for the Boston area.

Sandy Pond has extensive equipment that needs constant inspection and monitoring, including the thyristor valve hall – a five-storey building with a footprint the size of a soccer field. This is where direct current (DC) of 450,000 volts is converted to alternating current (AC) of 345,000 volts, before being distributed to homes and businesses.

Our video and photos show Spot sure-footedly completing outside inspections, but it’s inside this massive hall that the four-legged robotic dog really earns his keep. The thyristor hall is highly electrified and people are not allowed in there during operation. Until recently, when inspections were conducted by people, the hall had to be shut down to ensure the safety of the inspectors and restarting can take hours.

But Spot can enter the electrified hall and conduct critical visual and thermal inspection while its controllers are safely outside, without the need to go offline. This allows the Sandy Pond operators to immediately determine if maintenance and repair work is needed, and this advance inspection work ultimately allows crews to know where they will need to work and what parts to order.

“We didn’t want the electrical field to disrupt any of the electronics inside the robot or for the robot to affect the sensitive thyristors, so we did some tests before,” Berlin explains.

“We we were also concerned whether it could maintain the appropriate approach distances. Even though the robot can be inside these areas of the hall, it could not get closer than nine feet to any energized equipment, or 10 inches to the walls.”

Spot passed all the tests and was allowed into the hall.

“To the best of our knowledge, a robot had never been inside an energized thyristor valve hall before,” says Berlin. “Using Spot, we’re doing the same things we’ve always done, but we can do them faster and more efficiently.”

Spot is also able to enter the pump hall and record the status of valves from every angle, taking numerous pictures, which the project crew then review. The team’s largest concern, initially, was whether Spot could withstand the electrical field of the thyristor hall.

Putting Spot through his paces started last May (2020), in a trial partnership with Boston Dynamics.  So far, National Grid has two robot dogs – named Dante and Lumos (Spot is the brand name). One is ‘kennelled’ at Sandy Pond, while the other serves as backup and is being considered for other locations.

Using a pack of robotic dogs in the future will allow us to perform condition-based maintenance, rather than performing maintenance at set time intervals.

Inclusion and sustainability are both key to our commitments at National Grid, and one of our most exciting developments in the past year has been the P1 Compound, a pilot project to introduce a variety of neurodiverse and sustainable elements into construction site cabins.

In the run-up to the eagerly anticipated global climate change summit COP26, UK Executive Director Nicola Shaw and US President Badar Khan explain what we’re doing to tackle climate change now and in the future.