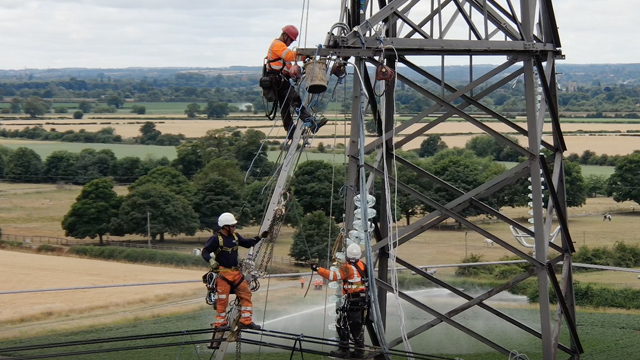 • 170km of overhead power line between Lincolnshire and Hertfordshire is being refurbished.

• First phase from Lincoln to Peterborough complete, with the second phase completing in 2023.

• Engineers have installed 1440km of new overhead line working at heights of up to 50m.

• Refurbishment forms part of National Grid’s £1 billion annual investment in maintaining and upgrading its infrastructure to ensure a resilient and reliable network for homes and businesses in England and Wales.

National Grid has completed the first stage of a £130 million project to refurbish the existing overhead line network, (the high-voltage wires that transport electricity) between Lincoln and Stevenage.

Work on the transmission line which runs from Cottam Power Station, near Lincoln, to Wymondley Substation near Stevenage passing near Newark, Stamford, Peterborough and Hitchin, started in March this year and will take two years. National Grid’s Operations teams and Morrison Energy Services have been working at heights of up to 50m, installing around 1440km (895 Miles) of new overhead line to replace the original, which was installed in the 1960s and is now approaching the end of its scheduled working lifespan. Engineers will have installed a further 1670km of new overhead line when the second phase of the work is completed in 2023.

The refurbishment of this piece of the national network enables power to continue to feed into regional electricity networks, who distribute it to homes and businesses at lower, more usable voltages. Once complete, the new line will not only strengthen the existing infrastructure from Lincolnshire through to Hertfordshire but will also ensure the network is able to continue to transport increasing volumes of renewable power.

The project forms part of National Grid’s management of the high-voltage network in England and Wales. 900 operational colleagues work 365 days a year to maintain the network, monitoring 22,000 pylons, 4500 miles of overhead line (the same distance as London to Miami) and 900 miles of underground cable.

More than £1 billion a year is invested to adapt and upgrade the transmission network, ensuring it is robust against severe weather, including storms and heatwaves and also enabling the connection of more renewable power to help reduce emissions.

Typically, pylons will last for about 80 years, whereas the conductors, insulators and fittings in overhead lines normally last for about 40 years.  Overhead line refurbishment is carried out as two separate periods of work. Overhead lines have two circuits, one on each side of the pylon, so work is carried out on one side only, in order that the other side can be kept ‘live.’ Once all the work has been completed on one side of the overhead line, the circuit is re-energised, and the opposite side is switched off so that the work can be carried out on that side.

The line is divided into wiring sections of typically 10-15 pylons (between 3.5 and 5km). The old overhead lines are dropped into temporary running blocks, which are suspended from the cross arms of the pylons and then winches are set up at either end of the wiring section.

In addition to replacing the overhead lines, specialist teams climbed and surveyed 248 pylons along the 170km route and fitted 52 tonnes of steel to reinforce the pylons to support the new line system.

Martin Bage, Overhead Lines Engineer for National Grid said: "This project is just one example of how our engineers work every day to maintain the electricity network in England and Wales. The excellent progress we are making on this refurbishment is testament to the skill and great teamwork of all involved.

"We look forward to completing the second half of the project and continuing our work ensuring our network can play its part in delivering safe and secure electricity.”