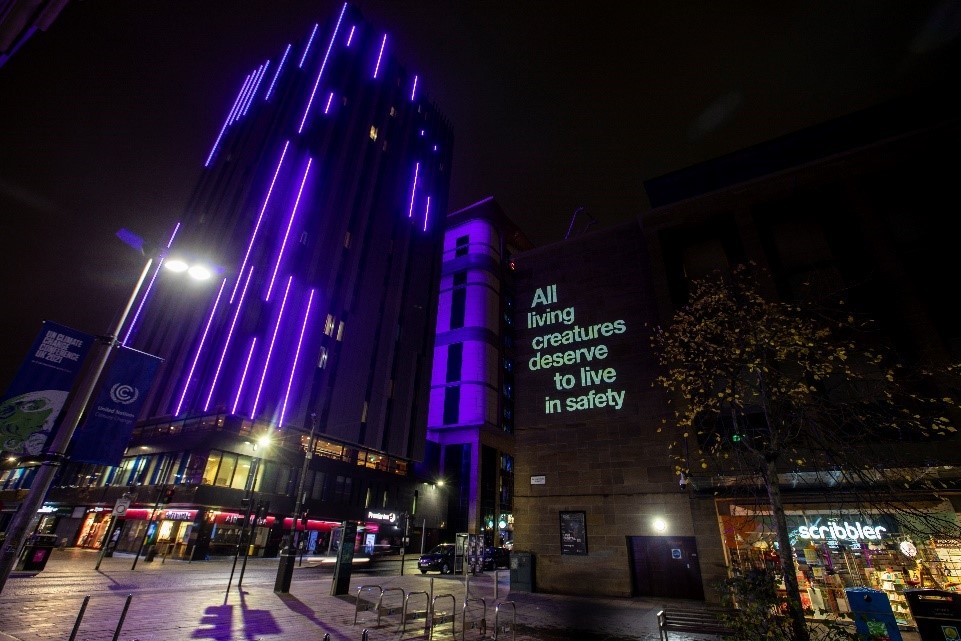 Famous landmarks in three UK cities were lit up this week with messages for world leaders on climate change to encourage them to act ahead of the crunch talks over the next fortnight.

Days before world leaders gathered in Glasgow, the public called for action with pleas to “keep 1.5°c alive” and “help us change our future”, highlighting that “the small choices of the many and the big choices of the few can move us to a greener future”. Messages have been received from across the globe including France, Austria, India, and Canada to name a few. Closer to home, a Birmingham resident shared “Please help us change our future”, whilst an 11-year-old school pupil from London wanted those in power to “Save our wetlands” and a Carlisle resident shared “I’m scared for my children’s future.”

The light projections were organised by National Grid, so that people could have their voice heard on the environment at this crucial time for our planet.

Messages were beamed onto Tolbooth Steeple, Buchanan Galleries and Central Station in Glasgow - the home of COP26 - as well as the University of Manchester, Arndale Centre and Deansgate Station in Manchester on 29th October and at the Tate Modern, St Paul’s Cathedral and Brick Lane in London on 30th October.

Artificial intelligence to deliver the Voice Of All to world leaders

People across the world submitted their messages via National Grid’s Voice of All website to have their say on climate change. Through the power of an advanced AI, these messages have been gathered into an innovative, stand out speech which leaders at COP26 simply can’t ignore.

Duncan Burt, Chief Sustainability Officer at National Grid commented ‘’There is no time more crucial than now for people to have their say on the climate crisis. This is an issue that will impact us all and it’s vital that everyone has the opportunity to have their views heard. Through the Voice of All and as a Principal Partner of COP26, we want to share a message of hope, while also illustrating the seriousness of what is at stake. By working together, we can make people’s hopes for a greener, more sustainable world a reality.”

The speech will be delivered at COP26 on Saturday 6th November in the Blue Zone.