Skip to main navigation
Sea Link
We are amid an energy revolution and National Grid has a central role to play in the fast-changing energy landscape.

Sea Link will add much-needed capability to the electricity transmission network, enabling low carbon and green energy from other projects to connect to the network and be transported around the country.

Why is Sea Link needed?

Globally, the impacts of climate change from greenhouse gas emissions are being increasingly felt. There is a drive across the world to keep global warming to no more than 1.5 degrees above pre-industrial levels. 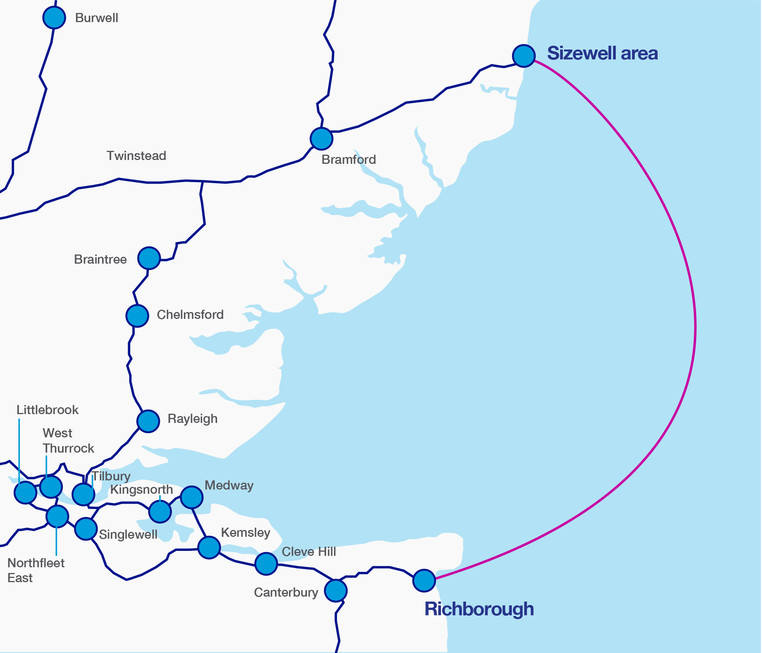 To address this, in 2019 the UK became the first major country in the world to pass laws to end its contribution to global warming by 2050. This target requires the UK to bring all greenhouse gas emissions to Net Zero by 2050. In October 2021, the Government published its Net Zero Strategy: Build Back Greener, a long-term plan for a transition that will take place over the next three decades.

This strategy sets out a number of goals, including the need to achieve 40GW of offshore wind by 2030, and a fully decarbonised electricity supply by 2035 (subject to security of supply). A clean, reliable electricity network is the foundation of a productive net zero economy as the UK electrifies other sectors such as transportation and heating.

We have already made great strides to achieving these goals over the last decade. The share of zero-carbon electricity has grown from less than 20% in 2010 to almost 50% in 2020, with carbon-emitting sources decreasing from over 75% to 35% in the same period. In 2019, zero carbon power outstripped fossil fuel for a whole year for the first time.

But more needs to be done to meet the Government’s targets, and our national electricity network must evolve to connect far more coastal renewable generation in order to reach the 2050 target.

Why Suffolk and Kent?

A large number of offshore wind projects are being developed around the UK by various companies, and 25GW of their generated energy will be looking to come ashore and connect to homes and businesses up and down the East Coast by 2030.

The existing transmission network in this part of East Anglia was developed in the 1960s and until today has been able to meet demand and transmit the energy produced by Sizewell B and offshore wind farms such as Galloper and Greater Gabbard out of the region. By 2030, the amount of renewable and low carbon energy connecting to the network will dramatically increase – 17.4GW of which is contracted to connect in East Anglia by the end of this decade.

As a result of this increase, the existing network in Suffolk does not have the capability needed to reliably and securely transport all the energy that will connect by 2030 out of the region. Adding a new High Voltage Direct Current (HVDC) electricity link will provide additional capacity to deliver that clean, green energy to where it is required.

These additional power flows cause equal challenges on the network in Kent. During periods of high wind generation from offshore wind farms on the east coast, electricity will need to be exported to Europe via interconnectors to balance the electricity network. Many of these interconnectors being developed will be located along the south and east coasts of the UK, where the majority of the UK’s existing interconnectors are already located.

But to enable this surplus electricity to be exported, energy has to be first transferred from where it is received in East Anglia to where interconnectors connect into the network in Kent and the rest of south-east England. In times of low wind generation, we will also need to import electricity through these interconnectors to meet national demand.

Our existing network is not able to cope with this level of transmission between the two regions, and so we need to develop a new undersea link between the locations where energy is connected into the network and where it’s imported and exported out of it. By connecting East Anglia and Kent, Sea Link will provide the additional network capacity needed to enable the import and export of wind energy to and from Europe.

Coordination with other developers in Suffolk

Tackling climate change means more of Britain’s energy will come from low carbon and renewable sources. For that to happen, we need to build new electricity infrastructure that will take energy from where it’s generated to where it’s used.

Reinforcing and adding to Britain’s electricity system means difficult decisions about building on our landscapes. Our aim, as we adapt and develop our network, is to keep the impact on people, places and the environment to a minimum. In East Suffolk, we’re exploring how we can reduce the impact by considering opportunities for coordination between National Grid projects in the same area – co-locating new buildings and sharing construction areas, for example.

Coordinating projects could allow us to reduce impacts of construction on areas that host new infrastructure, while connecting clean, green energy and meeting Government’s target to decarbonise our energy system.

In summer 2022, we will be holding a public consultation to outline our emerging proposals. This includes our early proposals for the routing of the onshore and undersea cables, together with potential landfall and converter station locations. The consultation will also explain the level of coordination that may be possible between Sea Link and the proposals for Nautilus Interconnector.

In December 2021, we commenced preliminary onshore surveys to investigate a number of factors that will inform the proposals we present at our consultation in Summer 2022.

These surveys will over factors such as noise, ground conditions, landscape and visual, traffic and biodiversity, amongst others.

All key stakeholders, such as the local planning authorities and environmental bodies (such as Natural England) have been fully informed of our planned works.

National Grid will be undertaking the Ecology Phase 1 survey, these will take place:

The Ecology Phase 1 survey usually consists of two surveyors, typically both ecologists, though the second is usually required for health and safety purposes so isn't always an ecologist. Each surveyor will have hi-vis clothing on so that they are easily identifiable.

The surveyors visit the survey areas and the vegetation and any species are mapped onto Ordnance Survey maps, usually at 1:10,000 scale. A desk study using aerial photographs will be used prior and the walkover will provide further clarity.

National Grid sits at the heart of Britain’s energy system, connecting millions of people and businesses to the energy they use every day. We bring energy to life – in the heat, light and power we bring to our customer’s homes and businesses; in the way that we support our communities and help them to grow; and in the way we show up in the world. It is our vision to be at the heart of a clean, fair and affordable energy future.

Our individual companies run the systems and infrastructure that deliver electricity and gas across the country.

Learn more about us by visiting our main site.

We are committed to making project information accessible to all users. If you need any information or documents in an alternative format such as large print, Braille or audio tape, get in touch via [email protected].

For general enquiries or to register for project updates, please use our contact form below, or contact us by: