Skip to main navigation
East Anglia GREEN
We are amid an energy revolution and National Grid has a central role to play in the fast-changing energy landscape.
East Anglia GreenAboutPublic consultationDocument libraryFAQsNewsContact us

East Anglia GREEN is a proposal by National Grid Electricity Transmission (National Grid) to reinforce the high voltage power network in East Anglia between the existing substations at Norwich Main in Norfolk, Bramford in Suffolk and Tilbury in Essex, as well as connect new offshore wind generation.

The UK Government has indicated its ambition to achieve net zero emissions by 2050. This means achieving a balance between the greenhouse gases put into the atmosphere and those taken out. The energy industry plays a key part in this transition, from developing renewable energy generation technology, to upgrading the existing transmission network to allow communities across the country to benefit from this clean energy.

What works are proposed for East Anglia GREEN?

The network reinforcement that East Anglia GREEN will provide would be achieved by the construction and operation of a new 400 kV electricity transmission line over a distance of approximately 180km and a new 400 kV connection substation.

The reinforcement would comprise mostly overhead line (including pylons and conductors – the ‘line’ part) and underground cabling through the Dedham Vale Area of Outstanding Natural Beauty (AONB) and a new 400 kV connection substation in the Tendring district.

The new substation site would be fenced and would contain high voltage electrical equipment, such as transformers, circuit breakers and shunt reactors, support structures, control buildings, a permanent access road and parking areas.

Works would be required at the existing 400 kV substations at Norwich, Bramford and Tilbury. Cable sealing end (CSE) compounds would be required to connect sections of underground cable with the overhead lines. Each CSE compound would be fenced, and contain electrical equipment, support structures, a small control building and a permanent access track.

The indicative timeline below details our anticipated development programme, including when we will consult on our proposals and when you will be able to share your views. 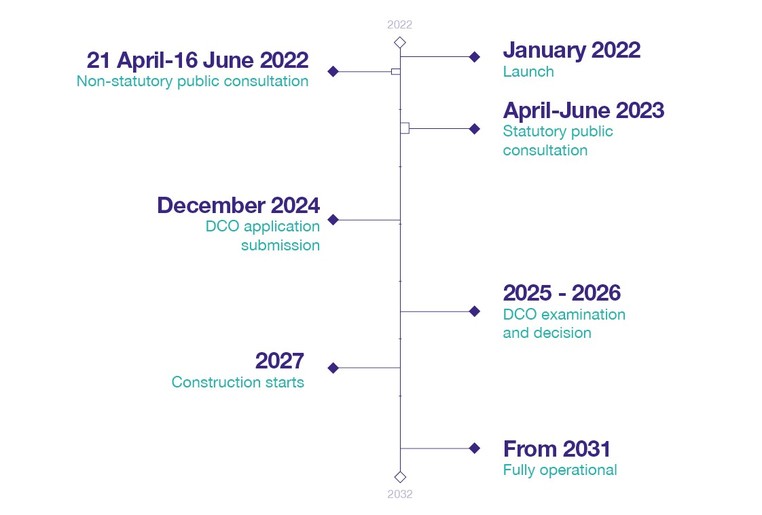 What if there was enough green energy for everyone?  What if we became clean energy pioneers? What if you could play a part in the UK’s green recovery?

Visit National Grid’s digital hub to find out more about why these critical updates need to happen.

East Anglia’s 400 kV electricity transmission network was built in the 1960s. It was built to supply regional demand, centred around Norwich and Ipswich. With the growth in new energy generation from offshore wind, nuclear power and interconnection with other countries, there will be more electricity connected in East Anglia than the network can currently accommodate. 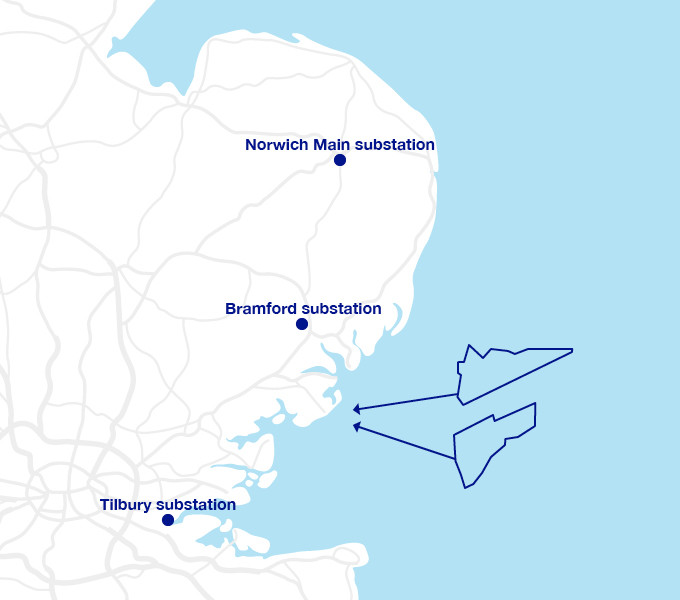 The existing network in East Anglia currently carries around 3,200 megawatts (MW) of electricity generation. Over the next decade we expect more than 15,000 MW of new generation and 4,500 MW of new interconnection to connect in the region.

How is the need for network reinforcement identified

National Grid ESO leads an annual cycle which looks at how much energy needs to be carried on the network in the future, and where network capability needs to be improved to accommodate that.

The overall effect of that process is to ensure that the right efficient, coordinated and economical proposals are brought forward to deliver what the country requires from the electricity transmission system in a way that represents best value to electricity consumers.

In planning and operating the network, transmission licence holders – onshore and offshore – are required by their licence to comply with the National Electricity Transmission Security and Quality of Supply Standard. These set out criteria and methodologies for planning and operating the network in Great Britain – in essence, minimum requirements designed to ensure secure and stable electricity supplies.

The need to reinforce the network between Norwich and Bramford (AENC in NOA) and between Bramford and Tilbury (ATNC in NOA) has been identified as critical to take forward in both the 2021 and 2022 editions of the NOA reports.

The 2022 edition of the NOA confirmed that East Anglia GREEN is a critical network reinforcement to proceed in all Energy Scenarios. We confirmed in 2021, that we will be taking forward work to deliver the reinforcement identified in our Network Development Policy statement.

The Network Options Assessment (NOA): The NOA is an annual report published by National Grid ESO which outlines its recommendations for projects to take forward during the coming year. When a new edition of the NOA is released, National Grid Electricity Transmission will use this to identify where it needs to build new lines and will back check and review the need case for projects that are in progress.

The need for reinforcement in East Anglia

The network today in East Anglia

Like much of the high voltage electricity transmission network across the country, the network in East Anglia was largely developed in the 1960s. It was built to supply regional demand, centred around Norwich and Ipswich, and fed from our Bramford substation.

A large loop runs from Walpole in the north of the region to Pelham and Rayleigh/Tilbury in the south, via Norwich and Bramford. Two 400 kV overhead lines connect Sizewell B, and an unenergised 132 kV overhead line used to connect the now decommissioned Bradwell A nuclear power station.

Historically there was relatively limited generation and low consumer demand in East Anglia, when compared with other parts of the country. In recent years, peak demand for electricity in the region has fallen slightly – from a peak of 1,426 MW in 2019 to 1,346 MW in 2021.

At present, generation in the region currently totals 4,100 MW. Most of this generation (3,160 MW) is directly connected to our network and 940 MW is connected via the UK Power Networks distribution network. We call the locally-connected generation ‘embedded’. This is shown in the table below.

*connected via the distribution network

The Security and Quality of Supply Standard

The network is planned and operated under a set of standards designed to ensure there are no widespread electricity supply interruptions, even if two circuits are out of service.

Each line of pylons on the network carries two electrical circuits.

For example, if one circuit is switched out for planned maintenance and another is impacted by a fault at the same time, the Security and Quality of Supply Standard is designed to ensure:

National Grid ESO oversees the standards, and they are approved by a Security and Quality of Supply Standard panel and Ofgem.

While the network in East Anglia can accommodate the level of generation and demand that there is today, this situation will change over the next decade. New connections for new offshore wind and nuclear power generation projects and for interconnectors are expected into East Anglia by 2030. These are being constructed or expected into substations at Necton, Norwich Main, Bramford, Friston and Sizewell.

Additionally, agreements are in place with two offshore wind farm projects on the basis of their connection into the new East Anglia Connection substation (EAC).

National Grid has a duty to facilitate new connections and maintain a safe national transmission system.

Studies by National Grid ESO considered the capability of the existing network. They took into account the planned upgrades to existing circuits and the proposed Bramford to Twinstead Reinforcement. The assessments, in line with the analysis of credible Future Energy Scenarios, concluded that the existing high voltage electricity network in East Anglia does not have the capability needed to reliably and securely transport all the energy that will be connected while meeting the Security and Quality of Supply Standard (NETS SQSS).

To address this and meet its statutory duties, National Grid needs to reinforce the electricity network in East Anglia. The reinforcement is needed to allow power to be imported to, and exported from, East Anglia and to provide additional capability to allow power flows into and out of the south-east area to connect with areas of demand and interconnectors to Europe. This reinforcement is considered ‘critical’ in all Future Energy Scenarios.

Increasing the capability of the existing network

Before we consider building new parts of the network, we first must consider whether we can achieve more capability by upgrading and strengthening the existing network.

This can involve changing the conductors/wires on some of our existing overhead lines and adding smart power control devices to control the flow of electricity on parts of the network to transport it to where it is needed.

In East Anglia in the first half this decade, we are:

Making these improvements will increase the capability of the existing network, but it is still insufficient to deliver the capability that National Grid ESO advises is required to deliver cleaner, greener energy to homes and businesses beyond the region in line with Government ambitions.

As National Grid ESO has outlined in the last two published NOAs, new reinforcements are needed in the region to deliver on the Government’s ambition to see 50 GW of offshore wind connected by 2030. 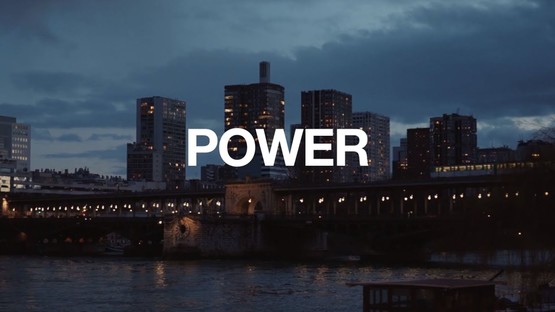 Read information for landowners and persons with an interest in land related to the project.

Our proposals in South Norfolk

Our proposals in Mid Suffolk (and Babergh north of substation) 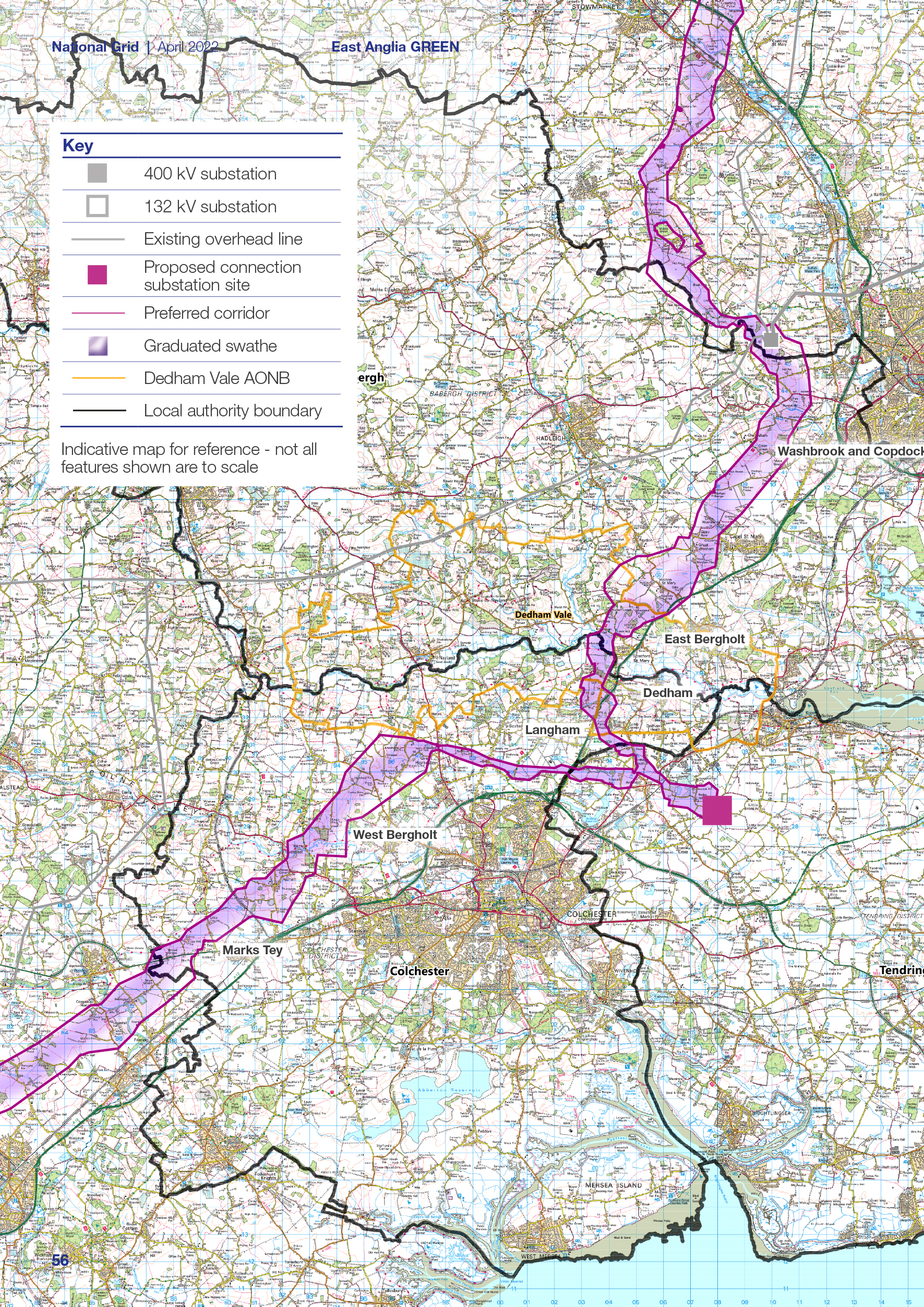 Our proposals in Babergh, Tendring and Colchester

Our proposals in Braintree

Our proposals in Chelmsford

Our proposals in Basildon and Brentwood

Our proposals in Thurrock