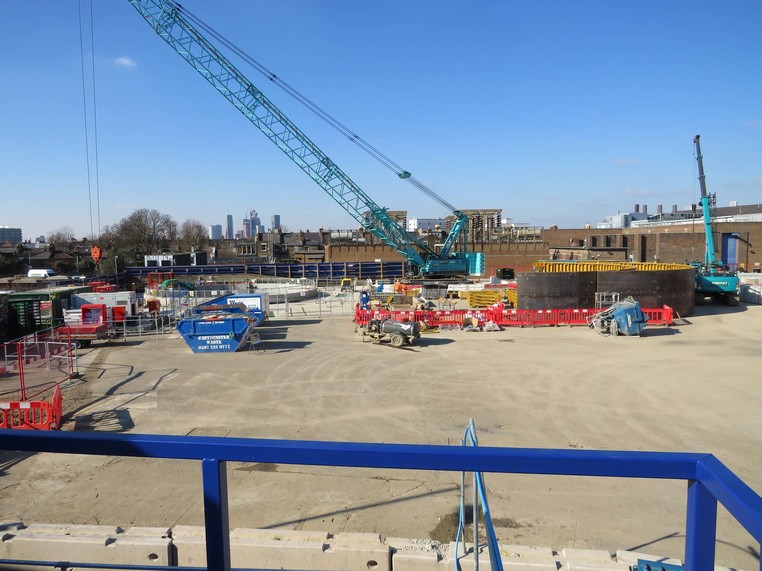 The Bengeworth Road project, based at UK Power Networks’ existing substation site at Bengeworth Road in the London Borough of Lambeth, is a scheme to provide a new customer connection to meet increasing electricity demand. It involves building two new substations (one for National Grid and one for UK Power Networks) along with a headhouse and tunnel shaft, as part of the broader London Power Tunnels (LPT) project.

The works are being carried out under National Grid’s permitted development rights following screening of the proposed works.

With work to build the tunnel shaft nearly complete, construction of the headhouse is planned for summer 2022. Our substation will be built in early 2023 with UK Power Networks’ activity following shortly after this.

We expected the works at Bengeworth Road would be a concern for the community, as the new substation buildings would have a visual impact on some local residents. Additionally, construction would impact the wider area through increased traffic movements, noise and dust.

The existing site is set within a residential area of privately owned terraced houses valued at around £1 million, and as expected, residents had objections and raised concerns about the proposals and associated works.

Building relationships with key political stakeholders was a route to address some of the objections and concerns head-on at an early stage. This approach demonstrated proactive community engagement and involved setting-up a Community Liaison Group (CLG), where concerns and matters were raised and managed. This helped to reduce the impact of our essential works on local people and also helped to ensure our construction programme was protected.

Ahead of going public with our plans, we arranged a briefing with Helen Hayes, MP for Dulwich and West Norwood, and local ward Councillors to make them aware of our proposals. This took place a year ahead of our main works starting and we have continued to maintain a regular dialogue with their offices through monthly updates and meetings.

We also used the MP’s and Councillors’ knowledge of the local area and constituents to help tailor our engagement approach and increase awareness of our works. A key suggestion from these stakeholders on hearing about the low response rate to our first newsletter was to ensure that we sent our communications materials directly to residents through Royal Mail.

As predicted, following the Royal Mail delivery, local residents were very vocal with their concerns. Their articulate and informed nature meant they were very engaged with their MP and Lambeth Council who they used to help elevate their concerns around construction traffic, access and the visual impact of the substation buildings. The pressure from residents was such that Lambeth Council requested we submitted a new screening request for the works despite the original application being approved.

However, alongside this we were able to put a number of measures in place to alleviate the impact of our works on the local community and to help reduce the number of complaints and queries our team were having to deal with on a daily basis. This included:

Thanks to our ongoing community liaison and mitigation measures, a new screening was approved.

During 2021, prior to construction, from January to December 2021, we received a total of 233 complaints and queries about the proposals and work, and at the peak in January we had 62 complaints and queries. This reduced to two in December relating to UK Power Networks activity on site. Despite the initial reaction from residents, we anticipated the issues and dealt with them at an early stage. We have also received no complaints about our activity since construction started last summer.

After moving the access route to through the hospital, one resident said, “Fantastic news! Well done on negotiating the ingress and egress of construction traffic through the KCH site. What a relief to know that there won’t be any increase in HGVs on our narrow residential streets. Thank you for all the hard work that went into negotiating this – all your efforts are greatly appreciated.”

We have now completed the public engagement on designs, and consultation closed at the end of February. Over the period of community engagement events, there were 224 visitors to the website, with 155 of them being unique visitors. Across all three events, we had 10 conversations via the chat feature and three feedback forms were received. We have subsequently held a further CLG and discussed our plans with local residents and we are in the process of listening and responding to their feedback before submitting our final design for the headhouse and substation in April.