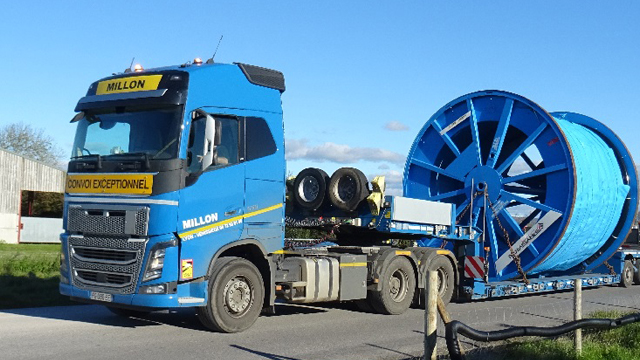 On Thursday 4 November, National Grid and Balfour Beatty engineers working on the Mendip cables stage of the Hinkley Connection Project welcomed the final delivery of cables, which will carry 400kV of electricity between Loxton and Sandford, under the Mendip Hills AONB.

The cables have been delivered on 108 separate cable drums, each weighing between 35-50 tonne and standing 5 metres high.

Les Naylor, Project Supervisor for National Grid, said: “We’re delighted to have all the cabling needed to complete the project on Somerset soil.”

Since beginning the cable pull in February 2021, the team has now pulled 85km of cable. That’s over 80% of the total of 102km (the distance between Bridgwater and Gloucester!) that will be pulled by February 2022. Once completed and the existing pylons have been removed later this year, it will be the first time that this area of the Mendip Hills has been pylon-free since the 1960s.

National Grid is often asked why so many kilometres of cable are needed when the distance between Loxton and Sandford is a relatively short 8.5km. That’s down to the design of the underground cables. To have the same electrical capability as the overhead lines that are being removed, 12 cables are required. These are divided across four cable trenches, with three cables in each trench.

The animation above explains the engineering process and what’s involved in the construction of these underground cables.