Chronic joint pain is a daily reality for Customer Service Advisor Danielle Gayle, who was diagnosed with rheumatoid arthritis in her 20’s. Despite having suffered more physical and emotional setbacks than many women her age, she stays dedicated to her role and refuses to let her disease dominate her life.

Until a few years ago, I was doing all the things you’d expect someone in their 20’s to be doing – shopping and socialising with friends, doing yoga regularly.

Then, one morning, I woke up to find I couldn’t move my arm. I thought I maybe had a blood infection, but after a trip to hospital and a series of tests the doctor told me they suspected I had rheumatoid arthritis.

Two days later, my symptoms got worse. I had chronic pain all over my body and couldn’t move my legs. I was quickly referred to the hospital’s rheumatology department and they confirmed I had the disease.

It came as a huge shock, especially to hear you have a disease that many people associate with old age. Now, of course, I know that’s a myth. Rheumatoid arthritis can affect anyone, at any age.

I was given strong drugs to manage my pain and was determined my conditions wouldn’t get the better of me. I carried on coming to work and tried to keep my life as normal as possible, but unfortunately things deteriorated.

Before long, I could barely sit down and walking was agony too. Seeing colleagues of the same age doing everything I used to, while doing the most basic tasks caused me great pain, made me feel depressed, lonely and anxious.

What I’ve learned about life is that you never know what you’re going to wake up to. So if you have a dream, my advice is not to put it on hold – you should go for it.

The lowest point came when I woke up one morning and couldn’t move at all. I had to be carried out of my house on a stretcher and taken by ambulance to hospital. When doctors x-rayed my hips, I was told they were so damaged I’d need a double hip replacement. But the waiting list for surgery was incredibly long.

I stayed in hospital for a week, and suddenly there was a breakthrough. After a cancellation, they could operate and replace my first hip right away, and the second hip was replaced two months later.

While I knew surgery was the right move, I did lose my independence for a while. My mum had to wash and feed me, and I had to learn to walk again. But things are really looking up now.

More than ever, I’m determined not to let rheumatoid arthritis take over my life. My grandma suffered from the disease and it took over her life – but I’m not going to let it beat me.

Coming to work is a great distraction. If I was at home, I’d be thinking about my swollen hands or pain in my shoulder, but at work you almost forget about it. It helps that everyone at National Grid has been so supportive. If I’m in a lot of pain, I can go to any manager and they’ll let me work from home.

I still wake up in pain, but I try to stay positive. I always think back to my lowest point and remember how far I’ve come. Ever since my surgery, I’ve been able to get more of my life back, and it’s great to feel sociable again.

What I’ve learned about life is that you never know what you’re going to wake up to. So if you have a dream, my advice is not to put it on hold – you should go for it.

Having been through some very low times, I have much more empathy for people’s mental health than I used to. People say they can’t believe how much I smile, but I want to stay positive and not be defined by my illness. 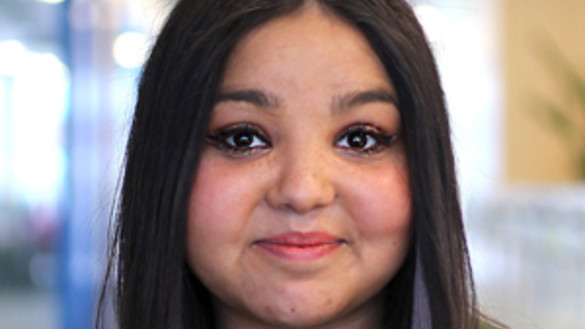