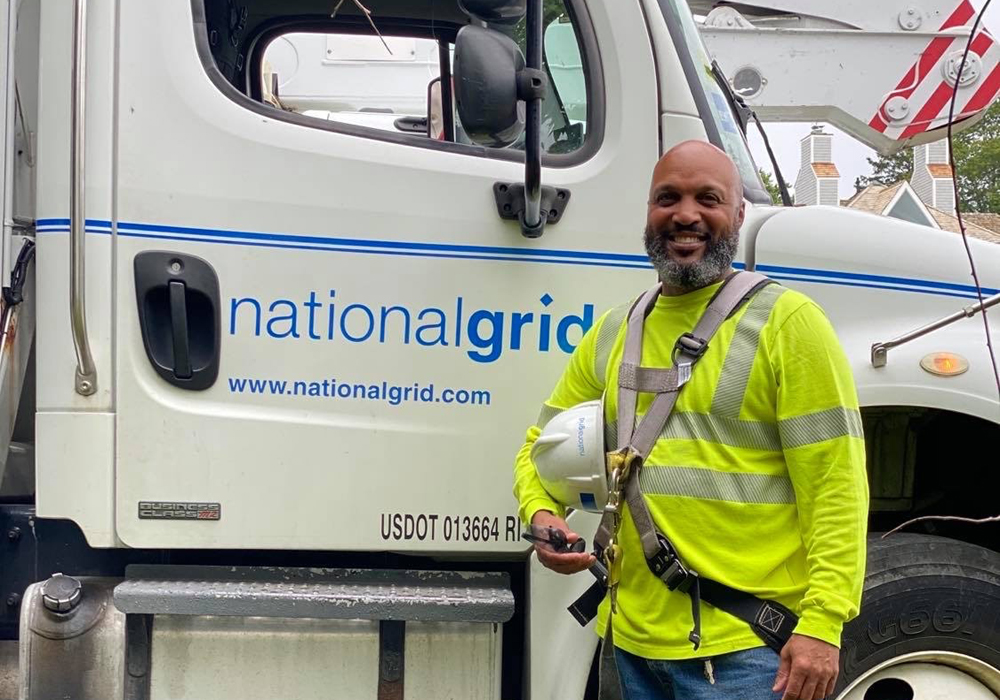 Life as a lineworker – our high wire heroes

No matter if temperatures are dipping below freezing or its broiling hot outside, Donald Lopes and his fellow lineworkers arrive at their base in Providence, Rhode Island at 7am sharp; ready to service the poles to ensure electricity keeps flowing to local homes and businesses. On National Lineworker Appreciation Day, Donald takes us behind the scenes of life as a lineworker.

Storms present the toughest challenges for lineworkers and it was during a storm that Donald experienced the worst job of his 28 years with National Grid. A tree had fallen, pulling down seven poles in a domino effect. The crews had to work to put up new poles, connecting each one to the next as fast as possible to restore power to local area.

But making sure Rhode Island residents have reliable power is the best thing about his job. “I like the satisfaction you get when you can get people’s lights back on during a storm. It’s great when they appreciate the way we’re working outside in the freezing sleet and snow, when everyone else is safe indoors. Though I will admit that, as I get older, I find working in the cold one of the hardest things about the job.”

I like the satisfaction you get when you can get people’s lights back on during a storm. It’s great when they appreciate the way we’re working outside in the freezing sleet and snow, when everyone else is safe indoors.

Donald has been with National Grid for 28 years. He started working summer jobs within the company while he was in college. He loved it so much he couldn’t wait to apply for a permanent position in the line department with the company, back in 1992. In his early years within the company, Donald completed his Associates Degree in Electrical Technology, alongside his day job. 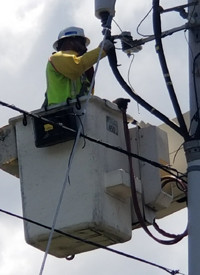 Growing a head for heights

Becoming a lineworker might not have been the most obvious choice for someone who admits he didn’t have much of a head for heights. Particularly when you consider that, back then, a lineworker spent their day climbing 40-55ft poles. “I wasn’t the most fond of climbing when I started, but when you do it every day you get used to it. Now we’re in bucket trucks most of the time, which does make it easier to deal with the heights.”

Working through a pandemic

There’s no such thing as a typical day for a lineworker, and that’s never been more true than during the COVID-19 pandemic. Normally, Donald travels from his home to his base in Providence, Rhode Island Monday through Thursday. As a crew leader, he’s the senior guy, accompanied by a First Class Lineworker, and after a safety briefing they would get their daily work duties from the foreman. They’d then stock their truck with the gear they needed, grab a coffee and travel to the work site and get on with repairing and changing poles, running wires and carrying out maintenance work. At around 3pm they’d return to base.

Since the pandemic struck, their work day starts have been staggered and, to reduce the risk of infection, there are no communal briefings. Donald’s crew has been moved to a new base at the Pontiac substation and for every job he is outfitted not just in standard safety gear, but a mask to protect against the virus.

“I thought it might be quieter during the pandemic but, if anything, we’ve been busier. We’re on call every weekend and there have been a lot of emergencies to deal with. We’ve had a lot of hit poles. I don’t know why, maybe people are driving faster on the empty roads?”

What it takes to be a lineworker

To be a successful lineworker takes a certain sort of mindset. “People see us working and they think that it’s easy and anyone could do it. But they don’t understand what it takes or what the repercussions are if we make a mistake up here. Every day we’re up there working with 7,200 volts of electricity, so you must have your head in the game. No matter what’s going on at work or home, you have to focus on your duties. You can’t go up there and have your mind on anything else.”

Every day we’re up there working with 7,200 volts of electricity, so you have to have your head in the game. 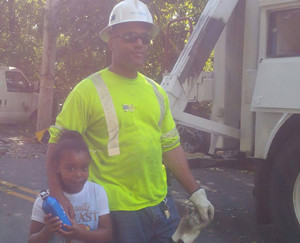 As well as his fellow crew member, Donald relies on the ground crew who are there to look after the lineworkers while they’re in the air; helping them to complete their tasks and keeping an eye out for anything that could be missed.

Pride in his work

Over the years, Donald’s had many reasons to be proud, but one surpasses them all: “I’m married with three girls and, when I’m working near my home, my wife will bring them to watch. They love seeing the trucks! I know they’re proud of me and when I go home and look at my family … well that’s when I feel proudest of what I do.”