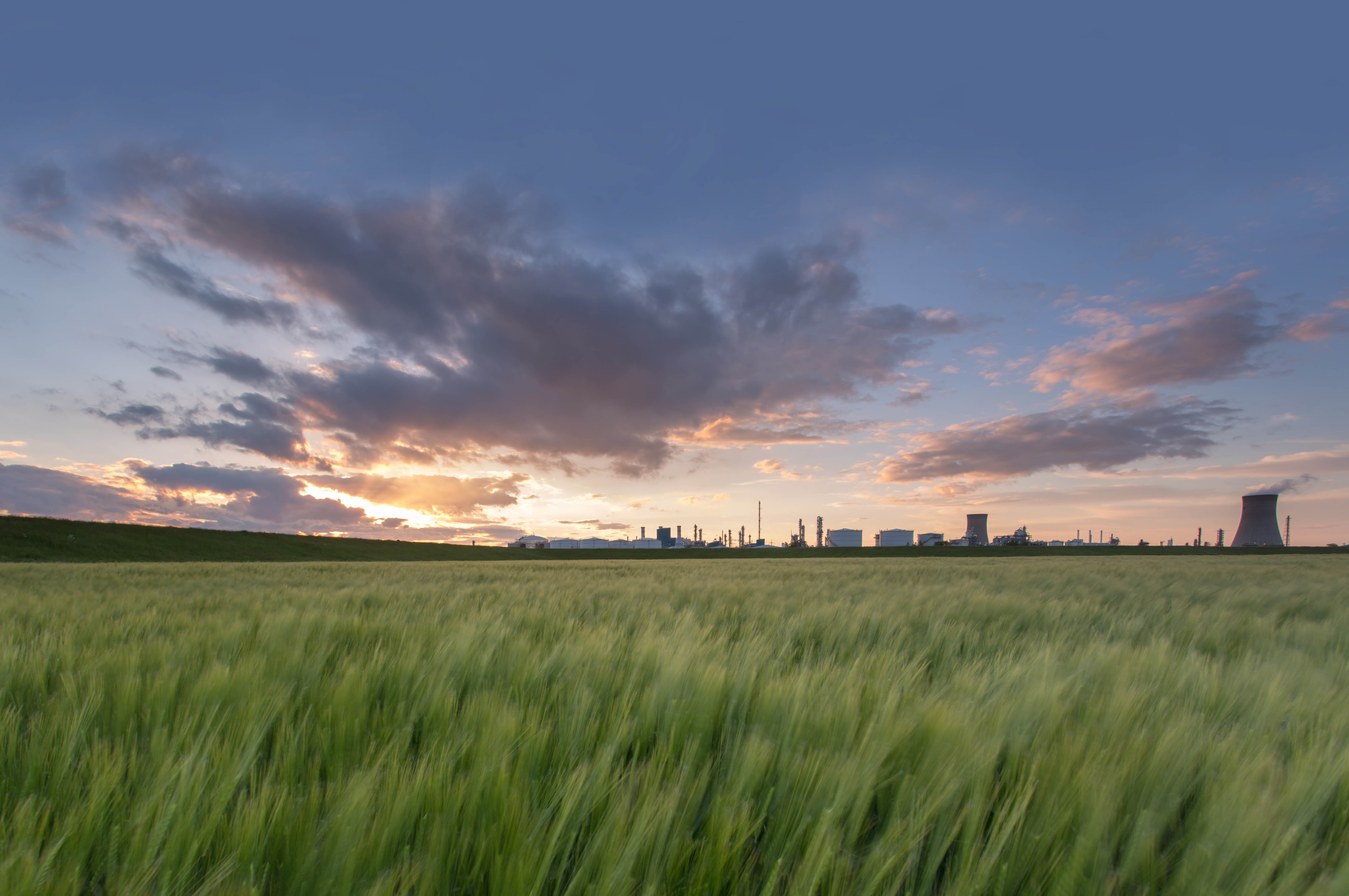 Twelve leading companies and organisations across the Humber have jointly submitted a public and private sector funded bid worth around £75 million to accelerate decarbonisation in the UK's most intensive industrial region, helping to support clean growth, future-proof vital industries and protect and create new jobs.

The scheme is enabled by shared infrastructure that includes a pipeline network to carry hydrogen to industrial customers and carbon dioxide from power generation and industrial emitters to permanent storage in an offshore aquifer below the seabed in the UK’s Southern North Sea.

Zero Carbon Humber could reduce the UK’s annual emissions by 15% and save industry around £27.5 billion in carbon taxes by 2040. It will also help to secure the future for the Humber’s traditional heavy industry and related supply chains by enabling decarbonisation and creating opportunities for growth in new technologies. It could safeguard 55,000 existing jobs in the region, whilst creating thousands of new STEM roles and developing skills, apprenticeships and educational opportunities in the area.

The ZCH Partnership has applied for funding from Phase 2 of the Industrial Decarbonisation Challenge, which forms part the Industrial Strategy Challenge Fund, with significant investment also coming from the companies within the ZCH Partnership.  The bid builds on the Humber's successful application for Phase One funding, which was announced in April.

The bid’s anchor project is the Equinor-led Hydrogen to Humber (H2H) Saltend project, which will establish the world’s largest hydrogen production plant with carbon capture at px Group’s Saltend Chemicals Park. H2H Saltend will convert natural gas to hydrogen and capture the carbon dioxide (CO2). In the first phase, this could reduce emissions by circa 900,000 tonnes per year as industrial customers switch fuel to low-carbon hydrogen and Triton Power’s gas power plant blends hydrogen into the fuel supply via its upgraded Mitsubishi turbines. H2H Saltend is expected to grow over time, contributing to further emissions reductions from the Chemicals Park and across the Humber.

A pipeline network, developed by National Grid Ventures, will link H2H Saltend to energy-intensive industrial sites throughout the region, enabling further decarbonisation as additional businesses switch to low carbon hydrogen and capture their CO2 emissions. The CO2 will be compressed at Centrica Storage’s Easington site and stored under the Southern North Sea using offshore infrastructure shared with the Teesside industrial cluster.

The bid for matched funding covers obtaining land rights, development consents and front-end engineering design for H2H Saltend and the onshore pipeline infrastructure for CO2 and hydrogen, enabling the scheme to move towards a final investment decision on construction during 2023, with H2H Saltend and associated infrastructure expected to come online around 2026.

At Selby in North Yorkshire, Drax Power Station would connect to the completed CO2 pipeline network, underpinning the ZCH scheme with bioenergy with carbon capture and storage (BECCS) – a vital negative emissions technology that Drax is pioneering and which will be essential to decarbonising the Humber Cluster and helping the UK achieve its legally binding 2050 net zero carbon target.

The pipeline network will also run via SSE Thermal’s Keadby site, where it is developing Keadby 3. This could become the UK’s first gas-fired power station equipped with carbon capture technology by the mid-2020s, providing decarbonised flexible power to compliment intermittent renewables generation and maintain security of supply. The network will also run via Immingham, where Uniper is planning to add to its European hydrogen ambitions by developing clean hydrogen production at its Killingholme site, in line with Uniper’s pledge to be carbon neutral in Europe by 2035.

As one of the UK’s leading steel manufacturers, and a significant local employer, British Steel could benefit from the ZCH infrastructure as part of its drive to lower emissions. ABP, the major ports and logistics provider for the region,  will support the global reach of the low carbon products and chemicals produced at Scunthorpe and at Saltend.

The ZCH projects are supported by the University of Sheffield’s Advanced Manufacturing Research Centre, which models the wider economic and supply chain opportunities in the UK provided by these new technologies.

In addition to the key sites that are part of the ZCH scheme, there is further potential for other future projects to attract inward investment and cement the Humber’s reputation as the UK’s Energy Estuary and a world-leading net zero region. These include integrating offshore wind power into hydrogen production, decarbonising the regional gas grid, supplying hydrogen transport fuelling hubs, providing CO2 storage services to other industrial clusters and creating the world’s first sustainable maritime refuelling port.

Jon Butterworth, Managing Director of National Grid Ventures said: “National Grid sits at the heart of the energy system, and we want to play our full role in supporting the UK’s economic recovery through innovating and investing in strategic infrastructure solutions to support a net zero future.

“The Humber region offers unmatched potential to protect and grow jobs and decarbonise the UK’s largest industrial heartland.  A key to unlocking that potential will be to deliver the transport and storage infrastructure that will incentivise industrial emitters to adopt carbon capture technology.

“We are committed to working with our partners across the Humber region, leveraging our knowledge and experience of gas and electricity transmission infrastructure, and our experience of working on previous CCS projects, to accelerate the development of CCUS in the Humber and across the UK.”

This press release can also be found at https://www.zerocarbonhumber.co.uk/news/iscf 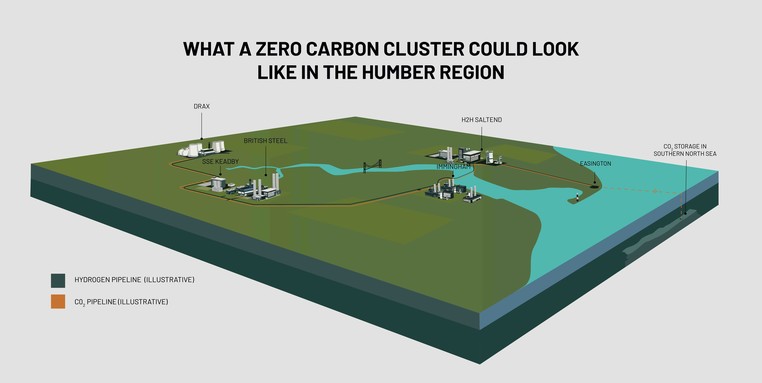 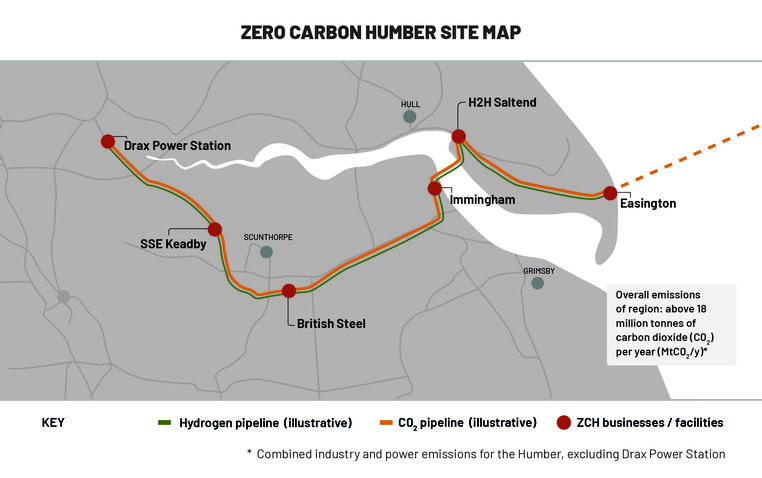 Ron Deelen, CEO of British Steel said: “We have ambitious plans to invest in a range of technologies to reduce the carbon intensity of our operations, with solutions that are globally recognised and acceptable to customers. The development of the ZCH project, with the proposed installation of a dual CCS and hydrogen supply pipeline, will afford us the opportunity to utilise a range of techniques to reduce the carbon intensity of our operations. This project complements the long-term decarbonising technology roadmap of British Steel.”


Greg McKenna, CEO of Centrica Storage said:“At Centrica Storage we own and operate the Easington terminal which processes gas from the Southern North Sea before being injected into the National transmission system. We are a partner in the Zero Carbon Humber bid as we believe this project represents a vital opportunity for the UK to decarbonise its industrial sectors with the Humber representing the largest CO2 emitting cluster in the country. Our business is experienced in delivering large infrastructure projects in the Easington area, having managed multiple third-party pipeline landings including the construction and operation of Langeled gas receiving facility which meets 20% of the UK’s gas demand. We look forward to supporting this project and the opportunity this provides for the UK to meet its net zero obligations by 2050.”

“Drax’s pioneering work developing bioenergy with carbon capture and storage (BECCS) could deliver 16 million tonnes of negative emissions a year – critical for the Humber’s efforts to reach net zero and also positioning the UK as a world leader in a vital carbon removals technology that will be needed globally to meet climate targets.

“BECCS is the most cost-effective negative emissions technology available now and uniquely – it also produces flexible, renewable electricity – demand for which will grow as the economy further decarbonises.”

“As the UK’s leading supplier of energy, Equinor has been contributing to reducing emissions from power with our natural gas and offshore wind. The H2H Saltend project at the centre of this bid will both demonstrate the value of hydrogen and carbon capture across the wider energy system, and unlock the transformation of the Humber into the UK’s largest and greenest industrial cluster.

“We and our partners will continue to progress our proposals, working closely with key stakeholders. Together we can make the Humber and the UK the environmental standard bearer that the world can learn from.”

“Combined cycle power plants are currently the UK’s largest flexible power source and converting gas turbines to burn hydrogen will allow for a deep decarbonisation of the UK power sector while providing reliable and clean power to the grid. Zero Carbon Humber is a monumental step towards 100% hydrogen gas turbine operations which we are working towards.”

“Saltend Chemicals Park, in the UK’s Energy Estuary, is perfectly positioned to be a key driving force behind the UK’s switch from fossil fuels to cleaner, greener, energy - a national priority.”

“Saltend Chemicals Park is already home to several world-class chemicals and renewable energy businesses.  Integration and connectivity creates synergies and innovation within the park cluster. We're looking forward to achieving the same with all the partners involved in the H2H Saltend and Zero Carbon Humber ISCF bid.”


Stephen Wheeler, Managing Director of SSE Thermal said: “We know the Humber has the potential to lead the way in the UK’s transition to a net-zero future, and it’s essential we’re working together across the various industries in the region to turn this vision into a reality. For SSE Thermal’s part, we’re looking to develop a clean power hub for the region in North Lincolnshire, with Keadby 3 as the UK’s first gas-fired power station equipped with carbon capture and storage technology. Through the development of shared CCS and hydrogen infrastructure, the Zero Carbon Humber Partnership can help drive a clean industrial revolution across the Humber and wider regions, stimulating billions of pounds in private investment and supporting thousands of high-quality jobs.”


Mick Farr, President and Chief Operating Officer of Triton Power said: “Triton Power is delighted to support the next step of the energy transition. Our combined heat and power business at the Saltend Chemicals Park is integral to the ISCF bid and the H2H project. We have an experienced team, flexible assets and the technology necessary to make the fuel switch to hydrogen. We are proud to be part of the collaborating team where we have seen real engagement and a ‘can do’ spirit between partners. As a northerner, being able to deliver a compelling opportunity for our region that will have both local and national lasting effects is immensely satisfying and I really hope that this vision is transparent to government.”

“Uniper supports the aims of the Zero Carbon Humber project; we see the infrastructure as a key enabler for our plans to develop clean hydrogen production at our Killingholme site to contribute to decarbonisation and employment in the region.”.


Ben Morgan, Research Director of University of Sheffield’s AMRC said: “We are excited to be part of the Zero Carbon Humber project. Bound by a common objective of reducing carbon emissions across Yorkshire and the Humber we bring to the project a wealth of experience in advanced manufacturing innovation and supply chain development. As part of the High Value Manufacturing Catapult, we have strong partner networks and proven supplier engagement models which will enable the ZCH project to anchor large sections of this nascent industry supply-chain in the UK. This in turn will provide long term sustainable wealth and support levelling up of the UK economy.”