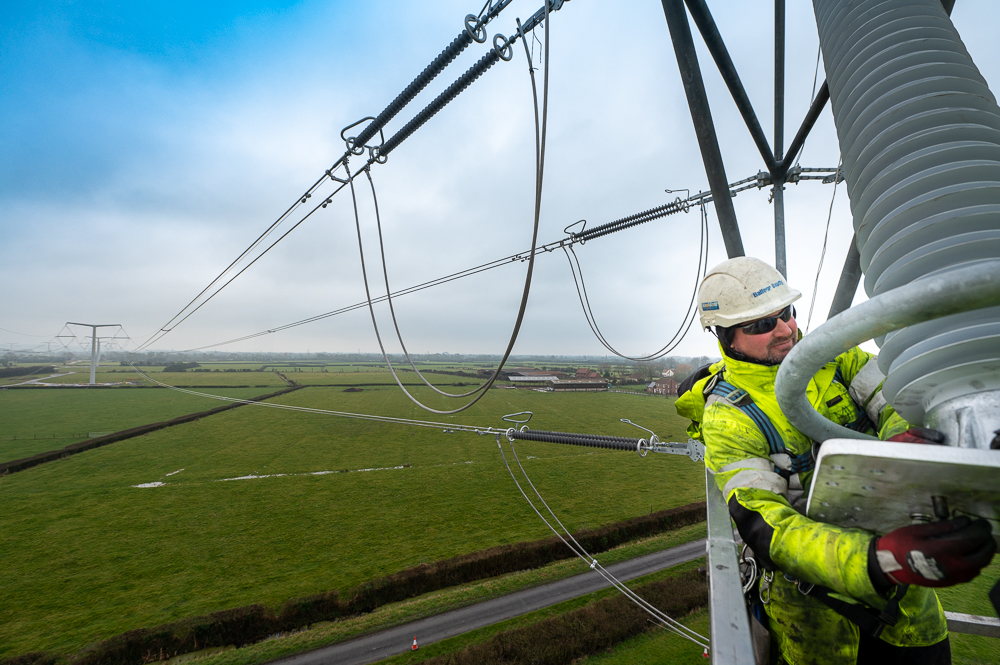 Wires to carry low carbon energy onto the UK electricity network have now been installed on 36 of the Hinkley Connection Project’s new T-pylons in a process known as ‘stringing’.

T-pylons are an innovative new pylon for overhead electricity lines. They have a single pole and T-shaped cross arms, which feature suspension diamond insulators – like ‘earrings’ – which hold the wires, or conductors. 48 of the T-pylons have now been constructed between Bridgwater and Loxton in Somerset and engineers have been putting in place the conductors that will carry the low carbon energy onto the electricity network.

The conductors are transported to site on large drums, weighing up to 7.5 tonnes and 2.5m high. Teams of engineers first pull a steel braided rope between sections of up to 12 T-pylons through circular running blocks suspended from the diamond-shaped insulators. The heavier conductors are then attached to the rope via a rectangular headboard, which is then pulled back through the running blocks using large winches. Engineers control the speed of the winches to guide the conductors into position before they are fixed to the insulators.

T-pylons form part of a suite of technologies and approaches to mitigate visual impact, including alternative lattice pylon designs and different types of underground and subsea cable systems – with each approach chosen where it’s operationally possible and cost efficient for electricity consumers.

The span of cables between each T-pylon is up to 360m and the conductors are installed in sections of up to 12 T-pylons at a time, with each section taking around two weeks to ‘string’.

There will be a total of 116 T-pylons along the route. Construction work has begun on the remaining 68 T-pylons on the northern section of the route between Sandford and Portbury. Those will be completed, including stringing, by 2023.

The Hinkley Connection stretches 57 km from Hinkley Point C to Seabank power station. It's made up of sections of traditional lattice pylons at Shurton and Avonmouth and 116 new T-pylons, with a section of underground cable between Loxton and Sandford running under the Mendip Hills Area of Outstanding Natural Beauty.

The Hinkley Connection Project will be ready to connect six million homes and businesses in the South West and beyond with low-carbon electricity generated by Hinkley Point C and other sources of low-carbon energy in 2024.

James Goode, Project Director for National Grid Electricity Transmission said: "We’re immensely proud to have reached this significant milestone on the Hinkley Connection Project. National Grid is at the heart of the transition to net zero and the conductors we are installing today will carry low carbon electricity onto the network for millions of people across the UK to use for years to come.

"The Hinkley Connection Project will be ready to connect six million homes and businesses in the South West and beyond with low-carbon electricity generated by Hinkley Point C and other sources of low-carbon energy in 2024, with the project complete, including reinstatement of the land, by the end of 2025."

Liam Cave, Operations Director at Balfour Beatty, said: "We are delighted to have reached this critical milestone – a landmark moment taking us one step closer to safely and successfully delivering low-carbon electricity to millions of homes and business in the UK.

"Alongside National Grid Electricity Transmission, we will continue to utilise our unique capability and extensive expertise in major, complex overhead line schemes as we turn our attention to reaching full energisation later this year."

Ofgem has approved National Grid’s request to make early payments to consumers of £200 million over the next two years as part of the regulatory regime for electricity interconnectors.