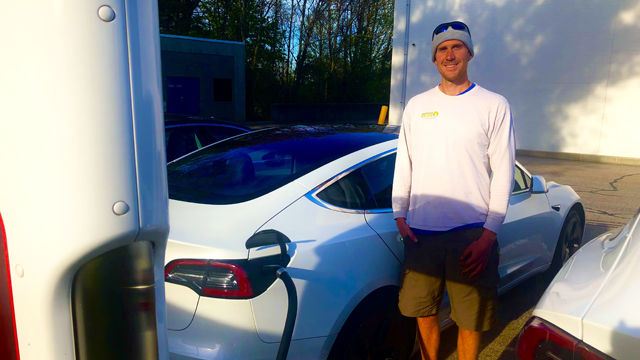 Hundreds of electric vehicle (EV) drivers in Rhode Island are saving money and boosting the efficiency of the electric grid, thanks to the novel SmartCharge Rhode Island program, which is changing drivers’ behavior.

Launched two years ago, the initiative allows National Grid to study the charging behaviors of EV drivers across the Ocean State. SmartCharge participants earn $50 annually for signing up, activating a monitoring device in their vehicle and charging their vehicle within National Grid’s service territory.

Going a step farther, the planning designers decided to offer some participants additional motivation for charging their vehicles at off-peak times – from 9pm until 1am – to study whether incentives would sway drivers’ charging behavior. The group was presented with prices of $0.06 per kWh from June to August and $0.04 per kWh for the remainder of the year.

After a year of study, all participants (roughly 300) were offered the additional off-peak charging incentives. It’s now been two years since this pilot launched and there’s good news to report. Seventy percent of EV drivers have shifted their behavior and are now charging during off-peak hours.

National Grid is happy to reward smart charging behavior like this, by offering discounted rates for off-peak charging.

“This is a really positive sign that our SmartCharge Rhode Island (RI) drivers are taking advantage of electricity overnight, when most of us are asleep and when it’s cheapest and cleanest,” said Ryan Cote, program manager for electric transportation. “National Grid is happy to reward smart charging behavior like this, by offering discounted rates for off-peak charging.”

Reducing strain on the grid

Time matters when it comes to the actual cost to the grid of bringing power to customers. When demand for power is high, overall energy costs are higher (known as peak demand). For example, on a sweltering July day, when consumers are running their air conditioners all day, there is greater demand on the system for more load. By incentivizing EV drivers to shift their charging to off-peak times, it reduces peak demand and strain on the grid.

Allison Archambault, who works at Rhode Island’s Department of Environmental Management, was an early adopter of the SmartCharge RI program. When she bought her Chevy Volt in 2017, her commute from West Greenwich to Providence was roughly a 25 miles roundtrip. Her employer has an EV charging station that tended be crowded during the day. However, when she participated in SmartCharge RI her habits changed.

“The SmartCharge RI program has been really beneficial,” Allison said. She earns an estimated $5 back monthly from National Grid when charging during off-peak hours and that goes into her PayPal account. Since the pandemic, Allison’s been working from home and plugs her EV into a wall socket that can charge her Volt.

She’s also enjoyed educating her husband about the SmartCharge Rhode Island program. “It was fun letting him know why we are plugging my EV in at night and why we should charge at the off-peak times because it’s less of a burden on the grid.”

Allison says she’s always been environmentally conscious and has always looked for individual ways to reduce her carbon footprint. “I even have an app on my phone that shows me when the energy prices go up and down, so I can track it. I also think the SmartCharge program offers the ability to have conversations with people about the benefits of charging at off-peak times, which benefits not just EV owners but all consumers of electricity.”

…the SmartCharge program offers the ability to have conversations with people about the benefits of charging at off-peak times, which benefits not just EV owners but all consumers of electricity.

Brad Peterson is another participant. “My experience with SmartCharge RI has been great. I wanted to take part and I’m saving a little bit of money and helping National Grid gather data about EV charging,” he said.

Brad lives in East Providence and has been taking part in the program for two years. He too has changed his habits and now charges his EV at off-peak times. “National Grid made it easy to take part; they gave me a device that’s the size of a deck of cards, which sits behind the center consul of my car, and that captures all the charging data.”

Being able to engage with more than 300 drivers in the SmartCharge RI program has allowed National Grid to glean critical insight into its charging behavior and the effectiveness of price signals to incentivize off-peak charging of EVs.

“Reimagining the roads in the transportation sector is vital to delivering the region’s clean energy goals,” said John Isberg, Vice President of Customer Solutions at National Grid. “With more Rhode Islanders recognizing the critical role of EV’s in the transformation to clean energy, we need to ensure we’re prepared for more people who choose to get behind the wheel of EVs.”

Since 2018, we have installed 278 charging ports in Rhode Island. In addition to serving a wide swath of customers and communities, the focus has also been on: economically disadvantaged areas; apartments and condominium complexes; public transit buses and school buses; private and public electric fleet vehicles; and, fast charging stations close to major travel corridors. Over 40% of the greenhouse gas emissions in the Northeast come from transportation. That’s risen 13% since 1990, while overall carbon dioxide has declined by 23%.