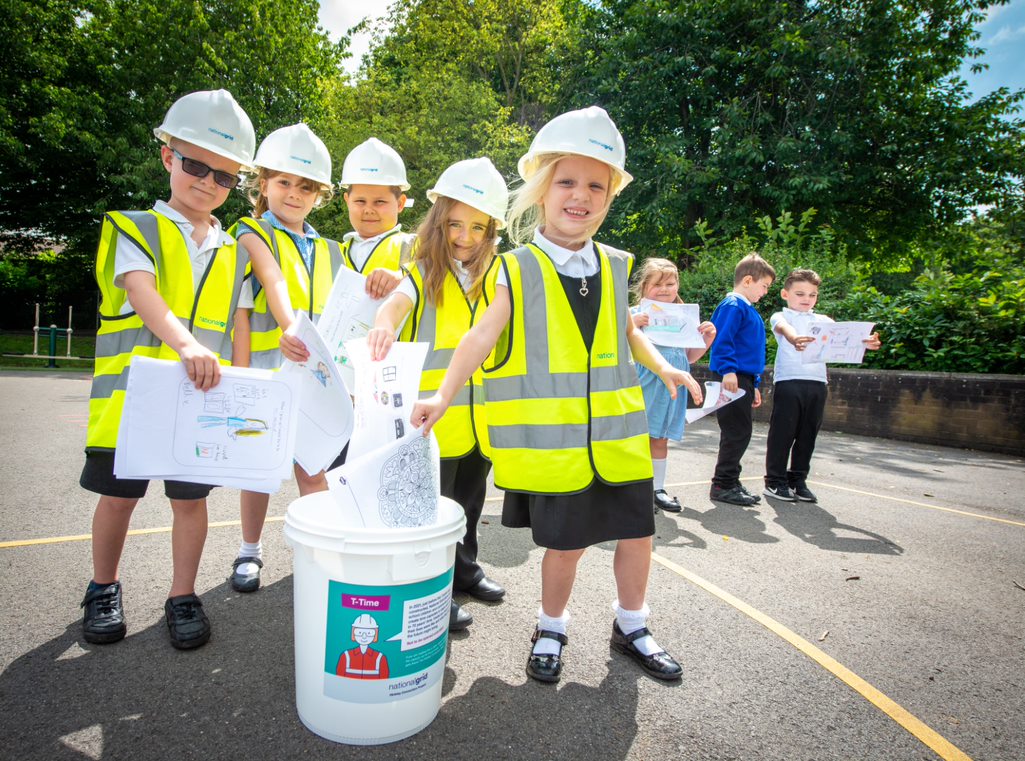 To mark the construction of the world’s first operational T-pylons from September this year, children from schools closest to the Hinkley Connection route have been preparing time capsules to be hidden inside the new structures.

Woolavington Village Primary School, East Brent CofE Academy and East and West Huntspill Academy pupils were amongst the first to present their completed capsules to National Grid engineers last week and learn about how the T-pylons will be constructed.

Time capsules from 20 schools will be prepared to fit inside some of the 116 T-pylons along National Grid’s 57km Hinkley Connection route. It’s the first new design for a UK electricity pylon for almost a century and when completed in 2026 the route will connect low carbon energy from EDF’s Hinkley Point C power station to six million UK homes and businesses. It will also allow for more capacity on the network for renewable energy from the South West peninsular.

The operational life of the 35m tall new T-pylon, which is smaller and takes up less land than traditional 400kV pylons, is around 70-80 years. The children hope whoever removes them in several decades’ time will have snapshot of what life was like for them in 2021.

Among the items sealed away to be unearthed years from now are lego figures, class photographs and video messages, school uniforms, plus Covid face masks and lateral flow tests – a huge part of life in 2021.

These sit alongside children’s ideas about how we will use energy in 2091, including designs for houses of the future.

Chelsey Dover, Year 5 Senior Teacher and English Leader at Woolavington Village Primary said: “We’ve really enjoyed being part of this project.  Some of the construction works are near to Woolavington so it’s been brilliant for the children to understand more about the T-pylons and why they are being built.  Some pupils commented that they think the design looks really futuristic – it’s exciting for them to know their time capsule will go inside one of them!

Joanne Brayley, Head of School at East Brent CofE Academy said: “The project really captured our children’s interest.  Our children loved getting involved, imagining what life might be like in 70 years’ time and deciding on what to share with future generations. Our children also loved learning about the new T-pylons and why we need them, as well as where energy is produced and how it gets to homes.  I think we even have lots of budding engineers now! Thank you for letting us be part of something very special at the end of a very different year!”

James Goode, Project Director for National Grid’s Hinkley Connection Project said: “The Hinkley Connection Project is not only vital infrastructure and a key part of the transition to net zero, but it will hopefully inspire the next generation of engineers too. We’re delighted the children have taken part in creating their own time capsules, it’s exciting to hear their views of how energy will change in their lifetime as we head towards a cleaner, greener future.”

Later this year, some of the children will be able to attend a special event to see the time capsules securely placed inside the stem of the T-pylon and unveil a plaque with the school name on the exterior. Schools have also been presented with a model T-pylon to display as a lasting memory of their involvement in the world’s first T-pylon project."