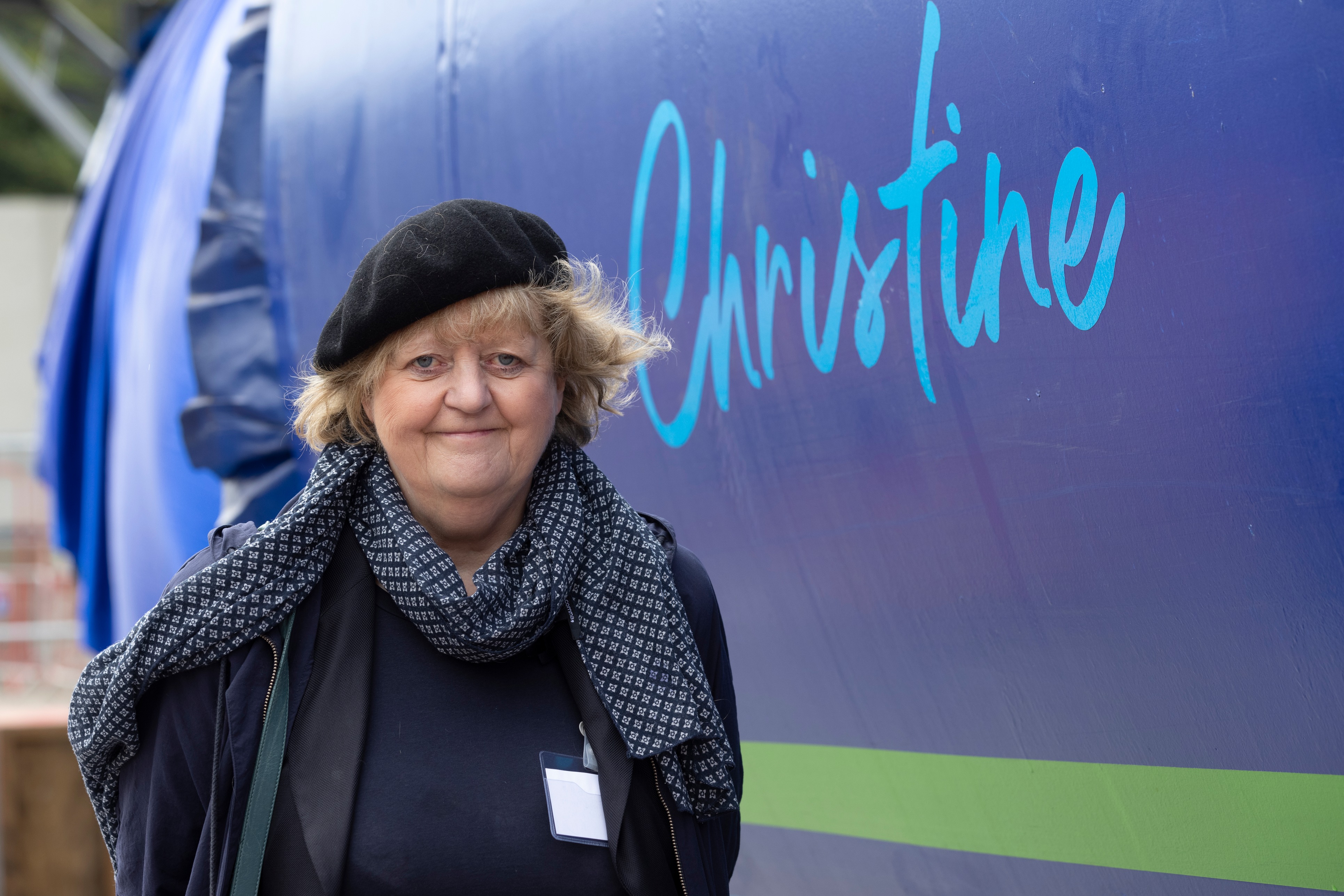 National Grid held an event at Hurst today to mark the beginning of a major journey deep underground for ‘Christine’, a tunnel boring machine (TBM), weighing around 140 tonnes. ‘Christine’ will help to construct 32.5km of tunnels below South London as part of the pioneering London Power Tunnels programme – a £1billion project to rewire the capital. Today’s event showcased the great feats of engineering involved in the London Power Tunnels Project and celebrated the hard work of its team, National Grid alongside joint venture partner HOCHTIEF Murphy, who have ensured that this vital infrastructure project continued safely despite the pandemic.

The TBM was named ‘Christine’ after guest of honour at the event, Christine Townley. Christine, who formally inaugurated the machine, was chosen for her role as a distinguished figure in the construction industry. She is committed to championing diversity and bridging the gap between disadvantaged communities and careers in construction – aspirations also shared by National Grid and the focus of its own schools’ outreach programme with social enterprise, MyKindaFuture, which will look to work with 100,000 pupils from some of the most deprived secondary schools in South London over the next five years.

Since its launch last September, despite the pandemic, National Grid has delivered a Science, Technology, Engineering and Mathematics (STEM) and careers outreach programme to nearly 19,000 secondary school students. This includes engaging with over 600 pupils at Bexleyheath Academy, less than 3 miles from the London Power Tunnels site at Hurst. Whilst many of the activities, such as workshops and presentations have been forced online, the need for the programme has never been stronger. The economic effects of COVID-19 have caused gaps in social mobility to widen, and school closures have led to greater inequalities in accessing education re­sources. Pupils have needed National Grid’s help more than ever with careers support, advice and resources to enhance their education.

Gareth Burden, Project Director, London Power Tunnels, National Grid, said: “Today marked another milestone for the London Power Tunnels project which is picking up momentum as we connect our sites across South London. It was a great privilege to host the inspiring Christine Townley and all our guests at today’s event and talk about our investment in the local community through our partnership with MyKindaFuture. The programme is part of our ambition to address the lack of social mobility across the UK and the resulting skills shortage in STEM orientated industries, which has been a core part of Christine’s work.”

“This project is essential for securing London’s electricity supply well into the future, and this has meant adapting and working throughout the COVID-19 pandemic. I would like to thank all the staff at the site again for their efforts in ensuring that the project continued to go ahead despite a global pandemic.”

Christine Townley, Former Executive Director of Construction Youth Trust: “I am so honoured and flattered that the London Power Tunnels project has named its TBM after me in recognition of my commitment to skills and diversity in construction. My late father would be chuffed. I’ve been lucky to support some amazing organisations throughout my career and particularly revelled in leading the Construction Youth Trust, developing its programmes and helping it clean the windows between young people, their communities and construction.”

“The Covid pandemic has not helped our young people – some lost their jobs and others just never got a start. It is projects like National Grid’s London Power Tunnels and their fantastic work with organisations like MyKindaFuture that have really helped in inspiring young people and their communities to understand what the world of construction and infrastructure can offer them in jobs and careers and give them hope.”

“Bravo to all those involved who, during these tough times, have ensured that they continue to support the communities in which they are building critical infrastructure. I’m excited to see what the future holds for London Power Tunnels.”

London Power Tunnels represents a significant new infrastructure project connecting a network of new electricity cables capable of powering approximately 500,000 kettles, between Wimbledon and Crayford and follows the success of the original London Power Tunnels project, north of the Thames. Construction began with our joint venture partner HOCHTIEF Murphy in March 2020. At the London Power Tunnels Hurst site, the TBM arrived on site on 5July and will be lowered into the shaft at a depth of 35m, equivalent to around three London buses, to start tunnelling towards Crayford in the next few weeks.