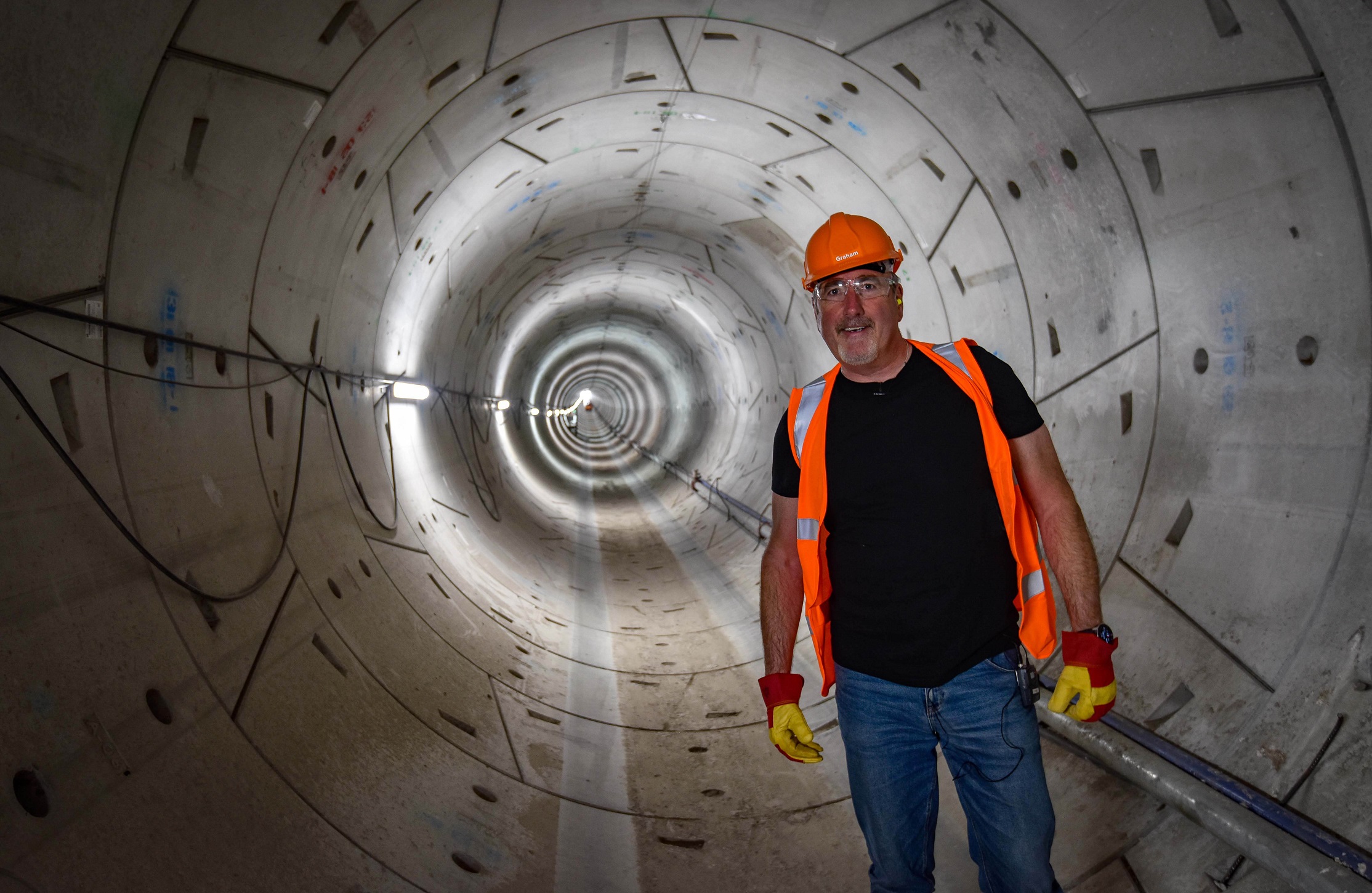 Humber bids farewell to ‘Mary’ ahead of world record bid

After completing an incredible first – digging a tunnel 5km from Goxhill in North Lincolnshire to Paull on the north bank of the Humber - National Grid and project partners Skanska, PORR and AHak have bid a fond farewell to ‘Mary’, the 160m long tunnel boring machine.

Following her epic breakthrough at Paull on 10 September, she has been carefully dismantled and lifted to the surface ready to be shipped back to Germany to be fully refurbished ready for her next tunnelling challenge.*

For the last 18 months, she has been steadily making her way from Goxhill on the south side of the river to Paull on the north bank, constructing a tunnel nearly 5km** long and a 3.65m diameter, ready to carry a vital pipeline which can provide up to a quarter of Britain’s gas supplies.

During her journey under the Humber, ‘Mary’, the size of approximately 11 double decker buses in length, excavated approximately 160,000 tonnes of material – mostly chalk, which has been carefully transported back to the surface, graded and re-processed at the Goxhill slurry treatment plant. The excavated material is being used to help restore a former quarry nearby.

Now dismantled and on her way to be refurbished, the three largest front sections made their way through Paull village towards King George Dock on Wednesday 9 and Thursday 10 October 2019.

Steve Ellison, Lead Project Manager, Capital Delivery, for National Grid, said: “Completing the tunnel beneath the Humber is a major milestone for the project team and our project partners.  It’s the first time a tunnel has been constructed beneath the River Humber and a fantastic achievement for everyone involved.

“Mary has completed a fantastic feat of engineering and it’s great to see her on her way back to Germany where as much as possible will be refurbished and renewed to get her ready for her next tunnelling job.

“The next steps for us here under the River Humber involve clearing the pipes, cables and ancillary equipment that has been servicing the tunnel boring machine and preparing for the world record breaking pipeline installation early next year.”

In Spring 2020, two hydraulic thrust machines will start the epic task of carefully pushing eight huge 610m long and 850 tonne sections of pipe on rollers into the new tunnel from the Goxhill side.  The pipes will be pushed at about one metre per minute into the tunnel which will have been flooded with water to aid installation.

When one pipe section has been installed, the next will be moved into position, welded to the one in front, and the push will continue until all 5km of pipeline is installed beneath the river.  When complete it will be the longest hydraulically inserted pipe in the world – a truly incredible feat of engineering for National Grid and its project partners!

For videos and images, of the River Humber Pipeline Replacement Project, please click on the link. http://riverhumberpipeline.com/resource-centre/ (view in google chrome).

*B roll footage, new interview and pics of Mary being lifted out of the construction shaft are available via link above.

If local residents have any further questions about the project, they can contact National Grid’s Community Relations team on 0800 988 9144 (lines open 9.00am – 5.00pm Monday – Friday), by email at [email protected] or by free post at FREEPOST NATIONAL GRID, RH PIPELINE PROJECT.