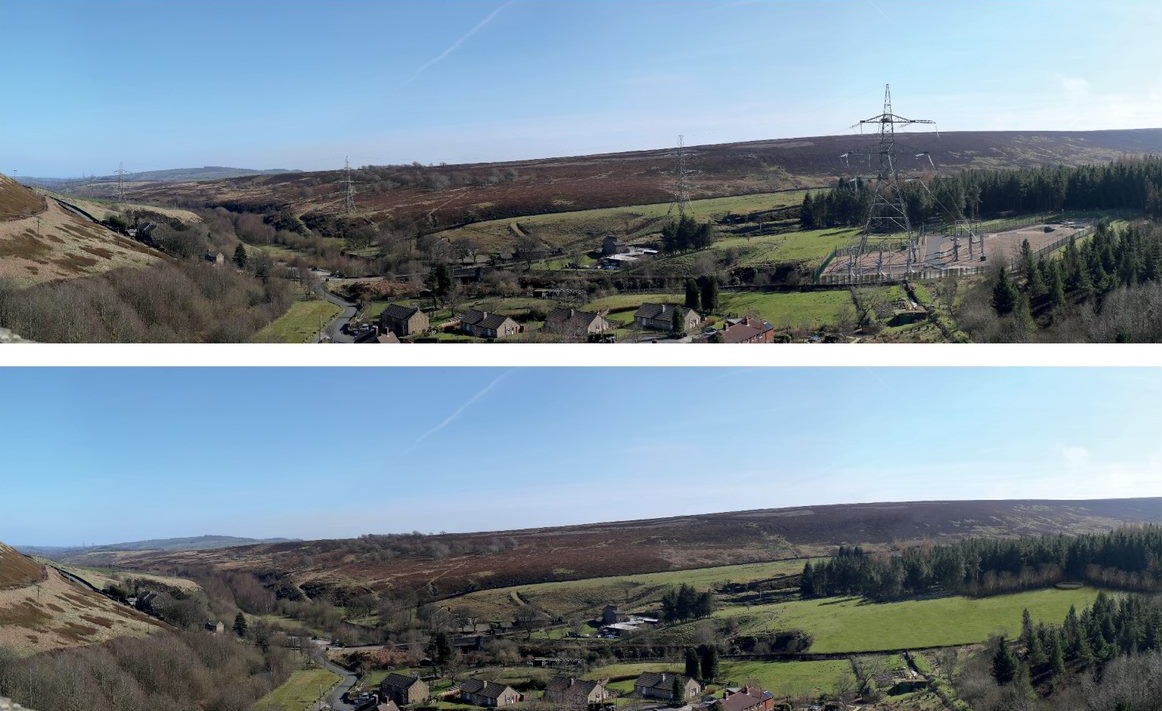 Construction work has begun on a landscape enhancement project to remove seven pylons and 1.5km of overhead electricity line that is set to transform views in the east of the Peak District National Park.

The project will require major engineering works to place electricity cables underground, allowing the pylons to be removed and significantly enhance the landscape and views in the village of Dunford Bridge.

The work is part of National Grid’s Visual Impact Provision (VIP) project*, which is a national stakeholder-led programme to reduce the visual impact of existing high voltage power lines in Areas of Outstanding Natural Beauty and National Parks across England and Wales.

The first phase of construction work that starts in May 2021 will see the creation of a new temporary diversion of the popular Trans Pennine Trail (TPT) along the Upper Don Valley.

Once completed and opened in the autumn, this will allow National Grid’s engineers to temporarily close to the existing TPT for around 1.5km from Dunford Bridge and install the new underground cables. After these have been connected, the first pylons are due to be taken down permanently in summer 2022.

Stakeholders have been at the heart of the project throughout. The area was originally chosen from a list of more than 100 possible sites by a national Advisory Group chaired by environmentalist Chris Baines and including organisations such as the National Trust, CPRE and the Ramblers.

The scheme, which is in Barnsley borough, has been designed and refined with the advice and feedback of local experts and community representatives including from Barnsley Council, the Peak District National Park Authority, the Trans Pennine Trail Office, Natural England, Yorkshire Wildlife Trust and Dunford Parish Council, as well as from members of the public.

Chris Baines, chair of the national Stakeholder Advisory Group which has overseen the development of this, and the three other VIP projects commented: “This is one of the most exciting projects I’ve ever been involved with and will transform an area I grew up in and have great affection for.

“It has been a fantastic example of a major developer working with local stakeholders, listening to their views and adapting the project accordingly. The result will turn the area around Dunford Bridge into a wonderful eastern gateway to the National Park and will enhance the enjoyment of the millions of locals and visitors who come to the Peak District every year.”

Chris Carr, Project Manager at National Grid said: “We’ve really enjoyed working closely with the local community over the past few years and have listened to feedback as we’ve developed our proposals. Having secured planning consent last summer and completed our preparation work, it’s now time for us to get started on this unique project.

“Between now and early 2023 we’ll be working with our appointed contractor Morgan Sindall to safely install the underground cables and transform the classic Dark Peak landscape. It’s a significant engineering challenge, but we will be minimising our environmental impacts as well as any disruption to local communities wherever possible.”

To help accommodate construction, alterations are being made to the Dunford Bridge car park, which will see a significant reduction in the number of spaces available for parking. Visitors and Trans Pennine Trail users are being advised to use alternative signed parking and asked not to park on grass verges in the village if the car park is full.

For more information about the VIP project in the Peak District and to keep up to date with the latest activity, please visit: peakdistricteast.nationalgrid.co.uk

For media information only

Image is a view from Winscar Reservoir, with artists impression of the area with and without pylons.