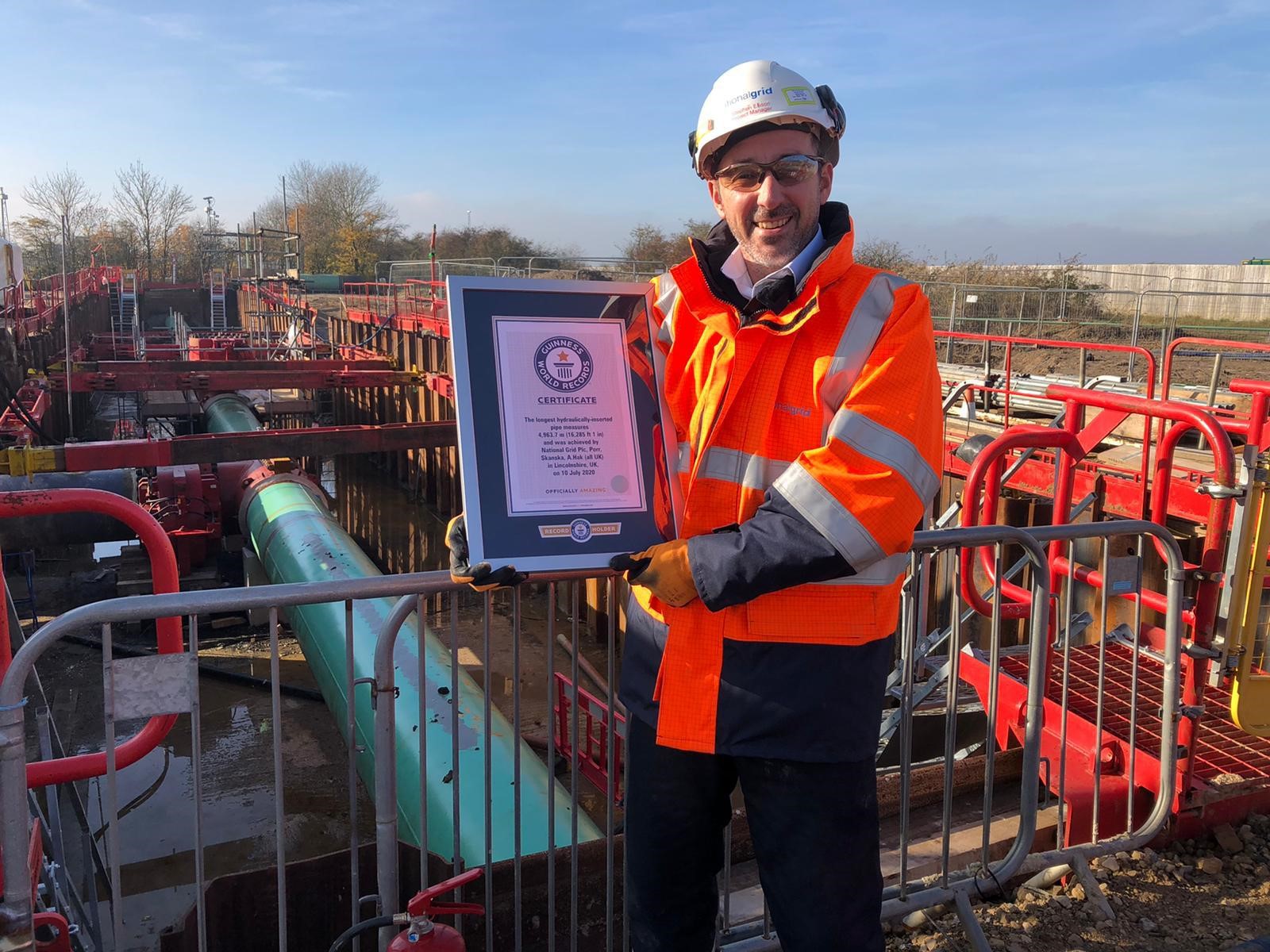 A ground-breaking project to replace a vital section of gas pipeline beneath the Humber Estuary has set a new world record.

After the successful completion of the first tunnel beneath the Humber Estuary, the second stage of the project involved flooding the tunnel with specially-treated water before pushing the pipe through in July this year.

Once the pipeline had been inserted, it was verified by the Guinness Book of Records, which confirmed at 4.96km, it had become the world’s longest hydraulically inserted pipeline.

The certificate was handed over late last week in a virtual ceremony between the Guinness World Record adjudicator and senior representatives from National Grid and joint venture project partners Skanska, A.Hak and Porr.

Emma Ford, Head of Gas Construction for National Grid said: “I am honoured to be leading a team that has made such a fantastic achievement. Delivering a project, which is of such importance for the gas transmission network, is a super achievement, especially when the project has such a good safety record of no lost time injuries in more than 500 days of working. Therefore, to achieve a world record is the ‘icing on the cake’”.

George Zondagh, Project Director for the Construction JV of Porr, Skanska and A.Hak, said: “The combination of the partners expertise in the diverse fields of tunnelling, civil and pipeline forms the basis of a team that could work together to deliver such a crucial infrastructure project. The breaking of a world record is evidence of the commitment of all those involved that have made this challenging project a reality”.

Overall, gas makes up 40% of the power consumed in the UK; heating more than eight out of ten homes and providing more than half of the energy needs of UK industry.

The pipeline has the potential to play a big role in the future as National Grid works hard to explore how cleaner alternatives of hydrogen and biogas can be used on the gas network, helping the country hit its net zero carbon target by 2050.

The pipeline is now being connected to the network, ready for gas to begin flowing in December, securing the supply of up to 25% of Britain’s gas during the winter months.

The first stage of the Humber project was completed in September 2019, which involved drilling a 3.65m diameter tunnel beneath the estuary to enable the pipeline to be installed. The drilling machine was named ‘Mary’ after Mary Fergusson in a competition amongst local schools. Fergusson was the first female Fellow of the Institution of Civil Engineers and was educated in the area.

A special ‘walkthrough’ event was held to mark the milestone, which involved local mayors, stakeholders and employees crossing beneath the river from one end of the tunnel to the other.