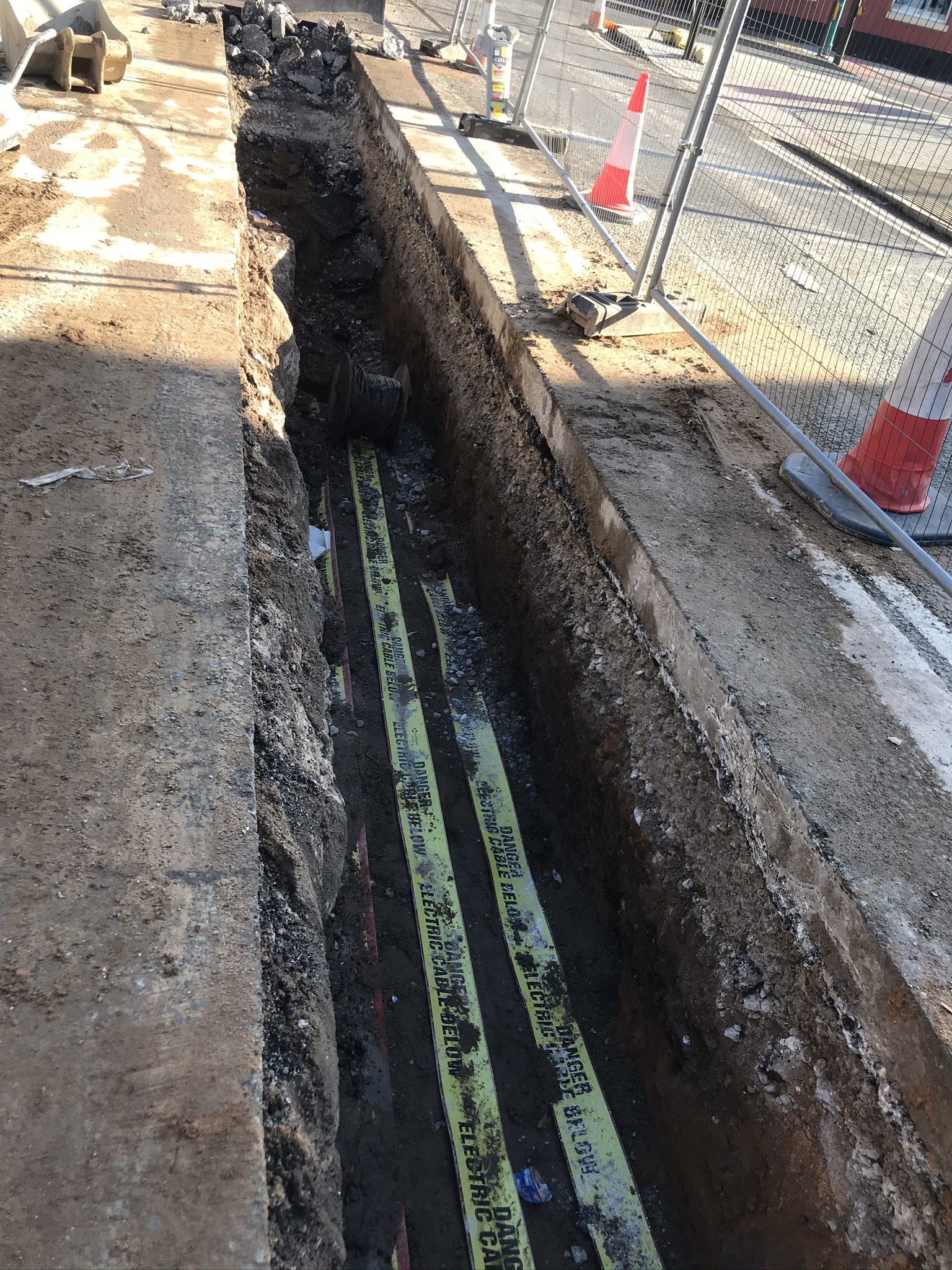 National Grid will later this month take delivery of 95 tonnes of new underground cable which will run beneath Stockport. The new cable replaces the existing 60-year-old cable which connects the pylons beside Penny Lane, off Lancashire Hill, and at the Trans Pennine trail, behind Powerleague, in Heaton Mersey.

The milestone stage in the project follows an eight-month long phase of works which has seen National Grid install more than 13km of ducting across the Stockport area. It’s taken the team more than 65,000 hours to dig 2.7km of trenches, install the ducting, infill around the trench and reinstate the ground above.

The £20 million scheme will help to keep the transmission network in first-class working order and help meet future electricity demands.

Starting at the pylon beside Penny Lane, the new 275kV cable will be pulled through the ducts which run beneath Heaton Norris, towards the A6 Wellington Road, via Bowerfold Open Space and Didsbury Road, and resurfaces behind Stockport Powerleague.

“The cable delivery and installation are a real milestone and represent the culmination of many years work. As many members of the community who came along to our information events last year and who’ve spoken with us while we’ve worked in their area will know, it’s been a complex job – Stockport is a busy area with lots of houses, roads to cross, the railway line and many existing underground services, all of which we’ve tried to avoid.”

It will take National Grid’s contractors, Morgan Sindall, around a month to pull the cable through the ducts. The cable will be pulled from three ‘joint bays’ across the route in Heaton Norris Park, Higher Bury Street and off Green Lane. Before pulling the cable, the team will set-up scaffolding around the joint bays with sheeting to provide weather protection. Expert engineers will then carry out the work to join the lengths of cable.

While National Grid works on the cable it will need to close the footpath at Penny Lane, part of the National Cycle Network (NCN62) and Trans Pennine Trail. It may also need to briefly close the Craig Road passageway, beside the Co-Op on Didsbury Road.

After the cable has been pulled through the ducts and the joints made, National Grid’s work will move to the pylons. Engineers will work at the two pylons, at Penny Lane and beside Stockport Powerleague, to connect the new cable. This phase of work is expected to start in early October and finish around mid-December 2020.

Kevin added: “We’ll keep neighbouring residents informed when we’re in their area and we’ll advertise any footpath closures in advance. We’d like to thank residents for the patience and understanding they’ve shown us so far. Although we’ve got a lot more work to do before the cable is ready to be commissioned and starting to supply electricity to the area, this stage of works is the last phase that will be as visible to the wider community. From next year our remaining work will be within Bredbury substation.”

Construction work started on the project in November 2019, and as a critical infrastructure project has continued throughout this year. It’s expected to complete in December 2021. The work won’t affect electricity supplies in the area.

People can find out the latest project information on the National Grid website at www.nationalgridet.com/bredburycable. Anyone who has questions or would like to know more can contact National Grid’s Community Relations Team on Freephone 0800 073 1047, available daily from 7am to 7pm.

For press information only: