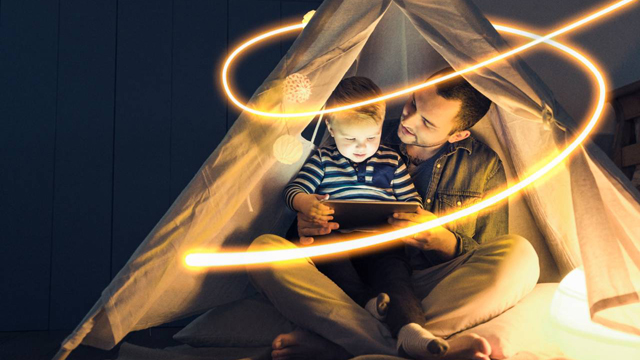 Future Energy Scenarios – the increased role of bioenergy and hydrogen

The Electricity System Operator’s Future Energy Scenarios (FES) outline four different pathways for the future of energy supply and demand over the next 30 years, including how our power is generated. We take a closer look at the role of bioenergy and hydrogen.

Three of the four Future Energy Scenarios show pathways that lead Great Britain to its ambitious target of net zero by 2050 and highlight just how dramatically the energy landscape will change in the coming decades.

So how might the energy system evolve to deliver low carbon energy to end consumers; when and where they need it to meet net zero?

FES considers total energy supply annually across sources such as bioenergy, natural gas and renewables, as well as how this ‘primary’ energy, which is often converted into electricity and hydrogen, meets consumer demand across industrial, commercial, residential and transport sectors.

Here we look at what the future holds for a range of different technologies and sources of energy, according to our FES analysis.

Bioenergy is energy produced from organic matter. This may either be from agricultural crops, grown specifically for that purpose, forestry residues or from the waste products of various sectors. It has an important potential role in decarbonising our energy system and wider economy when combined with carbon capture, usage and storage (CCUS) to deliver negative emissions.

In the FES scenario with the highest growth in bioenergy, the UK becomes an early mover in the developing global import market, resulting in access to around 275 TWh of bio resources (domestic and imported) by 2050. 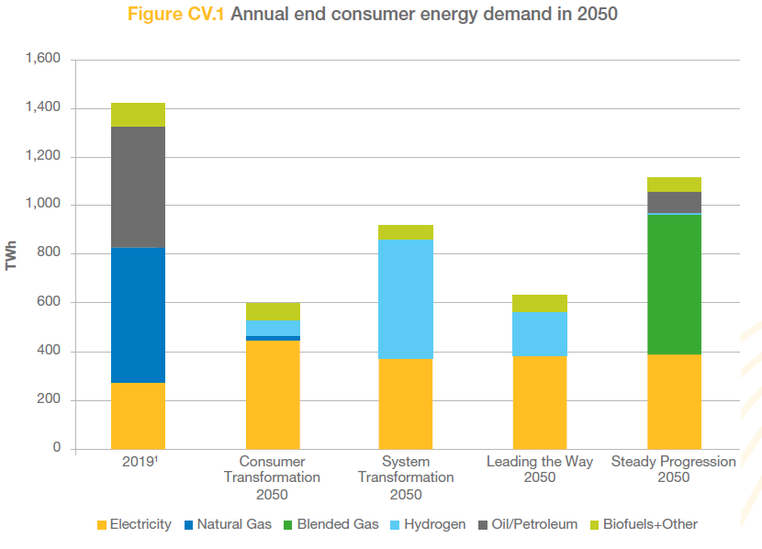 Hydrogen is one of the most abundant elements in the universe and can be produced from a variety of domestic resources, such as natural gas, nuclear power, biomass and renewable power like solar and wind.

FES shows hydrogen playing an increased role in the energy system, with at least 190 TWh of energy for hydrogen production required in all FES net zero scenarios.

It’s particularly crucial for net zero because of its potential ability to help decarbonise sectors such as heavy road transport and shipping, some of the hardest parts of the transition to net zero.

It also plays an important and complementary role in our highly electrified scenarios enabling long term energy storage, which in turn provides flexibility to manage different seasonal demands. An example of this is production of hydrogen using electrolysis when there are large volumes of renewable electricity, which can then be stored to help meet peaks in demand later in the year. 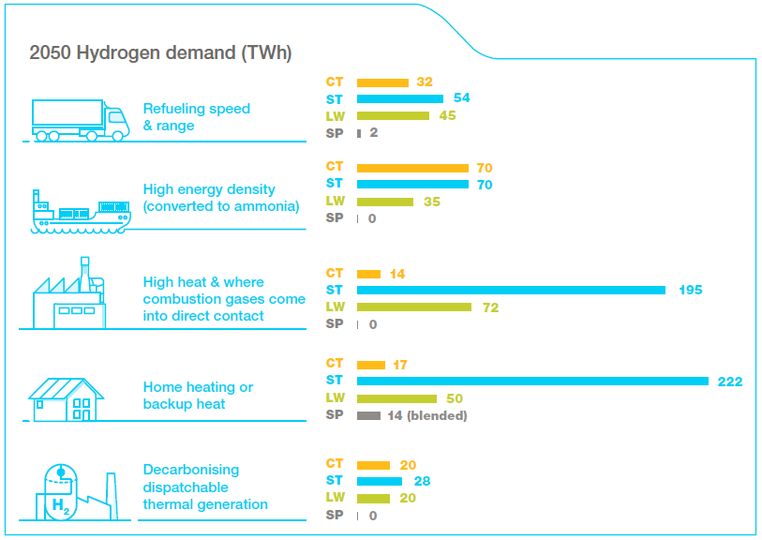 Renewable sources of power are increasing and are now a key part of Great Britain’s generation mix.

Our future analysis sees continued growth of wind and solar power, driving progress towards decarbonisation targets. Offshore wind continues to dominate renewable generation capacity, with up to 40GW of new capacity potentially being connected to the electricity system in the next 10 years.

The closure of subsidy schemes for solar photovoltaics (PV) has led to growth slowing over the last few years after a decade of rapid growth. We expect continued slow growth in the short term, but cost reductions, the renewed eligibility of solar PV for Contracts for Difference support, and co-location with storage should boost solar growth in the late 2020s.

Other renewable technologies, such as hydroelectric, marine and geothermal generation are also included in FES 2020. Hydroelectric and geothermal generation see more growth in the scenarios, which assume higher levels of societal change, but overall growth is low as they are limited by the available geography. Energy from waste generation declines in the net zero scenarios, as more environmentally conscious consumers adapt to low waste living, with levels of waste reduction increasing with the level of societal change.

Natural gas remained an important part of the energy mix under the previous 2050 target (i.e. 80% reduction in greenhouse gas emissions based on 1990 levels), but cannot be burned unabated in net zero scenarios. Instead, conversion to blue hydrogen (hydrogen produced from natural gas with carbon emissions captured as part of the process) or use alongside CCUS will be needed if it’s to have a role in net zero and this will require significant development.

High levels of electrification and hydrogen use mean that end user demand for natural gas reduces steadily each year, with the levels burnt unabated (without carbon capture and storage) halving by 2038 in the net zero scenarios. 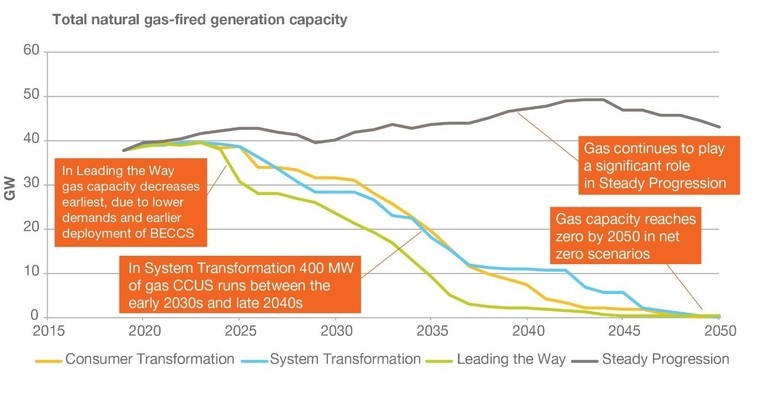 There is already significant progress being made, including the ESO planning to operate a zero-carbon electricity system by 2025, but it’s clear from FES that our energy system will need to rapidly transform to help the UK achieve net zero.